How to Highlight and Contour Your Whole Face 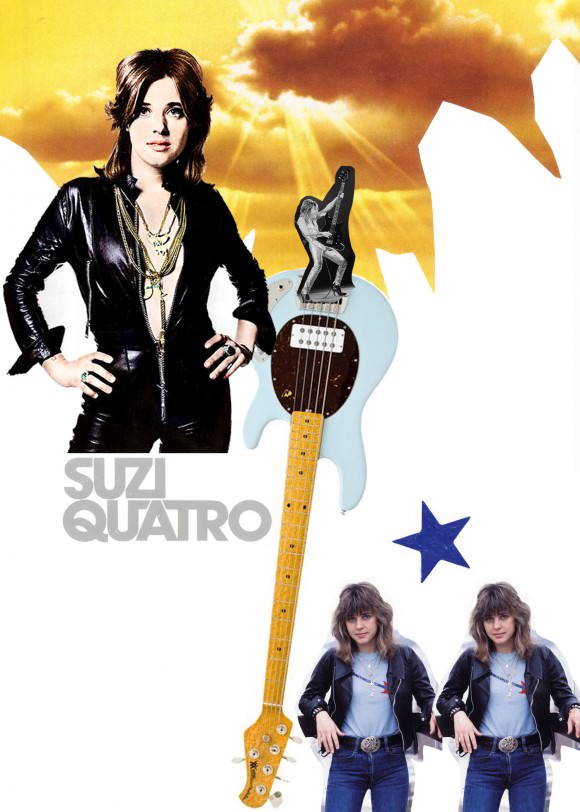 I first heard the music of glam-rock singer Suzi Quatro, aka the first widely successful female bass player, when I took a college class on David Bowie last fall. A few weeks in, our professor gave us a quickie introduction to some of the other artists in the ’70s glam scene, and Suzi’s “Devil Gate Drive” was squished between Roxy Music and Mott the Hoople in the mini-playlist of videos he showed us. The song and video, in all its black and white glory, was the most viscerally affecting track amongst our glam starter kit, and the only song on the mix I had never heard before.

At that point, I had been enamored with the likes of David Bowie, Marc Bolan, Iggy Pop, Elton John, and other artists of the glam-rock persuasion for a long time, but I hadn’t heard about Suzi until that video was projected on the screen in front of our windowless classroom. I was struck by her spunky, gutsy, and talented performance…and totally irked that that she was entirely new to me because of how deeply embedded the exclusion of women is in rock history. I immediately knew I had to learn more about this leather-jumpsuit-wearin’ glitter-rock queen. Suzi isn’t necessarily one of the first names that comes to most people’s mind when considering the genre, but the doors she opened and influence she has had on female rock artists is just as significant as that of all those dudes who get more credit than she does.

As a ’60s teenager growing up in Detroit, Suzi felt like she didn’t have any female role models of her own, so she sought musical inspiration from Elvis and the Beatles, like many other kids growing up during the birth of mainstream rock ’n’ roll. She and her older sister, Patti, formed a garage-rock band called Pleasure Seekers (later renamed Cradle). Patti made her sister take up playing the bass guitar, and music history is so, so thankful for that. The band played alongside the likes of Bob Seger, Ted Nugent, and Alice Cooper in teen clubs around the city, and in 1965, the Pleasure Seekers released the mod track “Never Thought You’d Leave Me” and the searing, fun “What a Way to Die.” Compared to that era’s male rock acts from Detroit, like the aforementioned Bob Seger and garage bands like MC5, the Pleasure Seekers have a distinct warmness to them. They’re seriously talented without taking themselves too seriously.

In 1971, Suzi was discovered by the British record producer Mickie Most, who was looking for a female rock artist to fill the gap left by Janis Joplin’s death. Most happened to catch a Cradle show while scoping out the talent in Detroit, and he was drawn to frontwoman Suzi’s spark and ability to carry both vocal and bass-playing duties. She left Detroit and moved to the UK, where she has remained ever since, and began a career as a solo artist.

“Rolling Stone” was an easy song for me to get into—it’s filled with the type of sunshine-y riffs that I love to blast while dancing around my kitchen, but I really connect with it because, as I navigate my 20s, I’m easily seduced by songs that celebrate empowerment and independence. At the time of its release, that single received a lukewarm reception, but the punchy, vibrant, and edgy “Can the Can,” released two years after Suzi’s big move, broke down the wall that kept many women from gaining huge success in the genre, and Suzi’s glam androgyny, raspy howl, and pulsating bass-playing became a European phenomenon.

Suzi easily harnessed the sound that theatrical early British glam bands like T. Rex became known for, making her a natural fit within the puzzle of that scene, but she was less a part of the collaborative, glam boys’ club of her peers. While T. Rex’s singer, Marc Bolan, and David Bowie, really helped shape each other’s identities at the time, Quatro seemed to be doing her own thing entirely, which was partially due to her status as one of the only women in glam. But her singularity in the scene didn’t seem to bother her too much, seeing as she dominated the European charts during the early ’70s without the help of the other glitter guys.

Even her look—a makeupless face and black leather wardrobe—was a perfect complement to the more feminine looks the men of that era were sporting. So many dudes in glam were celebrated for how subversive and “shocking” their feminized style was, but Suzi dressed the exact opposite way, stripping down her image and making herself more look more masculine. It was a cool, pointed reversal of how rock culture—and culture in general—usually venerates traditionally desirable women.

Although Suzi was a star in Europe, she was still fairly unknown in her home country. She continued making music intermittently all the way up to her most recent album in 2011, but her only Top 40 hit in the U.S. was a 1979 duet with Chris Norman, “Stumblin’ In,” a romantic soft-rock track totally unlike her previous work. This was because, back then, the U.S. wasn’t welcoming to female artists who didn’t play into stereotypes, and it wasn’t uncommon for American female rock acts to find wider success abroad if they wanted to make music without compromising their creative visions. On a recent winter-break talk show binge, I watched an episode of The Talk where Joan Jett spoke on how surprising it was for the Runaways to experience widespread popularity after being initially received very tepidly by American audiences. Maybe the acceptance Suzi found internationally is what kept her stationed in the UK even after her star began to fade—though, it must be noted, she did have one period of American fame as an actress on Happy Days, in the role of the brilliantly named Leather Tuscadero:

Although, as Joan mentions, she had a hard time finding an audience at first, she eventually brought the penchant for black leather and complete disregard for the “rules” of being a female performer that Suzi had established throughout the ’70s to mainstream American audiences. In the same way that Suzi’s softened-up single had been her only American hit, Joan probably received more success in the U.S. because of how much more accessible her sound was, but Joan has maintained that Suzi was one of her biggest role models when it came to making music: “I’d been screwing around with the guitar, and I think the fact that I was able to hear people like Suzi Quatro having success playing rock ’n’ roll made me think, ‘Well, if she’s doing it, why can’t I?’”

As a Quatro devotee, she incorporated much of what she had learned from Suzi into her aesthetic and sound—and spawned legions of Suzi-esque copycats in her own right. Suzi’s influence extends far beyond Joan and her fans, too: An entire generation of female musicians, and particularly bass players, were inspired by Suzi, including the Pretenders’ Chrissie Hynde and the Talking Heads’ Tina Weymouth, who learned the instrument by listening to Suzi’s albums. In a way, we have Suzi to thank for “Psycho Killer!” Isn’t that rad?

Despite her widespread impact on music and culture, I’ve brought Suzi up to many friends and music nerds since that initial Bowie class where I first encountered her, and am always surprised about how many times they respond, “Who?” Though Suzi basically jumpstarted a movement of female bassists that have revolutionized alternative rock—Kim Deal in the Pixies! Kim Gordon in Sonic Youth!—she remains on the sidelines of rock history for many people. Giving her her due is a tiny step toward dismantling an awful tradition of sweeping the female artists who helped shape popular music under the table.

Suzi’s legacy kind of reminds me of that famous Brian Eno quote about the Velvet Underground. He noted that The Velvet Underground & Nico, their iconic debut album, didn’t sell very many copies at first…but everyone who did buy one formed a band. Maybe the same can be said about Suzi—she barely broke in her home country, but she provided so many great artists from the U.S. and beyond with the kind of female role model she herself had wished for, but couldn’t find, as a kid. For this reason, Suzi Quatro’s iconic career and influence is worth shining a light on more often, and gives her total Hero Status to me. ♦