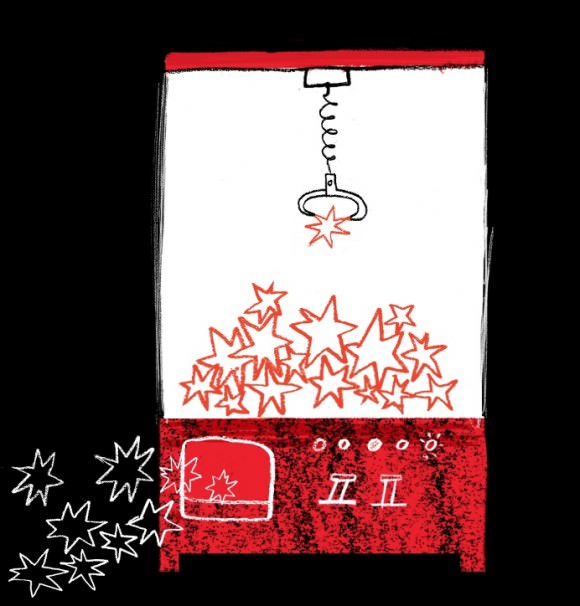 I’ve always been ambitious—academically and creatively—and I’ve always pushed myself hard. I needed straight A’s in school and was totally the person who tried to get her homework done while she was sick. Even today, when I have a day off work, I feel like I should be pouring myself into a project, like my new novel. My life’s motto could be this lyric from Lorde’s “Still Sane”: “I’m little, but I’m coming for the crown.” I’ve accomplished a lot, and my future goals are huge. A lot of the time, that makes me feel like a total champion. But there are days when (to paraphrase that same song) I’m feeling bruised and lonely because I’ve been trying to do EVERYTHING.

Like Sady said in her piece about self-care, which was hugely helpful to me, burnout isn’t just “the sort of thing that only happens if you are a fancy business lady whose job involves tough decisions and (preferably) shoulder pads.” For a long time, I accepted physical and mental collapses, like days when I couldn’t stop crying or get out of bed, as the price of doing what I wanted to do. But as they got worse and started happening more often, I realized I had to balance my goals not only with annoying, unavoidable limitations like time and my body’s need to rest, but also with my happiness. Fortunately, I’ve found ways to stay ambitious and “on the new shit” (obsessed with that album) and feel not just sane, but good.

At the beginning of this year, several Rookie staffers made überlists, which are amazing goal-setting tools that Danielle introduced to us (by way of a blogger named Nikol Lohr). You start by writing down 100 things you want accomplish that year, and then you add a few more things based on what year it is. In 2014, for example, we tacked on 14 additional things to make our lists have 114 goals in total. (In 2015, we’ll have 115 things on our lists, and in 2016, we’ll have 116—you get the idea.)

You can put literally ANY goal, task, or activity you want to try on an überlist (Tavi had “go to a roller-skating rink” on hers, and I’m happy to report that she has already crossed it off), but we also listed big things like “publish a novel,” “get a new job,” or “move into my own apartment.” Then something terrible happened: All of a sudden, even though our überlists were supposed to motivate us, some of us—myself included—started to panic. What if we wouldn’t get everything done? Why did we make public our loftiest, most important dreams, which were surely unreachable in the span of a year?

That’s when Danielle gave us this stellar advice to help break it all down: “Let’s say you want to get a better job. What do you need to do? Update your résumé. Spend an hour a day crafting perfect cover letters. Email friends to let them know you’re looking.” In other words: Your huge goals are made up of smaller, achievable tasks. Tackling them one by one can help you feel a lot less overwhelmed because you’re able to check things off as you go and congratulate yourself on real progress.

This can be especially helpful with projects you don’t have total control over—like landing a super-cool job or internship—because there are gatekeepers at the end of the path. I used to spend a lot of time obsessing over that point in the process, and those gatekeepers. When I couldn’t find a publisher to greenlight a book I wanted to write, I felt really depressed and helpless. Then I realized it was much healthier to look at all of the things that were still in my control. I could make and stick to a writing schedule, finish certain chapters by set dates, read books about writing to hone my craft, and figure out which publisher to approach next, and how. Even though my project felt monumental, and part of it wasn’t entirely in my hands, I could focus on all my successes along the way.

Breaking big goals up like this also helped me be more realistic about setting deadlines for myself. I had to figure out how long it took me to write one chapter before I could really estimate how long it would take me to write a whole novel. This leads me to another immensely helpful tip, which is to not punish yourself if you don’t finish everything you planned to in the amount of time you planned for.

When it comes to self-imposed deadlines, I’ve had to teach myself that they can, and should, be flexible. They’re there to keep me motivated, but they become less useful when I’m beating myself up for not meeting them, particularly when I did everything I could have done. All long-term goals (and speaking from experience, especially the artistic ones) are works in progress. It’s not AT ALL a failure to realize you want to or have to go in a different direction or take a step back. I’ve had to do this with half the manuscripts I’ve written, and in the end, they were always better for it.

It’s also OK to realize that your priorities have shifted and you no longer have the drive to meet, or interest in meeting, a certain goal. I’ve always felt bad about walking away from a task, but goals aren’t just about checking something off a list—they’re about ADDING something to your life. If all a project is doing is sapping your time and energy, it might not be worth it.

3. Don’t try to do everything at once.

I used to be the queen of multitasking. It seemed like the only way to fit everything in! I read and studied while I ate. I wrote blog entries or replied to email while I watched TV. I flipped back and forth between IM conversations and essays I was working on. More often than not, when I tried to double up on tasks, it was one work thing + one fun thing. I felt like I couldn’t justify taking time for something I loved if I wasn’t also doing something productive. I also felt guilty about neglecting my friends because of work, so I tried to keep up with them while doing something else, too. This created three different problems: (1) It took me a lot longer to do things, (2) I didn’t do things as well as I would have if they had my focus, and (3) I couldn’t completely enjoy anything.

At first, I blamed myself. I thought if I was just more efficient and better at time management, I’d be a more effective multitasker. But after talking to my friends and a therapist about it, I realized that it’s multitasking itself that is inefficient! Much more helpful, to me at least, is making lists (yes, I LOVE LISTS).

At the beginning of each week, I write down everything I need or want to do—assignments with deadlines, my personal writing projects, plans with friends, etc. Then I rank things in order of importance, so the project with a hard, imposed-by-someone-else deadline comes gets top priority, followed by personal projects, etc. I also look at social stuff differently now. I evaluate how much I really want to go to that party and whether it feels more important to focus on my work that week or hang out with friends. Then I bust out my trusty day planner and schedule time to do each thing—and only that thing—throughout the week.

Inevitably, some things run long, and I have to readjust. Sometimes I even blow things off! And none of this is to say that I don’t ever multitask. But having a schedule has made it easier for me to figure out how much I can actually handle, and when I can let things slide instead of pulling an all-nighter to meet a deadline.

This is another thing that came up among the Rookie staff when we were making our überlists. A few of us had some time off from school and work coming up, and—AGAIN—we felt like we should be doing something productive instead of going on Netflix binges. If we were going on Netflix binges, we felt like we should be watching Important Documentaries or Meaningful Art Films instead of rewatching 30 Rock or Star Trek: The Next Generation.

But then Tavi wisely pointed out: “There are two parts to work: the actual work, and then the stuff you do to make sure you LIKE your work—the stuff you do to feel inspired. It’s important to have time to remember why you like life.”

Allegra says that she justifies breaks by reminding herself that they make her work better: “If I don’t take an hour off to turn off my brain and take a breather, this thing I’m trying to get done in 30 minutes will actually take three hours,” she says. She also sets stopping points for herself: “Like, OK, I’m gonna bring it, but at 8 PM, I’m out.”

At a certain point, you just have to power down so you’ll be fully charged for what’s next. I try to stop working at the same time every day, and then I reward myself for everything I did with a favorite TV show, time to read, or, lately, Girl Scout cookies. Sometimes I partake in all of the above, because I know I deserve it. When I meet bigger goals, I give myself bigger rewards. I plan vacations around my writing schedule so that the trip is my way of congratulating myself for finishing a major part of a book. If I can’t travel, I get a manicure or a plan a celebratory meal with my friends.

One of my favorite things about my überlist is that there are things on it—like making a new mixtape, or ditching work on the first nice day of spring, or rewatching a favorite TV show—that are pure fun. And crossing those things off makes me feel just as accomplished as knocking out the bigger, more ambitious projects. I’m DEFINITELY coming for that crown. But when I get it, I’ll have a smile on my face. ♦