I hated high school so much that I studied my way out. 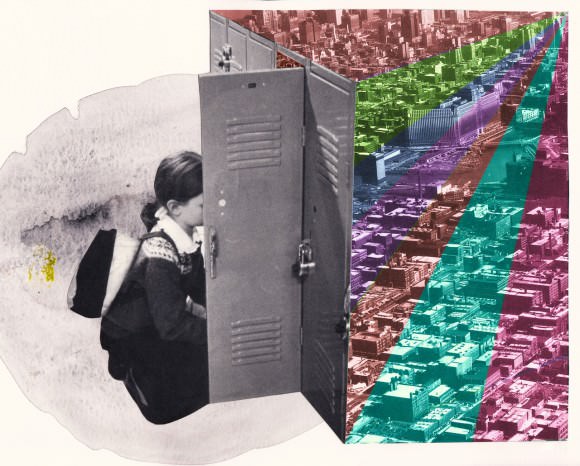 When I was a junior in high school, my friends and I fantasized a lot about running away from our homes in suburban Illinois. We daydreamed of finding some big abandoned house in Minneapolis or San Francisco, making our livings busking in the streets or selling zines and art in coffee shops and punk shows. When we talked about leaving town, we all claimed it was because we were just bored, but I know that most of us had some pretty serious problems at home or at school that we wanted to get away from. Some of them dropped out and just took off, which seemed so exciting to me, but I was a straight-A student who’d been looking forward to college since grade school. I just couldn’t let anything get in the way of that. So I stayed, and I suffered, becoming more miserable with each passing school day.

Then I met Jo. She was in my gym class, and we had a lot in common: We liked the same bands (especially R.E.M.), and neither of us was athletic or popular. We got to talking, and she told me that even though we’d started high school together, she would be graduating in June—one year earlier than me and everyone else in our class.

I was blown away. Jo was smart, but I knew she wasn’t taking advanced-placement classes, which counted toward college credit. How was she suddenly a senior?

“Practically everyone graduates high school with way more credits than they’re required to take,” she said. “Guidance counselors and teachers don’t tell you that because they seem to think we need four years of school for, like, educational and emotional reasons.” Then she told me to look closely at our state’s graduation requirements to see what they actually were (they vary from state to state; you can find links to each state’s department of education here). An advanced-level math class taken in eighth grade, for example, might count as a high school credit. She also explained that even though you needed four years’ worth of English classes, our school didn’t prevent us from taking more than one English class in a semester. “That’s what I’m doing now,” she said.

I hammered her with questions. Did she have to give up study hall or lunch to cram in more classes? (No.) Had she gone to summer school every year? (Just twice.) She had decided to start working toward early graduation when she was in 10th grade, and had carefully strategized her course load every semester thereafter. She’d had to sacrifice a couple art and philosophy electives she’d been interested in, but she figured she could take classes like those in college. “Go talk to your counselor,” she said. “Maybe you can graduate with me!”

I skipped lunch that day to talk to my guidance counselor. I learned that, since I was a year behind when Jo started working on this, I would have to seriously overload my schedule, take summer school, and give up study hall and lunch to graduate with her. But graduating one semester early didn’t overload me at all! In fact, if I planned my schedule just right, I could even leave school early each day to go to work, so I could save money to get out of dodge!

My guidance counselor did not want me to do this, because it required selecting my classes just because they met the graduation requirements, rather than staying on the high-level honors track I’d been on. Graduating a semester early meant I’d be missing out on taking several AP classes. “With those, you’ll be able to finish college early,” he said.

I argued that I hopefully wouldn’t hate college or want to leave sooner than I needed to. “I hate it here,” I explained. “I want to get out. I need to get out to stay sane.” We debated for a while longer before he finally conceded that it was really up to me and my parents.

I prepared the most complete argument possible before I approached my parents. I knew that the first question they would ask was what exactly I planned to do with that semester off, and if I told them, “Get the hell out of this godforsaken town,” they would either shut me down or insist that I stay at home and take community college courses until I started at a four-year college or university. What I wanted was a semester off, but I’d never heard the term “gap year” at the time.

When we sat down to talk, I had the course catalog for my high school and my academic plan to graduate a semester early. I also brought the records from my savings account, a pay stub from work, and a budget that would help me save the couple thousand dollars I’d need by the time I graduated. (It was 1996, and $2,000 got you a lot further then.) I wanted to show them that I would be able to afford an apartment, food, and all the other living-on-your-own expenses I’d have if I left school and home. I calmly explained that I believed it would better for my mental health to leave town as soon as possible, and partially so I could cut ties with my abusive boyfriend and my self-destructive friends. I argued that having a little bit of life experience before starting college would probably come in handy, and I assured them that I wouldn’t be going alone: Once I’d found out about graduating early, a friend decided to do the same thing so she could move with me.

I won half of my case: My parents let me graduate early. But they were against my moving out of town—at first. Before agreeing to that plan, they wanted to see that I was actually going to stick with my job and save money because, as they rightly argued, that’s what I’d have to do during the months I planned to live on my own. The next summer—after I’d held my job for many months, kept my grades up, stuck to a budget, and spent a week at home alone while my parents were on vacation without burning the place down or getting arrested—they finally agreed to let me move out of state when I graduated in January.

My final semester of high school was OK—I wasn’t running myself into the ground, though I did have to sacrifice a creative writing class I’d always wanted to take because it didn’t fit into my new schedule. I used Jo’s I’ll-take-it-in-college logic and ended up adding a credited class that turned out to be very practical: auto shop. (Even if you don’t plan to graduate/move out early, I highly advise taking a similar life-skills course—you never know when you might need to do something like change a flat tire, and handling it on your own feels like huge triumph.)

That January, after I graduated, my mom dropped my friend and me off in Madison and said goodbye. I quickly realized that renting an apartment, getting a job, budgeting, and buying and cooking my own food were only a small part of actually living on my own. Those were the things I could study up on and prepare for—and I’m very glad I did—but the true tests were the daily decisions I had to make to ensure my own happiness, comfort, and safety. Admittedly, I wasn’t great at those things all the time, but I learned as I tried.

That fall, when I started college in Ohio, where I had to share space and set boundaries with the 10 girls in my dorm hall, I was a lot better at speaking my mind and making a case for what I wanted. I’ll always be happy that I got a head-start on that. ♦