On a different kind of consumption. 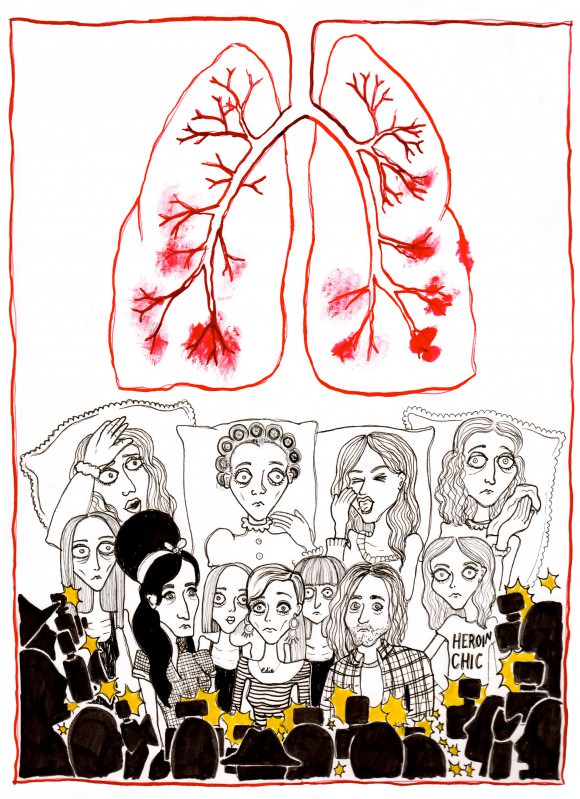 Once upon a time, a disease sparked a beauty revolution.

It was the 19th and early 20th century in the Western world, and there was no such thing as widespread sanitation. wash your hands signs didn’t exist. Running water didn’t really exist. The disease in question was spread via coughing and sneezing, and people were dropping like flies. In 1815, one in four deaths in England was attributed to the illness; in 1918 it was responsible for one in six deaths in France. This disease has always been around wherever groups of humans live together—there’s evidence of Egyptian mummies who died of it around 4000 BC. It wasn’t until the 1800s and the Industrial Revolution, however, that it became a widespread epidemic.

It was called consumption then; it’s now known as tuberculosis, or TB. It was and is a highly contagious disease, mainly of the lungs. It got its original name because it seemed to “consume” its victims, leading to rapid weight loss, fever, night sweats, and coughs that produced blood. (Tuberculosis causes terribly painful coughs that cause you to choke—actually choke—on your own blood.) Sounds horrible, right? Believe it or not, once upon a time, it was considered stylish.

That’s right—back in the 1800s, if you had to die, consumption was the way to go. It claimed many famous victims, including the poets John Keats and Robert Louis Stevenson and the novelists George Orwell and the Brontë sisters. It provided a romantic demise for the heroines of operas such as La Traviata and La Bohème. In her book Spitting Blood: The History of Tuberculosis, Helen Bynum says that consumption seemed to “lend its victims an air of noble suffering and heightened sexual allure.” She relates a story told by the writer Tom Moore, who visited Lord Byron (the poet) one day. “I look pale,” Lord Byron is said to have told his friend. “I should like to die of a consumption.” When Moore asked him why, Byron said, “Because the ladies would all say: ‘Look at that poor Byron, how interesting he looks in dying!’”

Today, it’s not unusual for style to trickle “up” from poor and working-class people to the rich and powerful: Look at hip-hop, for example, or skater style. But back then, the ruling class usually dictated fashion for everyone. So it’s peculiar that this disease, which struck the urban poor, who lived in crowded and destitute conditions, at much higher rates than it did anyone else, became aspirational. In high society, consumption’s ravages were seen as aesthetically pleasing—the illness and its effects were romanticized. It made you thin and waiflike (fashionable!). The loss of blood made your skin pale—really pale (sooo fashionable). The high fever made your eyes bright, and your cheeks stayed rosy red, as if you’d just dabbed on some blush (omg so fashionable!). Plus, death from consumption wasn’t sudden. Its victims wasted away, preferably propped upon a bed of lacy white pillows in an elegant dressing gown while everyone cried around them. Fashion was imitating the most tragic parts of life, and perfectly healthy women began trying to look extremely pale and thin.

Of course, poor people didn’t die propped on lacy white pillows; they died in droves, in scary, prison-like “sanatoriums,” in the streets, and at home. The disease was considered fashionable only for those who had the time and the resources to care about fashion. And, as trendy as it was, disease-wise, “fashion” seemed to conveniently forget about the inevitable result: You wound up dead, no matter how rich or stylish you were. Rich or poor, chic or shabby, eventually your fever would spike and—sorry to keep repeating this, but it is hard to overemphasize—you would choke on your own blood. Sooo stylish, no?

Ugh. This is so fucked-up to me! We have a vaccine for tuberculosis now, but the disease hasn’t gone away in many developing countries, striking an estimated 8.6 million people every year, and killing 1.5 million of them, according to the World Health Organization. At least, I guess, we know better than to romanticize it anymore. I mean, isn’t that crazy that a fatal disease could ever have been stylish?

JKJKJKJK WE’RE STILL IDIOTS. Many of you weren’t alive in the 1990s, and the rest of you were barely sentient, so allow me to tell you about something called heroin chic. This was a legit aesthetic movement that seemed to glamorize the visible symptoms of drug addiction. Models in mid-’90s fashion mags were pale and emaciated, with dark circles under deadened eyes. Much like consumption in the 19th century, heroin was suddenly widespread in the ’90s, having trickled up from the lower classes to high-style status among the rich and the middle class. Rock stars were doing it. Models and actors were dying from it. Popular movies that involved heroin use—Trainspotting, Pulp Fiction, Kids—were huge hits, and guess what? Everyone wanted to look like their favorite movie characters, movie stars, and rock idols. Overdosing on heroin—like Stefanie Sargent from the band 7 Year Bitch or Kristen Pfaff from Hole—was a “fashionable” way to die.

Except, no. Sargent and Pfaff were both found alone and dead in their apartments. Dying from a drug overdose doesn’t make you glamorous—it makes you dead. Every time a pathway to death is glamorized, it always conveniently leaves that part out.

This also reminds me of the 27 Club, which Stephanie wrote about here. It’s a name given to a group of famous musicians who all died at the age of 27, including Amy Winehouse, Janis Joplin, Kurt Cobain, and Jimi Hendrix. When Amy Winehouse passed away, I remember hearing someone say she was “even stylish when she died.”

YOU GUYS, THAT IS FUCKED UP. There are no stylish ways to die! None. Zero. I was riding the bus home back in October when Cory Monteith’s death from a drug overdose hit the news. Two girls sitting behind me were discussing it:

“Drug overdose in a hotel room,” the other one said.

“That’s how everyone famous goes.”

As if there’s some “right” or “wrong” way to die. UGH. You guys! Dying is messy. It’s lonely. It’s gross, and it’s tremendously sad. We romanticize James Dean, the handsome 1950s actor who cruised around on his motorcycle; we fetishize all those pictures of him leaning dashingly against the side of a fast car. He died too young, in a high-speed car crash, and his death is an important part of his mystique. But…have you ever seen someone die in a traffic accident? I have. It is absolutely terrible, a death I would wish on no one, a death that is so far removed from “dashing” that I don’t even know where to begin. As an exchange student in Italy, I was rounding the corner to my apartment one day when I saw a teenage boy on a scooter fly past me at top speed and fail to stop in time at the intersection stop sign. It was a busy street. A car hit him; he flew into the air like a doll. No helmet. It was anything but cool.

There is no such thing as a “cool” or “fashionable” death. We all die alone, and it’s never stylish, whether it’s by way of consumption, drug abuse, the 27 Club, or whatever tragedy is in vogue at a given moment. Only those who have never died could be foolish enough to believe otherwise. ♦