The greatest thing I learned from my mother was to never stop moving. 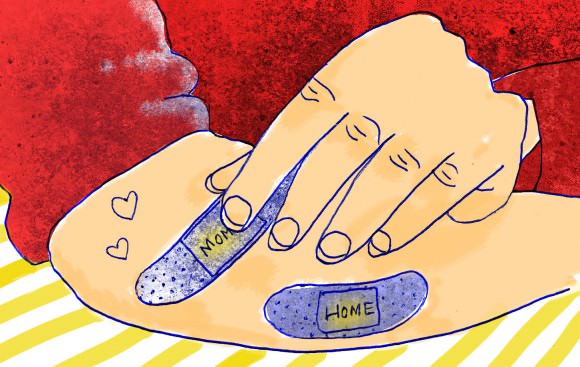 For as long as I can remember, my mother has gotten what she calls “the urge for going,” after the Joni Mitchell song of the same name. She has an impulsive need to pick up and start her (and, when I was younger, my) life over in a whole new place—a feeling that I didn’t understand until recently, when I began to notice it in myself.

My parents split up when I was six, and my mom took me to Los Angeles. When I think of the house where we lived there, I remember dream catchers, coyote skulls, and motorcycles in the driveway. I was an anxious only child with a tendency to cry at the slightest provocation, and I was afraid of my mother’s mystical belongings. (Would those coyote skulls bite me in the night?) But some of them protected me: When I had bad dreams, my mother would light a bundle of sage, and the smoke would fill the corners of my bedroom with thick, pungent smoke. It always made me feel like her magic was watching over me even after she’d left the room.

Right before my 10th birthday, we left California for reasons unknown to me at the time—I was too young to understand the urge back then—and moved to New York. My mother found a new community in a Buddhist sect called Shambhala, and I gave myself to the practice fully, or as fully as you can at 10 years old. Although I had friends at my fancy private school, I mostly kept quiet about my life at home—I felt like I stood out because I was poor, too weird, or too hippy-dippy. But outside of school, my mom and I had found a solid foundation in our newfound spirituality. I was grateful for the stability, even though I barely understood most of the rituals or concepts we observed.

Soon after I turned 15, we moved to Nova Scotia, where my mom had gotten a job editing a spiritual magazine called The Shambhala Sun. At first, I protested the change, but when we arrived, I felt immediately at home. The Buddhist population there was enormous, and I no longer felt as though I was the only kid in my school who grew up like I did. My friends and I talked about meditation as regularly as my old classmates discussed their country houses. The camaraderie that had previously existed for me only on holidays or at teachings I went to with my mom was now a routine part of my life.

My mom felt differently, though, and just a year after we arrived in Canada, she got the urge again. She decided to move back to New York after falling in love with a woman who lived there and leaving her job at the Sun. When she asked me if I wanted to go with her, I said no. Just a year earlier, I would have killed to stay in Brooklyn, but now I couldn’t think of leaving my comfortable, stable world in Canada, no matter what my mom’s urge was telling her.

She bought a gold Volkswagen van and drove back and forth between New York and Halifax, staying at each place for a week or two at a time. When she was away, I was on my own. I ate spaghetti and microwaved Rice Crispie Treats, went to choir practice, and had the occasional party, but most of all, I missed her, and I kept missing her even when she was back. I wanted her to hang out, watch TV, and be present with me instead of on the phone with her girlfriend in New York, where I felt like she would have rather been.

Despite my love for my friends and school, I began to feel more and more anxious and lonely when she was gone. One night while I was home alone, I watched The Sixth Sense on cable, and something about the ghosts in the movie, who were restless and frightened even in death, got to me. I suddenly realized that there would come a moment, just like this one, when I would die. My heart went cold, like a block of ice was resting on my chest, and I was viscerally, enormously afraid. I knew about death as a concept and had been taught about reincarnation from an early age, but fearing my mortality was something entirely different and new. I didn’t move from the couch for hours, afraid to put my feet on the ground.

My downstairs neighbor, Zoe, a girl in her early 20s, would coax me downstairs and out of my isolation a few days each week. Although she was also involved with Shambala Buddhism, she seemed to express her spirituality by traveling around Nova Scotia as the captain of a sailing camp and dancing with wild abandon, reaching her arms out to grab me until I couldn’t resist being pulled into her, dervish-like. Zoe taught me about quinoa and painted her naked body blue for special occasions. She was purely herself, as if she was grown from rich soil and given only the freshest water. As long as I lived in Halifax, she kept my block-of-ice feeling at bay.

Over time, though, I continued to feel more and more distant from Buddhism, and from my mother, whose flightiness I had come to resent. I decided she was crazy, and that I was nothing like her. I still loved her, of course, but in my mind, we were fundamentally different. After I graduated high school, I stopped communicating with anyone from the community I grew up in and treated my mother’s practice with derision.

In the years that followed, I began to feel the urge myself, but I agitated against it rather than admitting I was anything like my mom. I threw myself into my job and a relationship that I knew weren’t right for me just because I wanted to pursue a kind of stability I had never had, and in doing so, I made myself miserable, culminating in an awful breakup and a realization that my life needed to change: I couldn’t continue to deny my urge if I wanted to be happy, and I finally gave into it. I bought a plane ticket to Europe, and at the end of my trip, I stayed alone in Berlin for three days. While I rifled through records at a flea market, I saw a stall selling animal skulls, and I didn’t wonder if they were going to bite me. I spoke to my mother every night over Skype—I wanted to tell her everything I could because I knew it was her who gave me the urge to experience such a brand-new, wonderful world like this.

My time away helped me figure out that the urge didn’t have to mean being far from my life or the people I loved—I could seek out the electric wonder I discovered in Berlin everywhere I went, even in places that were already familiar. In the months that followed my trip, I chased after change, and while parts of it were confusing and scary, I also saw many beautiful things: I traveled all over the country for work, adopted a kitten, and switched jobs. In fact, I was at a business dinner in New Orleans when I got the call that Zoe had been hit by a drunk driver and died.

I attended a Shambhala memorial service for Zoe with my mom back in New York. It was conducted in a friend’s living room, which was filled with the sweet, hot smell of incense. The main part of the ceremony involves burning a photo of the deceased while praying, and before we began the chants, we listened to a tape of her longtime partner speaking at the ceremony that was held for her in Halifax, where hundreds of people had come to remember her. He said that he wanted everyone to know that although Zoe was strong and filled with magic, she was also very scared. “She was so afraid,” he said, “but she kept living anyway.”

I sat next to my mother, who had come with me to remember Zoe, on the couch while the photo started to burn. As I saw Zoe’s face become consumed by flames, I felt afraid, too. I was fearful, and anxious, and angry; the block of ice was once again on my chest. I began to weep and, as I said the prayer, completely gave in to my fear. Suddenly, though, I felt a heat radiating at my side, and I leaned against my mother with the whole weight of my sadness. She was right where I needed her, and that was all that mattered. Even though I was scared, I knew I wasn’t alone.

These days, I understand my mom more than I ever thought possible. I’ve realized that my urge for going is born from and shaped by, hers, although we experience them differently—she craves new places and circumstances, while I seek out loving communities and creative fulfillment. Now, when I get the urge, I don’t fight it anymore. Instead, I feel grateful to have a mom who taught me to chase after it. ♦

Maud Deitch is a Brooklyn-based writer and poet. Her poetry zine, Trouble Forever, was published by Birdsong Micropress in 2013. She is very interested in magic of all kinds. You can follow her on Twitter @mauddeitch.