The not-so-secret password to fun, adventure, and lifelong happiness. 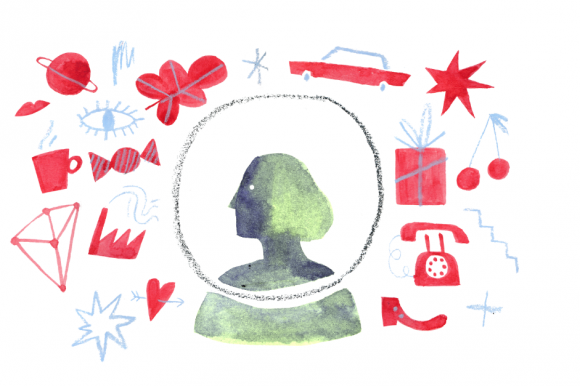 Escape of any kind—whether it’s cutting math class, busting out of prison, or taking a solo trip to Bali—rarely happens by accident. It usually requires serious action, something I didn’t understand for the longest. I spent my entire youth sitting around waiting for the boys I had crushes on to magically fall in love with me, and was somewhat flummoxed when they didn’t. It never occurred to me that I would actually have to do something to make that happen.

While my total passivity in all matters concerning my own preferences and desires was totally ineffective in getting those preferences and desires fulfilled, I wasn’t ready to just get out there and TAKE WHAT WAS MINE. I was still too insecure, too unsteady on my feet, to make demands. In retrospect, I bet that if I had just insisted on getting what I wanted, I would have gotten most of it. Even if you’d told me that then, though, I wouldn’t have been able to do it. What I do wish I knew then is something I’ve only recently discovered, which you will hopefully make good use of while you’re still young. It’s the secret to making all kinds of fun things happen, and it can be summarized thusly: SAY YES.

Saying yes, as a rule, to what’s offered/suggested to you is a perfect halfway point between going out there and taking the world by storm and waiting in your bedroom for something exciting to happen. (Sitting in your bedroom is a wonderful way to make certain things happen, like taking naps and singing songs to your cats, but you know what I mean.) Saying yes is the first and easiest way to actively choose a different kind of life.

The summer after my freshman year of high school, I met a pair of fraternal twin boys. They were two years older than I was, and the best-looking, most mysterious creatures for miles, the kind of boys that prompt urban legends. (“I heard X was in a mental institution!” “I heard Y climbed out the window of his English class!”) One of them was fair and as handsome as a movie star from the ’50s; the other one was dark and brooding and, oh god yes, my favorite. The brooding boy was my friend, in a way. On a few occasions, he picked me up in his parents’ minivan and we cruised the streets. Sometimes he came over and skulked around my bedroom, looking at my bookshelves and photos and (I hoped) me. I would sweat profusely and not know what to say. Whenever he asked me to do anything, I quickly did the math in my head: Was I too terrified to say yes? I usually was.

The big test was when he invited me to go to his parents’ house in the country for a weekend—with other friends, not just the two of us. I lied and told him my mother wouldn’t let me. The idea of spending that much time with him was too scary to be even a little bit fun. What if (IF!) I had to go to the bathroom? What if I farted? What if he tried to kiss me? (OK, maybe that one was an exciting/scary idea.) What if he realized I’d told him that Nebraska was my favorite Bruce Springsteen record because it was the only one I had? I felt like I had to say no. Looking back, I think the boy thought I was vaguely mysterious, sort of unknowable and cool (ha!), when in reality, I was too afraid to speak.

College was much the same—I liked boys but didn’t know how to actually make them my boyfriends. I had friends I loved but was afraid to tell them when they hurt my feelings. I was basically the most extroverted, loudmouthed shrinking violet on the planet. Most of my professors thought I was an idiot, and they were right. They were right because I was pouring all my energy into my diaries, and none of it into action. I wanted to be a writer, but I was so scared of taking a college-level fiction class that I (laughably) proclaimed it was “beneath me.” (It wasn’t.)

But all that time, I was getting ready. You know how marathon runners eat a huge plate of pasta the night before a race? That was me, for my whole life. I was storing things up—unrequited love, ambition, drive, all of it. As soon as I graduated, something clicked. I’m not sure what the magic ingredient was that prodded me into action—it may have been being far away from the competitive atmosphere of college, and feeling (right or wrong) like I was finally an Adult. But something got me off my ass, and I started to WRITE. I wrote a novel in three months, and then another, and another. I was on fire. Were my novels any good? No. But it didn’t matter. Because I was in motion, working as hard as I possibly could toward a goal. You couldn’t have stopped me with a brick wall.

I applied to four graduate schools, and got into one. Disappointingly, it was the one I least wanted to go to: The University of Wisconsin–Madison (go Badgers!) was the farthest one from my home, in the town my (serious) boyfriend was least psyched to move to. I was scared to move away, and to force an unwanted change on my partner. I made myself do it anyway. And grad school turned out to be one of the greatest experiences of my life. I loved the program and I loved living in Madison, and the boyfriend who moved there with me became my husband, another big YES in my life. (If living through three Wisconsin winters with someone doesn’t seal the deal, nothing will.) I never would have had that experience had I followed my instincts instead of throwing caution to the wind. Because at the time, my instincts were inclined toward self-protection, not growth or happiness. They were based on fear, which is the worst reason not to do something that you suspect might be good for you.

I’m writing this to you from a borrowed bedroom in Nashville, Tennessee, some 900 miles from my bedroom in Brooklyn, my husband and our four-month-old son in tow. Why? Because I said yes to a job that, at first glance, sounded impossible. My mentor from Wisconsin (see above) had recently moved to a job at Vanderbilt University, and there was a job opening for the spring semester—just one semester, four measly months. The pay wasn’t great. They wouldn’t pay our moving expenses, or put us up, or offer benefits. I said yes anyway. We found a house swap, strapped the baby in the car, and sent the cats to my parents’ house. I’m not sure it makes great financial sense, but it makes FABULOUS adventure sense. The questions I asked myself were: Will this opportunity ever present itself again? Will I regret it forever if I say no out of fear? So I said yes.

If I’m being fully honest, I don’t always follow my own advice. Whenever I get an email about someone’s birthday party at a bar, I know there is a 3% chance that I’ll go. The same goes for seeing anyone’s band, and the chances dwindle down to nothing if the band is supposed to play after 10 PM. I could blame this on my very small baby, but it’s not his fault. I don’t much like going out at night, and parties full of strangers make me anxious. Still, what fun stories am I missing out on by staying home?

Here in Nashville, I drive by a row of bars—honky-tonks, they’re called—every day, doubtful that I’ll ever go inside. Maybe if I say yes here, right now, it’ll force me out of my comfort zone. Put the baby to bed and put on my dancing shoes? Say yes, Emma, say yes. ♦