Literally the Best Thing Ever: The Journal of Emily Shore 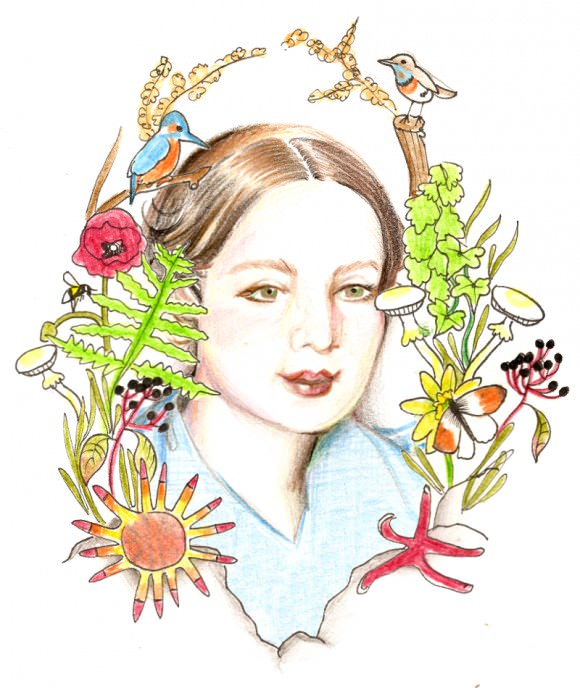 I believe that if I were chained for life to Woodbury, and never allowed to ramble from it more than three or four miles (the utmost limit of my walks), and excluded as I am, by its situation, from all the birds that haunt mountains, rocks, and the seaside (that is, haunting them peculiarly), and from most kinds that haunt all sorts of waters—I believe that even in this situation I should forever be discovering something new.

These are the words of Margaret Emily Shore, age 15, written in her private journal on April 16, 1835. She kept a journal for eight years, from the age of 11 till she died, at just 19, of tuberculosis. Fifty years later, her journals—all 12 volumes—were published by her sisters, Louisa and Arabella, who wrote in the introduction that after Emily died, they figured her own words would “serve better than any formal biography to preserve a memory.” However, they added, they knew that their sister’s diary was “scarcely material of interest to the present generation.” I beg to differ, and I will.

Born on a cold Christmas day in 1819, Emily had a short and pretty uneventful life. She grew up in the rural heart of eastern England with her mum and dad, two sisters, and two brothers. Her illness confined her, for the last three years of her life, to her home and its gardens. Her diary, therefore, isn’t very action-packed. There are no school dances or vacations. This is instead a record of one person’s inner life. But because of Emily’s independent spirit and her intense curiosity about the world around her, it is entirely captivating. I challenge you to read a single entry without falling in love with her. To wit:

May 5, 1838
Oh, it was delicious. It was the first evening walk I have had for seven or eight months, and it seemed to me like paradise. There was just breeze enough to temper the heat of the descending sun; the sky was cloudless, the birds singing joyously, the air scented with wallflowers and primroses; the shrubs were tinted with the fresh green foliage of May. And oh, the soft, soft, cool green turf! I ran about it as if I was still a child; I stooped down and pressed it with my hand; I quite loved it, for it reminded me of spring and Woodbury. I rushed about hither and thither, unable to control my delight; I took off my bonnet and stood still to let the air blow through my hair and cool my face.

In these pages, Emily wrote about politics, science, art, and books. But her journal was first and foremost a nature diary, where she recorded the splendor of the flora and fauna surrounding her house. She recounts days spent scrambling over hills with her brothers and sisters, hunting for glimpses of unusual birds, or plants and flowers to take home as trophies, and her sheer enjoyment in the freshness and variety of nature leaps off every page, but her attention to detail is equally astounding. She scrupulously notes the movements of ants and wasps, the colorful markings (right down to the orange “hairs beneath the body”) of a “beautiful” caterpillar, and the subtle distinctions between the songs of different birds. At one point, a description of “an upright, leafless, undivided stalk, with a pinky bunch of buds at the top” fills almost an entire page. “It is impossible to conceive the beauty of this flower,” she writes, “and I am very proud to have found it.”

When Emily was alive, there was no cure for tuberculosis—antibiotics hadn’t been invented yet. The disease killed a quarter of the population of England in the 19th century. Before it kills you, it gives you a fever, chills, and night sweats, saps you of all your strength and energy, and makes you cough up blood in increasingly alarming amounts.

Throughout all this, and even when she was finally confined to her bed, Emily always found solace in nature. She made her bedroom into what she called a “lion’s den,” filling it with wonderful and bizarre objects from outside: stuffed birds, bird’s eggs and bird’s nests, a collection of “ferns and mosses,” a box of minerals, and 58 engravings of “figures, heads, birds, and beasts, etc.” pinned to the walls. “I feel completely independent in it,” she writes in her diary. “It is somewhat grotesque and singular. I like it all the better in consequence.”

“Nature diaries” were all the rage in England at the time, but Emily’s stood out because they had a scientific, rather than a nostalgic, view on nature. She seems to have read books and journals about the natural world constantly, and would interrogate anyone who entered the house for new facts. “Mr. Tebbut, the hair-dresser and bird-fancier of Potton, was here today,” she writes in December 1834, “and I obtained from him a good deal of information about birds.” (Great work, Em!) I am always amazed at Emily’s dedication to her work, and sometimes even freaked out by it. As young as 12, Emily berates herself for getting up “as late as half-past seven”; on another occasion, she says, “Unhappily I did not wake till 10 minutes to five, and consequently did not see so many birds as usual before breakfast.” Ten to five?! Emily, relax!

At one point she speculates that her obsessive study of plants and animals may have contributed to her getting the disease that would eventually kill her. In the bleak winter of 1836, suffering from headaches and chest pain, Emily writes:

In looking back on the beginning of my illness, I feel sure that one of the principal causes of it was overworking my mind with too hard study, which is no uncommon cause of consumption. For many months before I was actually ill, I tasked my intellectual powers to the utmost. My mind never relaxed, never unbent; even in those hours meant for relaxation, I was still engaged in acquiring knowledge and storing my memory.

Medical research has since proved her right, to an extent—stress and exhaustion are risk factors for a vast spectrum of diseases and illnesses—but I feel like she’s being too hard on herself once again.

What makes Emily’s journals especially compelling to me is that, as scholarly and scientific as they are, they’re also highly personal. Reading them, you get what Emily calls a “valuable index of my mind” over the course of eight years. You watch her grow up, you see how her relationships with family and friends change, you notice her writing maturing over time. Even though she was born almost 200 years before me, I find her so easy to relate to. In one 1837 entry she writes, “The commencement and conclusion of every new volume in my journal always seems a kind of era to me,” which is exactly how I feel every time I finish one diary and start another. And, like me, she uses writing itself as a kind of escape. From a young age, she loved making up stories, and often told them to the younger children in her village. As she put it at age 12:

This has been my practice ever since I was six or seven years old, and is a great amusement both to them and myself. I think I must by this time have told them many thousands of stories. They are of every kind. At one time I used to relate histories of imaginary kings of England or France; sometimes I tell stories about children, generally of noble birth; sometimes of adventures of people cast on desert islands; sometimes the adventures of some hero who encounters dragons, genii, and all sorts of enchantments; sometimes discoveries of unknown lands; sometimes the adventures of Lilliputians in England; and frequently tales in which birds or quadrupeds are the actors, in short, of every kind which can possibly be devised.

While she was keeping her journal, she was also writing novels, histories, and books of poetry. “I am aware I write too much,” she admits in her diary. But she has big ambitions: In the summer of her 17th year, she announces, “I am going to turn author. I am writing some articles for the Penny Magazine.” By the time she is 18, she has fulfilled her dream of becoming a published nature writer. The description of her seeing her writing in print for the first time brings a tear to my eye:

I seized it, but before I had opened it, Papa, also in great glee, took it into his own hands, and looked into it while I poured out the tea. My brothers and sisters, too, and even Tilla, were all watching anxiously, and I believe all were delighted to see in the title-page the words, “Account of a Young Cuckoo,” and “The Gold-Crested Wren.” My feelings were very odd at this moment; I can hardly explain them. So I am actually in print, have actually begun my career as an authoress! I say career, for I fully hope to follow it up. And I have begun it, too, at the age of seventeen, for though I am now 18, my birthday had not taken place when these little articles Were published. It seems to me very odd. Three articles of mine are now in print—those which I have mentioned, and two anecdotes, and I shall soon see some more. At night, when I went into Tilla’s room, she very coolly said, “Emily, if you ever become a very clever woman, and distinguish yourself, I shall certainly write your life, and this night shall enter into it!” “Oh, Tilla!” I said, shouting with laughter, “what a ludicrous idea! That’s taking it for granted that I am to die first!”

Sadly, of course, she did die first. The tone in the last part of her journals changes as her family moves to Madeira in search of a healthier climate. She continues to get sicker and sicker, but still has time to wonder at the newly discovered environment around her. Her last words are written in a shaky hand two weeks before her death.

Emily’s amazing thirst for life, her undefeatable curiosity, her creativity, and her ability to find wonder in our world even at desperate times continue to inspire me. It’s been about 180 years since Emily first started writing The Journal of Emily Shore, and, despite her sisters’ prediction, it’s just as revelatory and insightful and brilliant as ever. ♦

Anna Leszkiewicz lives two hours and 45 minutes, by bus, from London. Her specialist subjects are dog breeds, classic literature, and Harry Styles’s left dimple. She tweets about all this and less at @annaleszkie.