How to Rent an Apartment

Finding and moving into your own place is an expensive, exhausting, occasionally infuriating process, but it’s so, so worth it. 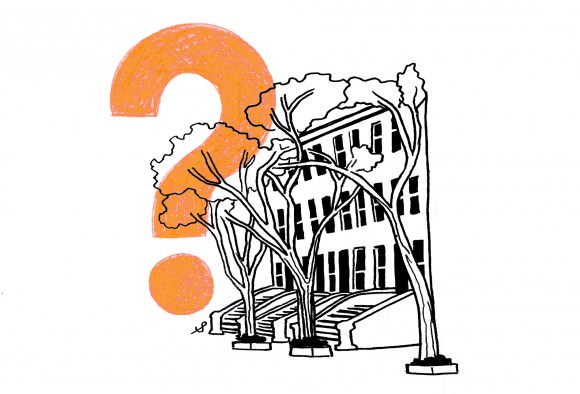 I never saw my first apartment before moving in, but I knew what I was getting into—sort of. I was out of the country, studying abroad for a semester, so I arranged the whole thing over email, putting my trust and thousands (literally!) of dollars (of my parents’ money) into the hands of three 20-year-old guys who shared both my mission—to move out of the NYU dorms and into something that represented our idea of “adulthood” (i.e., a space of our own, with no supervisors, and maybe even beer in the fridge) in the East Village, where Patti Smith and all of my other ’70s punk heroes had lived—and my total naïveté as to how hard this was gonna be.

“I think this is the best conceivable arrangement I could possibly work out for all of us,” reported my friend David, who’d taken charge of the search, when, after a few weeks of looking, they’d finally found something livable. He described one of the three bedrooms as “the smallest non-walk-in-closet room I’ve ever been in,” but kindly offered to take that one. The “big room” could fit a queen-size bed, a dresser, and a desk with space left over to walk around, and had a dreamy view of noisy, beautiful Second Avenue. That one went to Beau, the one willing to pay extra for it, which left the medium-size room—one adult-size bed, not the twin singles of our dorm rooms, would fit, but the occupant(s) would have to choose between a desk and a dresser (or scrap them both for a second bed)—to be shared by me and Chris, a hairy, affable six-foot-two dude whose sheets spent the next year balled up, unwashed, at the foot of his extra-long twin bed. This put the sheets right in my face, as one of the legs of his bed was broken, causing the whole thing to slope toward the ground, where I slept head-to-toe with him on a secondhand mattress rescued on its way to the trash from the Norman Bates type who lived across the hall with his elderly mom. It was impossible to take more than one step in any direction in that room without landing on my “bed.”

As for the rest of the place, the living room fit two disgusting, mismatched couches, one made of fake black leather and both plucked from the street. We didn’t care about the kitchen because we couldn’t cook. Spreading your arms wide in the bathroom was impossible without hitting a wall. For the pleasure, I paid $850 a month. That was in 2008.

Since then, I’ve spent that much or more to live in five different apartments of varying degrees of griminess, in all kinds of neighborhoods—green with trees, far from the subway, excessively quaint, or soul-punishingly bleak—and with some perfect roommates and some annoying ones, and a few who were actually kind of scary. I have camped out on a few floors, slept in someone’s home office for a few weeks, spent a month living with four girls whose Craigslist ad had specified “cuties only—just kidding,” and finally settled in a place that resembles a tree house: a converted attic space atop a three-story building with a sloped ceiling, a high-end-hotel-quality shower, and leaves visible in every window. Not everything has changed, though: I still sleep on that same old mattress.

I’m not complaining! Living independently has been worth all the discomfort and the inconvenience (not to mention the money). Life in your own place, without parents, siblings, or pesky college-dorm RAs around to bother you, can be everything it looks like on Friends and New Girl—a ceaseless parade of buddies and jokes and junk food and love connections. Not shown on TV: how dusty everything gets all the time, paying utility bills (water, heat, internet), and the long, arduous process of finding an apartment in the first place.

That last part comes first, and it’s the hardest—renting your first room, be it in a house or an apartment, on your own or with roommates, almost always requires a lot of patience, reasonable expectations, and serious money. The tips, tricks, and warnings below, picked up from years of practice and conversations with a few experts, will help, hopefully.

Let us begin with a word from Holly Sose, a real estate agent in New York who will be our guardian angel on this stressy spiritual journey: “Throw all of your dreams of what your apartment is going to look like into the trash,” she says. “Only once your expectations are correct can you feel like you’re not being victimized.” Deep breath. It’s going to be OK! But it’s important to know what you’re getting into.

First things first: Determine where you want to be—not just the city but the specific neighborhood(s) that appeal to you—and whom you want to live with. (Choose wisely—roommates are a whole other conversation!). And, most important, since your answer here will affect all of your other decisions, figure out what you can afford. (More on this last point in a minute.)

“You shouldn’t fall in love with just one apartment,” says Dennis Rodkin, the real estate columnist at Chicago magazine for the past 23 years. “If it’s just outside your budget or it’s not near the transit you need, even if it doesn’t seem like it, there are other places.” He also advises that ”it is always cheaper to rent with roommates than without.”

The real estate market is notoriously tough in big, populous cities: New York, Paris, San Francisco, London—all fun places to live, all soul-crushingly expensive and crowded. But it can be done! College towns, tiny villages, and mid-size metropolises can be amazing as well, and every place has its own real estate quirks, requirements, rules, and customs. You probably don’t have a choice as to where you’re gonna live, because you have to move to where school or work is. But those lucky few of you without such limitations—maybe you aren’t going to college and you’re just looking for a good town in which to start your art/comedy/culinary/music/whatever career—can check out some suggestions of the best places for young people to live here and here.

Next step: Ask around. Do you know anyone in the city you’ll be living in? Even just through Facebook? Ask them about rent prices, vacancies, and good neighborhoods for young people. The greatest housing finds often come through word-of-mouth recommendations. Google “student living [insert name of town here]” for info/advice. In the U.S., sites like PadMapper, Zillow, and Trulia allow you to search by city, neighborhood, and even specific streets, all while sorting by price, so you can figure out where to focus your search. There are similar sites in many other cities—try googling “websites for finding apartments [name of city].” Many of them allow you to sign up for email updates that tell you the latest places for rent within your area and budget. Then it’s about pouncing, but first you need to prepare.

Preparation means, first of all, that you need to get your money in order. As a young person, you’ll probably need some financial help. If you don’t have a full-time job with a salary (yet) and you’ve never lived on your own before, you will probably need something called a guarantor (sometimes referred to as a cosigner), who is an adult (usually a parent or legal guardian) willing to vouch for you financially. In NYC, for example, the industry standard is that a tenant should make, per year, at least 40 times the monthly rent—so, if the apartment costs $1,400 a month (the average for new residents here), the combined salaries of you and your roommate(s) has to be at least $56,000. Ouch, right? If you don’t meet that requirement, your guarantor has it even harder: They have to make literally twice that much to qualify. The standard in L.A. is a little more relaxed: Most landlords there want your salary (or yours + your roommates’) to be at least three times the monthly rent, according to Ellie Balderrama, a real estate agent. She works for an amazing company called the Rental Girl that helps local renters-to-be find the perfect place in any neighborhood FOR FREE (landlords pay them to fill their empty apartments or houses).

Good news: You can avoid much of this hassle by renting in farther-flung neighborhoods, so long as you can tolerate a longer commute to and from school/work. Better news: Most cities aren’t like New York, London, Hong Kong, Paris, Singapore, and other places that often show up on those “most expensive cities” lists. In smaller markets, especially ones around big schools, there are great deals to be found. Sometimes, getting an apartment can be even cheaper than living university housing, or dorms, and giant buildings hoping to attract students will even throw in perks to attract young people to their property.