There was no such thing as failure—only starting over a million times and then some. 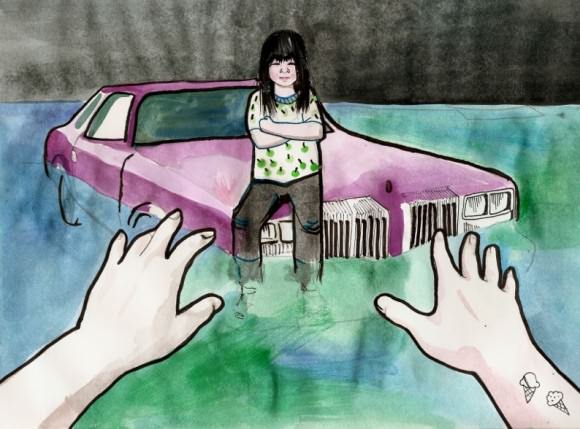 Back when my parents and I lived in Bushwick, Brooklyn, in a building sandwiched between a drug house and another drug house—the only difference being that the dealers in the one drug house were also the users and therefore more unpredictable, and in the other the dealers were never users and therefore more shrewd—our one-bedroom apartment was so subpar that we woke up with flattened cockroaches in our bedsheets, sometimes three or four stuck on our elbows. Once, I found 14 of them pressed to my calves. There was no beauty in shaking them off, though I’d like to think there was.

Back then, if one of us had to take a big dump, we had to hold it in and run across the street to use the bathroom in the gas station, which was always slippery from the neighborhood hoodlums who sprayed their pee everywhere. If more than one of us had to use the bathroom at the same time, we were in trouble—the next 10 minutes would be spent using some old toothbrush or a pair of chopsticks to mash our king-size shits into smaller chunks that our toilet could handle, because back then we were too poor and too irresponsible to afford even a toilet plunger, and though my mom and dad had put it on their list of “things we need to buy immediately or else we’ve just lost all human dignity whatsoever,” somehow at the end of every month we would be $100 short and couldn’t pay the gas bill in full, or we would owe $20 to a friend here and $10 to a friend there and so on.

There were other times when I wouldn’t be able to stop myself from asking for an ice cream with sprinkles, and my father would feel sorry for me when he realized that I had waited a whole month just to ask for an ice cream with sprinkles. It would make something inside him shake like the sapling that never became a tree outside our apartment, and that shaking would make him want to go and do something foolish like buy me a real rhinestone ankle bracelet that he knew I would adore to death and wear until one of the gems fell off.

That was the sort of rhythm my family fell into—disastrous and depressing in our inability to get ahead—and that was why we were never able to afford a toilet plunger, and that was why our butts were punished so severely in those years when it wasn’t as simple as Hey, I’m going to take a crap now, see you in 30 seconds, it was more like I’m going to take a crap now, where’s my coat and my shoes and also that shorter scarf that won’t dangle its way into the toilet, and where’s the extra toilet paper in case the Indian guy forgot to stock the bathroom again? (he always forgot). Later, when we finally moved, it still wasn’t simple either, but at least we could take shits at our own convenience, and that was nothing to forget about or diminish.

Before Bushwick, we lived in East Flatbush (my parents and I called it E-flat because we loved the sound of E-flat on the piano and we liked recasting our world in a more beautiful, melodious light) for eight months on a short little street with lots of stoops that needed fixing. We knew everyone on our street, not by name or by way of actually talking to them, but we knew their faces and we knew to nod and mouth “Hi, hi, hi,” or sometimes just “Hi-hi” or “Hi!” but always something.

Our neighbors were all people from Guyana and the West Indies. A couple of them confronted my father one evening and told him they weren’t Dominicans. “Don’t you ever call us Dominicans,” they said. My father had been carrying groceries on both arms and he didn’t think he had called them anything, but later my mom and I figured it must have been those asshole Korean kids who lived a little ways down from us and spent all of their time proving what full-blown cretins they were, standing outside their apartment wearing baseball caps with the bills unbent and their pants sagged around their knees—even though they weren’t even close to being badass enough to pull that off—and calling out whatever pitiful insult they could think of. Once, when I was walking home from the bus stop, they yelled out at me, “Yo, it’s the rape of Nanking! It’s really the rape of Nanking!” as if yelling out the name of some terrible mass rape from the shameful annals of war had the ability to scare me in 1992 when I was nine and hadn’t been scared since the day I was born, when my mother cradled me in her arms and, my father later told me, I looked like a fragile kitten and he knew he would spend the rest of his life protecting me from harm. Those Korean kids were goons who were going to end up dead or incarcerated or dead or dead or dead or dead or dead one day, and my parents and I loathed them and loathed being confused for them just because to everyone else in our neighborhood we were the same.

The Guyanese and West Indians in our neighborhood acted like their homelands had formed small, necessary, and now missing bones in their bodies that caused them ghostly aches for as long as they were alive and away from those places, and it bothered me how they clung to their pasts and acted as if bygone times were better than what was happening in the here and now. They were always having barbecues in the summer and dressing in bright colors as if our streets were lined with coconut-bearing palm trees and not trash and cigarette butts and spilt food. Eventually, though, I came to admire them and their women greatly, because they had such enormous asses that their belts dipped into a stretched-out V right at the spot where their cheeks met, and I used to follow that V with my eyes and so did the men, who apparently never got bored of seeing it either.

The men on our block were always staring at my mom—fixed, long, concentrated gazes, maybe because her ass was only one-tenth the size of their women’s asses, and her hair was so straight and long and fell down her back like heavy curtains, and she had skin so white that it reminded me of vanilla ice cream, and that was why I drew little cones all over her arms, which she let me do because my mom let me do anything as long as it made me happy.

“What makes you happy makes Mommy happy,” she always said.

Sometimes, I would forget what I was supposed to say after she said something like that, and I would say the wrong thing, like: “And what makes me happy is eating ice cream. Also, I want to tell Mrs. Heyward to go suck it. Who cares if I don’t show the work? I still got all the right answers. She’s a tool, Mom. Did you know that?”

“Sour girl,” my mom said. “If your teacher asks you to show work, then show the work. Can’t you speak anymore without using ugly words? And I take it that what makes your mommy happy doesn’t make you happy? Am I right, sours?”