The artist and actor’s favorite things are as unpredictable and wonderful as she is. 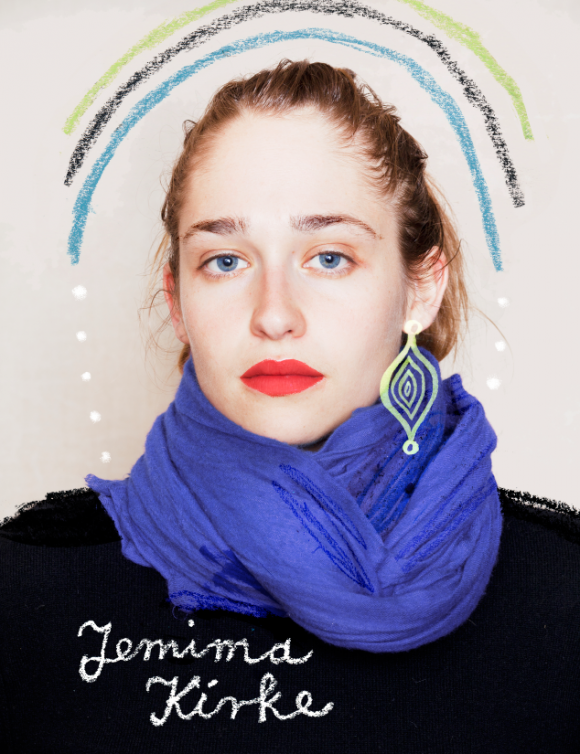 Collage by Marjainez, using a photo by Kristina Loggia.

Jemima Kirke’s performance on Girls (she plays Jessa) is so constantly funny, heartbreaking, precise, and surprising that it’s a bit alarming to learn that acting is not even her main deal. Her first love is painting—you can see some of her work here, and watch a rad video she did about sexism in the art world here.

We weren’t the least bit surprised that her High 5 list turned out to be wide-ranging, super specific, and full of surprises, too.

1. Children’s T-shirts and antiques from the 1940s–1970s. I don’t know what it is about them, but I’m obsessed with all things antique-child-related. Clothes, bedding, furniture, toys—all of it. But the T-shirts are particularly exciting to me, because the image on a T-shirt tells you a lot about what people were thinking about when it was made. Through its holes and general wear and tear, an old T-shirt also tells you about the kid who wore it. And what kid doesn’t want to wear a T-shirt? All children love wearing them because not only are they supremely comfortable, they are also an easy and instant vehicle for self-expression, emblazoned as they are with favorite sports teams, cartoons, cities, amusement parks, animals, etc. T-shirts from the ’80s and ’90s are not loaded with enough nostalgia for my taste.

2. The World of Interiors. One of the most enjoyable magazines out there. Some people mistake it for simply a decorators’ journal, but it’s so much more than that. Its mission is to take you inside living spaces/homes/buildings and to report on the creation of those spaces, their ambience, the people who made them, and the people who inhabit them. For example: a girls’ school outside London, a monastery in Italy, an old couple’s house in the hills of Cyprus, a 400-year-old stable in Spain, etc. The articles detailing the histories of different structures are the ones I like best. Each issue also has an piece on an overlooked artist from history or an underappreciated body of work by a famous artist, as well as amazing stories about nonfamous people throughout history (folk artists, housewives, teachers, etc.) with a particular craft. I save every issue and reread them constantly.

3. Recycling. I started getting diligent about recycling after I had my first child and became hyper-aware of the amount of diapers I was throwing out and the amount of stuff I was accumulating (when you’re a mom, your world is just overrun with STUFF). I also started to think bigger than just my little life and world. I thought about the state of our earth in 50 to 100 years, and that scared me. The phrase “live gently” suddenly made so much sense to me. Do your part. Keep your side of the street clean and leave this world as close to how it was when you came in as you possibly can. Today, I am religious about recycling: composting, cloth diapers (I now use compostable diapers from Diaperkind), not using plastic bags, refusing plastic utensils and napkins when I order take out. I also take short showers and use electricity only when I need it. It’s hard and I’m not perfect at it, but I rest assured that I do the most I can.

4. Shark Tank (Fridays, 9 PM, ABC). This show rules! Aspiring businessmen and inventors appear before a panel of business moguls (the sharks) and present their ideas in the hopes of talking their way to an investment or a partnership. The inventions are sometimes hilariously clueless, and I love hearing how the inventors came up with their ideas. Other times, the ideas are really genius, and those are exciting, but you soon learn that selling a good idea is more complex than just throwing money at it. The “sharks” look at all the numbers, the potential sales, the business models. I’m not business-minded, so it’s a fun way to learn. It’s also fun to watch people who live and breathe MONEY. All the investors are super smart and intimidating, and I love when they bring their dick-head attitudes to the fore and totally tear someone a new asshole. Here’s my rundown on the “sharks”: Mark Cuban is sexy, Mr. Wonderful is the biggest asshole on the planet and I love him, Barbara Corcoran manages to be a nice lady while also being critical and discerning (in short, she’s a badass bitch), Daymond John is cool as fuck and has a big heart, and it seems that Robert Herjavec doesn’t really want to strike a deal with anyone.

5. Pierre Bonnard (1867–1947). I wish I had the balls to play with color the way Pierre Bonnard did, or at least the insight to see those colors in daily life. The shortness and the busy-ness of his brushstrokes in some of his later paintings makes the image fall apart into a party of wild colors. Then you step back and the image comes back together. Not like pointillism—Bonnard’s technique is, to me, much more accurate and honest. But what fascinates me the most are his angles. Weird and voyeuristic, they feel very first-person. Like you just walked into the room, and this is what you found. To me, Bonnard is like existentialism without the angst. Looking at his paintings, you feel the beauty he sees and the respect he has for even—especially—the most mundane things. ♦