Have you seen the documentary The September Issue? It came out in 2009 and was about the making of American Vogue’s biggest issue of the year. If you haven’t, I recommend it. Anyway, there’s this one scene where Grace Coddington, the magazine’s creative director, kneels down to tie a model’s shoe. She jokingly mentions how no stylist kneels at anyone’s feet anymore, they all have assistants, and that’s true. I love this moment, because it shows how much this woman cares about every damn detail that goes into the making of an image. There’s another scene where she’s in Paris and she looks out a car window and says, “Always keep your eyes open…keep watching, because whatever you see out the window, or wherever, can inspire you.” She has seen this view a million times before, but she will not let its magic go away. The fashion industry can leave many people feeling jaded, but I get the feeling that Grace will never be one of them.

Grace Coddington’s job is basically to pick the clothes that will appear in Vogue, and to decide how to use them in the photo shoots, or “editorials,” which are basically the most important parts of any fashion magazine. Her spreads can tell a million stories with a simple cock of the hip or a twist of a collar, whether models are jumping in front of a white background or lounging in lush locations. With every picture, she seems to be saying, “We’re never gonna survive unless we get a little crazy,” and her intricate fantasy worlds have always provided me a beautiful escape from everyday reality.

While everyone familiar with Vogue has heard of the editor-in-chief, Anna Wintour, it’s Grace’s creativity that drives the Vogue aesthetic year after year. Her visions of romanticism and humor are embedded into the magazine’s DNA at this point. In Grace’s hands, even the most basic of fashion-magazine ideas, like “the top trends of the season,” can become enduring ideals of taste and creativity.

At its best, fashion can inspire you to think about the way you see yourself in the world in new and revelatory ways. Grace Coddington’s work has done exactly that for me since the first time I saw it. It was January 1995, and I was casually flipping through my mom’s copy of Vogue, when I saw this: 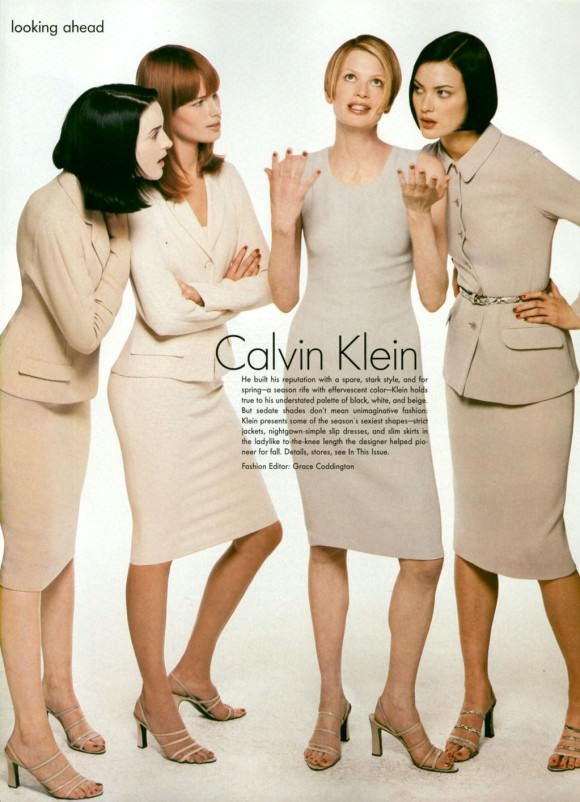 Photo by Stephen Meisel for Vogue, via The Fashion Spot.

I imagined that these four perfectly dressed women were discussing something work related–a business proposition or an impossible boss. Each one was impeccably done up: Their hair fell just so, and their manicures and pedicures matched. I find power in such precision. In my head, they were businesswomen who are in control. I asked to myself, Which one would I be? I decided I was Shalom Harlow, standing at the far right, because she makes listening a dramatic act, and because I liked her snakeskin belt and sandals.

A few pages later, I saw five women packed into the frame like sardines: 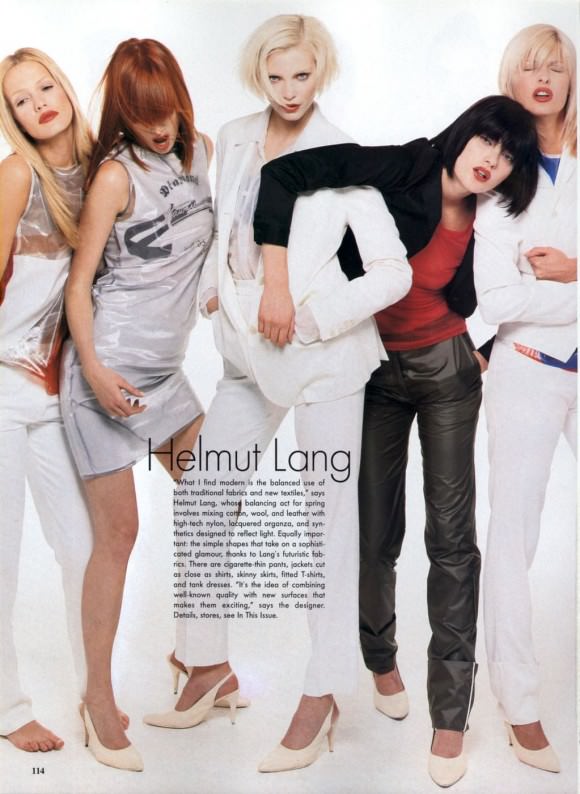 Stephen Meisel for Vogue, via The Fashion Spot.

I imagined they were trying to get to the front row of a concert. I’d never even seen track pants look so good! One of was wearing hot pants and a jacket, but it somehow felt logical. Their hair was pin-straight in that rock & roll sort of way that Avril Lavigne would borrow years later. I could tell by their poses and the way their hair blew around (they were quite possibly banging their heads) that they did not give a fuck. I decided I would be the one in the black track pants (Shalom again). This became my lifelong template for what “cool” looks like.

I continued on, and the women were now wearing ’40s-inspired clothes, their hair in victory rolls and bouffants: 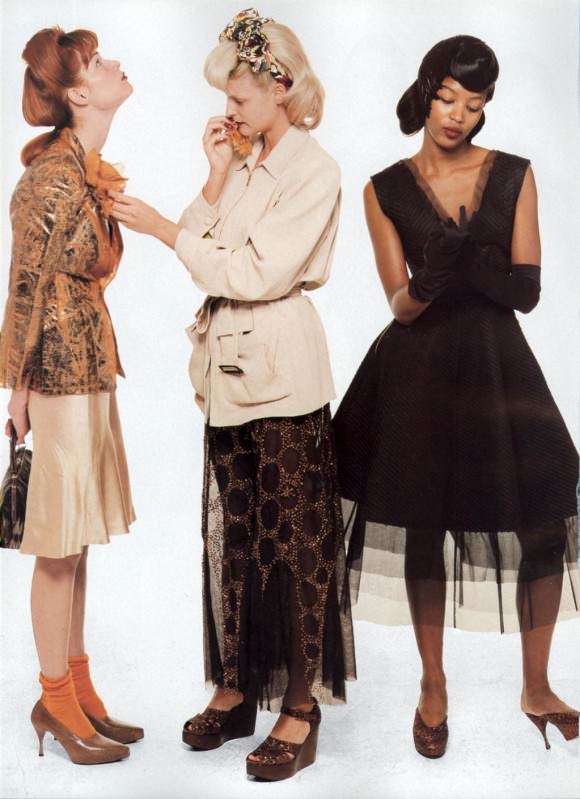 Stephen Meisel for Vogue, via The Fashion Spot.

It seemed like this time they were getting ready to go to a party—one was pinning a giant fabric flower onto the lapel of another’s jacket, while a third adjusted her gloves. Their hemlines may have been demure, and they may have been wearing petticoats under their party dresses, but they were clearly no wallflowers. This is the photo that taught me that wearing pink isn’t the only way to be girly. I decided that I would be the one pinning the flower on the other one: I’ve never met an over-the-top accessory I didn’t like.

These photos were all part of a Grace Coddington–styled editorial called “Looking Ahead: The Collections That Count,” and its premise could not have been more boring: to show some pieces from a few key collections by designers that advertise in Vogue, I mean that Vogue likes. But look at what Grace did with that! I kept flipping back and forth through those pages, incredulous that these models could look so different each time they appeared, and wondering, Could I look this different each day, too? Although, technically, I couldn’t—I wore a uniform to school every day for the next six years—the images instilled a sense of sartorial fearlessness in me that would come to fruition a few years later on, when I became obsessed with Gwen Stefani and thought nothing of wearing cut-off tank tops with massively wide pants or a pair of silver sneaker flatworms with space-themed stickers on the sole like it was no big deal. Through Grace, I have granted myself permission to just go for it whenever I feel like it—but if I want to go barefoot and stare at the camera, you know, that’s OK, too.

Maybe it’s because Grace grew up in remote island off the coast of Wales, reading Vogue magazine and dreaming of far-off places that her work is so imbued with the feeling of escape. So many fashion-magazine editorials are about SEX or being SHOCKING, but Grace prefers to make allusions to art, literature, and theater. In this shoot from the December 2003 issue, Natalia Vodianova plays Alice of Alice in Wonderland: 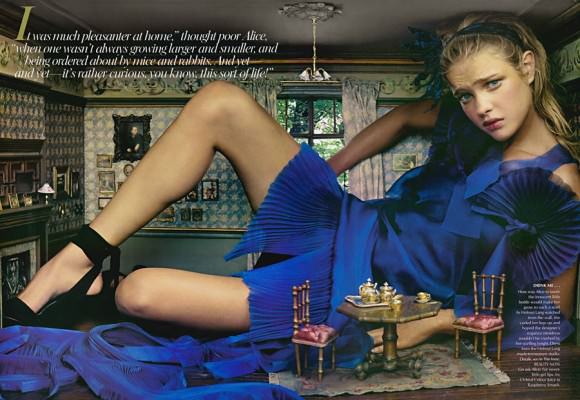 Photo by Annie Leibovitz for Vogue, via Blogspot.

Like Alice, she has changed size and become suddenly overgrown in a pleated cobalt blue dress that matches her eyes. She looks at us with an expression that mixes fear and sadness, as if she’s imploring us, “How do I get out of here?”

In an editorial from December 1998 inspired by the carol “The 12 Days of Christmas,” Shalom Harlow and six male dancers represented the song’s “seven swans a-swimming”: 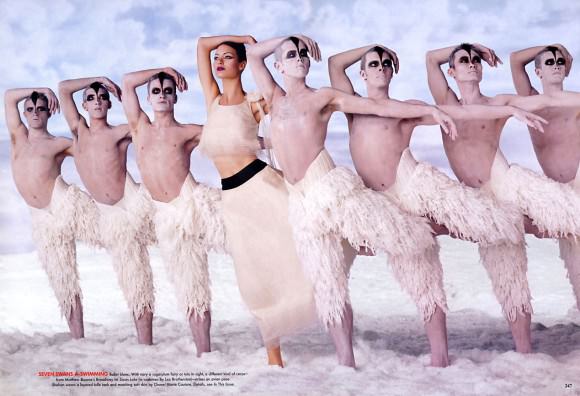 Photo by Stephen Meisel for Vogue, via LiveJournal.

She’s wearing a deconstructed reconfiguration of Odette’s costume from Swan Lake, her arms elegantly curved over her head like wings, and it’s as close to a Christmas gift as a corporation could ever give you. 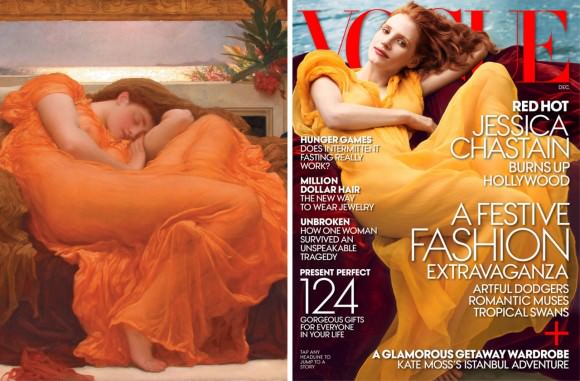 Most recently, in a spread from this past December, the actress Jessica Chastain became the subject of Sir Frederic Leighton’s Flaming June, one of my favorite paintings. The painting, which resides at one of the art museums in Puerto Rico, where I grew up, has always felt a bit like a secret of mine—it’s one of the only paintings that I’ve been able to visit again and again throughout the years. I was surprised to see it on the cover of Vogue, but then thought, Of course Grace would know about a painting of a redheaded muse. 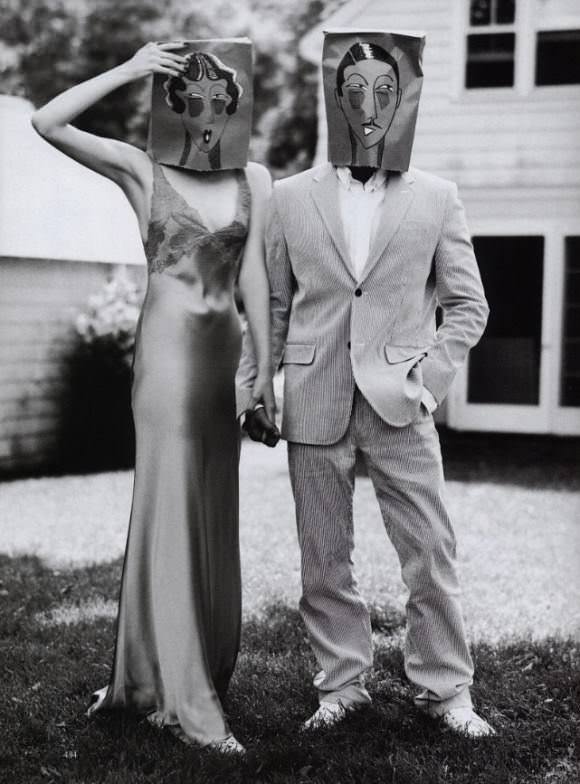 Photo for Vogue via The Fashion Spot.

Grace’s fantasies aren’t always so fantastical or otherworldly, but they are always inspiring, and they always reflect her cheeky sense of humor: In a shoot about the hoity-toity 1920s Hamptons, two of the models will be wearing paper bags as masks; an editorial set on gritty NYC streets will star a motorcycle gang of models in ball gowns.

Although a bit of whimsy is good every now and then, I am more drawn to her work that involves dressing a gang of women in more commonplace situations, whether they’re hanging out near a lake in white makeup, or wearing delicate eyelet dresses in front of a wall of chairs. She makes the unaccessible accessible, and vice versa. True, I won’t be painting my whole face white anytime soon, but I sure as hell have piled on white eyeshadow inspired by this shoot before heading out to a party. The most important lesson to take away from Grace’s work is that fashion should be fun and that it should bring something to your life. There’s no point in the most expensive bag or shoe if it doesn’t invoke a fantasy when you look at or hold it. The idea of fashion-as-fantasy is kind of like putting on a cape in order to become a superhero. Grace Coddington always takes me on a trip to the farthest-away-possible realms, with the most exciting of possibilities. When I come back to earth, I can turn those experiences into something that works for me.

Even now, almost 20 years later after I came across my first Grace Coddington editorial, I keep referring back to its images and charting my progress against them. Last winter, I purchased a gold leather skirt because it reminded me of the cool girls at the concert from that story. When I googled the original image for this piece and studied it again, I immediately emailed it to a friend, saying, “This is all I want to be.” I think her work endures because they are all fantasies rooted in reality. You get the sense that she is acutely aware of how lucky she is to be able to create these magical worlds for a living, and she passes on that wonderment through her images. For not only demonstrating the kind of career I hope to have someday, but for also helping me explore my own self-image as a woman, Grace Coddington has 100% hero status in my life. ♦