The Devil in Me

Everyone I have ever hated has met an early grave.

How to Do a Perfect Space Punk Face 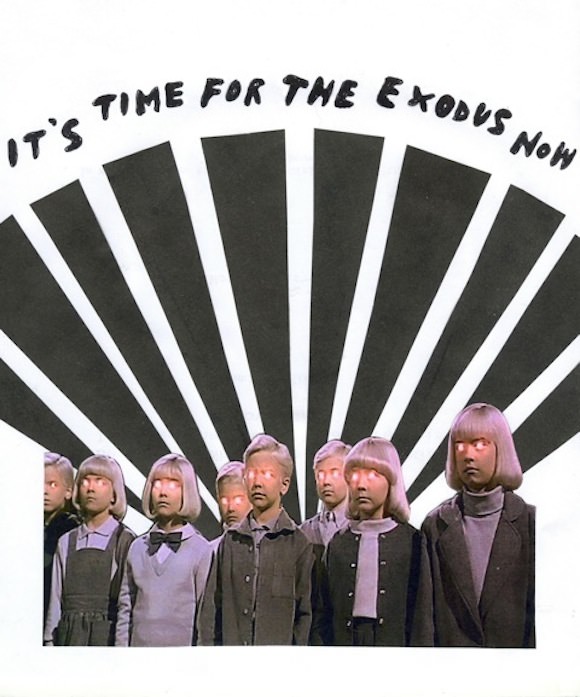 Collage by Camille, using a still from “Village of the Damined,” 1960.

Well, the first one I did on purpose. There were others before him, including his mother, but she was an accident. That was before I got a handle on my powers. Then I learned to focus: I wished that something bad would happen to him, and he died.

He was a teacher at my school. My parents forced me to take private tutoring sessions with him, and I quickly grew to hate him and everything he stood for—particularly the way he talked to students from affluent families, which was so different from the disdain with which he treated me. Within a week of my starting those lessons, his apparently hale and hearty mother dropped dead. It seemed odd at first, but I tried not to think about it. But when he died a year later, I knew that it was my fault. After all, I was the one who for months had been thinking, I wish he would just die! The cause and effect was too obvious to ignore.

A few years later, I killed my own mother. “Strained” would probably be the kindest way to describe the relationship I had with her, but “openly hostile” is more accurate. For years, I had dreamed of killing her. She hanged herself while I was locked in a psych ward, battling the demons she had unleashed on me. Her suicide was attributed to alcoholism and depression, but I knew the real cause.

Death dogs my footsteps. Anyone I take a virulent dislike to dies—usually suddenly, unexpectedly. Every time I find myself hating someone, I wonder if they will meet an early grave. My antipathy is a violent, annihilating force that I have little control over.

Like many victims of child abuse, I developed an overactive imagination early in life. Visions of the future were a life preserver that guided me over the treacherous waters of my childhood. But around the time I hit puberty, I started to feel like my visions had an odd capacity to bend reality—my own and those of the people around me. I wished unhappiness on exes, I doomed burgeoning relationships and cursed people with years of loneliness, only to see these things happen in real life.

I have bipolar disorder and borderline personality disorder. The former manifests itself, more often than not, as depression; misery is a prominent feature of my mental landscape. I have my good days, but sadness is never far away. It’s hard for me to dream about happiness; it’s easy for me to predict dark futures for myself and almost everyone else. I conjure up violent fantasies, I picture myself being murdered, and once these dark visions start, I am powerless to stop them. I’m terrified that by imagining these things, I am bringing them to pass. Happy thoughts, on the other hand, are fleeting. No sooner does one enter my brain than it is chased out by thoughts of gruesome acts of violence, crippling poverty, unrelenting loneliness.

I know that none of this makes sense. I know I am being irrational. Of course I can’t actually will futures into existence—it’s a scientific impossibility. Nothing is predetermined in this life, and I have no mysterious powers. Death befalls everyone—just because it happens to sometimes coincide with a thought in my brain doesn’t mean I can actually cause it by thinking about it. I think my fixation on these incidents is a way for me to punish myself for surviving while my abusive mother didn’t, for ending relationships, and just for hating people. When you’re told repeatedly for the first 17 years of your life that you should never have been born, you tend to develop a guilt complex, you know? You feel guilt for just existing, and you feel like everything is your fault. Everything bad, I mean.

But even though I know there’s no way what I feel is real, I can’t stop feeling it. I continue to feel responsible for the deaths of everyone I’ve ever hated. I try to live my life morally; I choose to be guided by goodwill and kindness. But I can never actually see myself as a moral person, because of the guilt I walk around with. I know I’m not actually a killer, but I feel like one.

Most of us go through life with the vaguest notion of who we really are, what we really are. Complete self-knowledge is almost impossible to achieve. It’s even harder when you’re afflicted with anxiety. I can’t see myself clearly because my vision is clouded by fear. And those fears have been around so long—my whole life—that they’re a lot stronger than my rational thoughts, who are newcomers around these parts. So, over and over, I succumb to the histrionics of my mind, which twist every thought and action into dark melodrama. In my imagination, I become a tragic heroine, the victim of a curse—that’s the identity I crafted for myself as a child. Imagining that I could kill my enemies with just a random thought was a way to feel like I had some power in the world, when in fact I had none. It lent some dignity to my suffering and made me feel stronger on days when I barely felt human. It didn’t have the warm glow of hope, but the steely resilience of malice drove me forward. The question is, what do you do with a superpower when you don’t need it anymore?

Three years ago, I rejected the only man who had ever been good to me in favor of a more-familiar-feeling relationship—which, unsurprisingly, soon failed. I dove headlong into my usual self-recriminations and eventually drowned in a sea of regret. I fixated on the bad choice I’d made, wishing I could have a second chance, which I knew would never come because I didn’t deserve it.

Then, a few months ago, I got an email. Just three or four lines from the guy I’d turned down, saying he’d found himself randomly thinking about me and wanted to know how I was doing.

Did I bring this about by wishing for it? Probably not. But it threw into question my image of myself as an angel of death and a bringer-about of nothing but misery. For once, I hadn’t dealt out death, I’d created something tender and hopeful instead. I was a seer, a martyr, a doomed soul, but now the Furies have dispersed to the underworld, and I’m no longer on trial. I can feel myself changing.

It’s hard to let go of the thought patterns that have sustained you for most of your life, even when they’re bad for you. My old ways of thinking are like a pair of boots I’ve broken in by shredding my feet to ribbons. I slipped them on unthinkingly for years, because that’s what I was used to. Then one day I realized they no longer fit.

When I was a little girl, I was taught that my life would be one of uninterrupted pain—and that I deserved it. That was the first prophecy that was aimed at me, and I made it come true by believing it. Then I made up several of my own predictions and believed that I made them come true, too. My “superpower” was a coping mechanism to get me through years of abuse. It was useful back then, but I’ve long outgrown it. Now that the cycle of violence is over, I’ve found new powers, much more potent ones: sympathy, compassion, love. Real love. (Remember that guy who sent the email? We’ve been dating. It’s going good so far.) ♦