“Full focus” meant more to me than just being able to see. 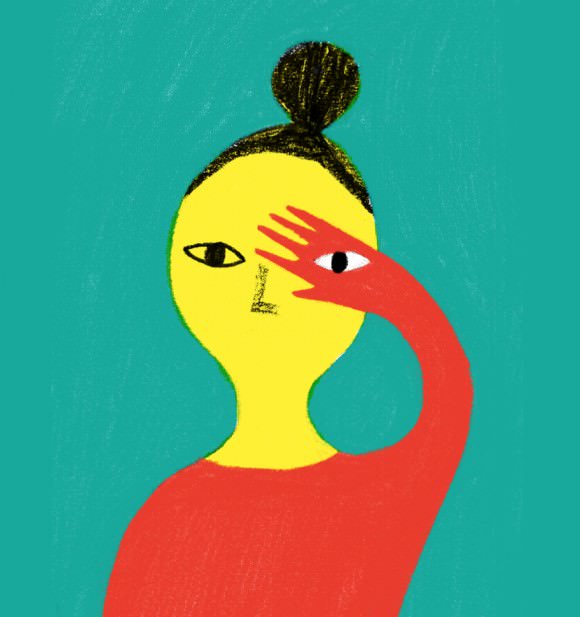 You’ve probably heard someone say that eyes are the “windows to the soul.” I’ve never taken that adage too seriously. I’m what doctors call monocular, which means that only one of my eyes has 100 percent functionality. When I was three years old, my right eye was diagnosed with an underdeveloped optic nerve and poor muscle movement and was declared legally blind. None of this, in my case, is curable. Even today, my left eye sees perfectly, but my right one can make out only shapes, color, and brightness, and has a blind spot on one side. That eye has been breaking my heart open ever since my family was told that it was “abnormal.”

After my diagnosis, doctors and prescriptions dominated my life. My parents, determined to find a cure, ran me through hand-eye coordination exercises and researched miracle surgeries in Russia. I found all this fuss about my eyesight deeply disorienting, since I had never been bothered about it before I was told there was something “wrong” with it. But after that, I couldn’t shake the feeling that my monocularity meant that there was something wrong with me. I felt incomplete, defective. I yearned to live in “full focus,” though I couldn’t imagine what that would be like.

My anxieties intensified when I started school, and people started asking me about my eye, which crosses slightly (especially when it’s tired). My stomach would twist and turn when other kids commented on my “cross-eyes” and the very fashionable accessories that I had been prescribed for them, like the eye patches I was supposed to wear at all times to strengthen my sight—one in black that made me look like some sort of child pirate, and one ghastly “nude” version that resembled a Band-Aid and clashed with my darker skin—and a much-hated pair of thick-rimmed bubblegum-pink glasses. It was not a cute look, a fact I didn’t need to be reminded about by my classmates.

I was supported and cared for at home, but my overachieving family feared laziness more than bullying—the main instruction they gave me about my eyes was not to use them as an excuse not to excel. If I was going to have only one eye that worked, I remember my mom telling me, I had better use that eye to do exceptional things, and to make sure it and I looked fabulous doing them (this may have contributed to my hatred of those glasses). It’s like what Olivia Pope’s father says to her on my favorite show, Scandal: “You have to be twice as good as them to get half of what they have” if you’re a black woman—or, in my case, a black woman with a disability—who wants to be successful in a world that isn’t always receptive to you.

As soon as I started school, I pushed myself constantly to work extra-hard at everything I did, even when it was time to rest or ask for help. I studied for inhuman hours and still received less-than-stellar grades in geometry instead of confessing that it took me longer than most people to read math problems, and I regarded every mistake or average mark as a sign of defeat. When I did well at my work, well-meaning family members or teachers often made comments like “Wow, look at all you’ve done with [insert whatever academic achievement here]. Just imagine what you could do with two perfect eyes,” not knowing I was tormented by that very idea—that I was missing something that I was convinced would make me stronger, faster, and more efficient.

As I grew up, I raged at anything that my vision was supposed to keep me from doing. Throughout middle and high school, I tempted fate and played tennis, field hockey, and other sports involving flying objects coming at my face. I felt a dark pride about not wearing my protective lenses while my opponents were literally charging towards my blind spot, which went against the advice of every one of my doctors about protecting my good eye. They warned that an accidental athletic injury could cause me to completely lose my sight, which terrified me, but my fear of not being able to do what everyone else could was even greater.

I rarely wore my everyday glasses, which to me were big, ugly reminders of my inferiority to other people, but despite my best efforts, I couldn’t ignore my monocularity into nonexistence. I felt incapacitating shame whenever I bumped into a wall I didn’t see, walked into a stranger on the street, or missed a detail on an assignment because I was too embarrassed to admit that I couldn’t see the blackboard. I couldn’t tell the difference between acknowledging the reality of my experience and “not trying hard enough.”

My years of denial came at a high cost. In college, I would respond with clipped matter-of-factness when a new roommate would curiously ask me why my eye would get lazy before bed, and would only ever address my disability when I was forced to appeal for extra time on tests. After graduating, I continued to downplay the issue as best I could. Then finally, a few years ago, after absorbing decades of stress, my body waged a full mutiny: All at once I was overcome with physical fatigue, a hormonal breakdown, gastrointestinal distress, and all-over numbness. Scariest of all, the vision in my “good” eye began to diminish. I was forced to take a break. Not that it was easy: It was humbling and terrifying to be late with deadlines or to bail on meetups with friends for the first time in my life. Plus, I had also killed my ability to simply BE by DOING way too much for way too long.

This was the wakeup call I needed to finally go see a doctor, after dodging visits whenever possible for almost 30 years. The first one I saw confirmed everything I disliked about those visits: Among other tremendously dickish moves, he said that someone with my condition didn’t deserve the extra time on standardized tests that I need to do well. Apparently, giving someone like me extra privileges just because I only have one functional eye isn’t fair to people with “REAL learning disabilities,” as he put it. My heart smarted from making myself so vulnerable just to have my insecurities thrown in my face. It made me feel exactly as I had in high school, when I overworked myself in order to be “perfect” without realizing I was eating away at the life force I needed to see my ambitions through.

I eventually found a doctor who treated me with humanity and kindness, but more than that, I finally found it in myself to come to terms with my disability. I learned how to make peace with my eyes, and all the parts of me, the way they are through a spiritual circle called REDLADIES, which I joined in 2011. There, I discovered that my shame about my eye wasn’t really about my physical appearance—it came more from feeling like I wasn’t “whole.” The realization came one day during meditation. We were asked to recall the last time we felt fully “embodied,” or united with our physical selves. I pictured myself as a bright-eyed, smiling, snaggle-toothed child with a wild sandy-colored afro, glasses, tap shoes, skinny elbows. I reflected on that child’s beauty and I thought about the dreams she had for me—none of them had anything to do with overcompensating for anything missing. She was whole, and who was I to call her deficient? All of the clarity I ever wanted suddenly came to me: I needed to love who I was, eyes included, before I could move forward. One of the other REDLADIES described a similar experience as “coming home to” her body, and that is exactly how it felt for me—I came to understand that my eyesight had given me the ability to see the world in a very special and beautiful way.

Since I’ve always walked around with at least one eye “closed,” I pick up on noises, smells, and tactile sensations very strongly. I’ve had to really use that awareness and intuition to navigate the world around me, rather than relying on what I see. I think this partially explains why I’ve become a very spiritual person, which has been a huge gift in my life. If I had been born with two fully functioning eyes, who knows if I’d feel so connected and present most of the time? For all the limitations it has imposed on my vision, my monocularity has heightened the development of my other senses and my awareness of that which is unseen for as far back as I can remember.

When I was born, my great-grandma told my parents that I had “hungry eyes”—the same kind of sparkly peepers she saw in babies destined to become quick, smart, and self-possessed adults. She told everyone to get ready, because I was going to be a firecracker. She looked at my eyes and saw my soul.

Today, I know that she was right. Regardless of my visual limitations—and in many cases because of them—I can see my life, and the world I’m a part of, more clearly than ever. ♦