It’s as real as you believe it is. 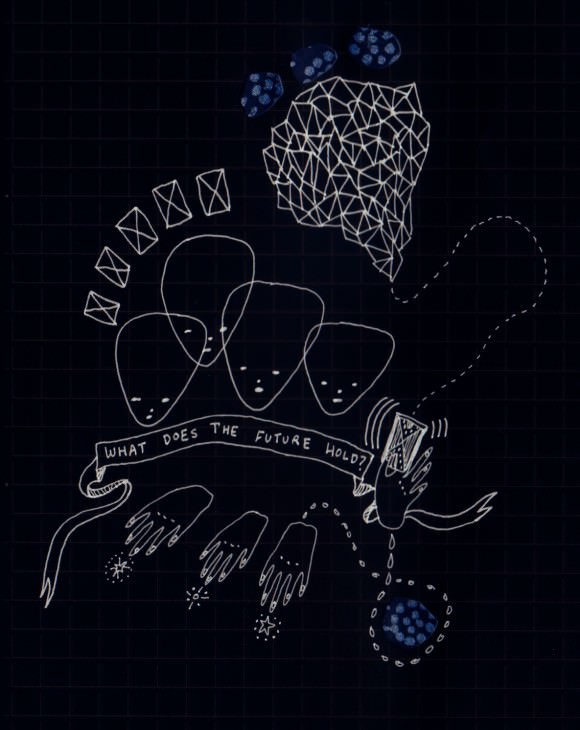 A year and a half ago, I visited a few different psychics and tarot readers to see what they would say about my future, and wrote about it for Rookie. I didn’t mention this in the article, but part of my motivation when I pitched it was that I was prepping myself for a big change across all categories of my life: work, love, where I lived. I’d been stagnant for way too long; I felt stuck. But as much as I hate keeping anything from you guys, I couldn’t talk about all that on the internet at the time, because I hadn’t quit my job yet, and I didn’t want them to learn my plans prematurely. (Also because I’m a little bit superstitious.)

I’d spent the preceding eight years working as an office assistant at a petroleum company, a fact that always seemed to shock people—I think because I was a style blogger by night, and sometimes when they know that, people assume you’re living the glamorous life like Sheila E. And maybe that’s true for some bloggers, but in real life we needs to make dat scrilla, and behind many a sequined curtain lies a not-so-flashy day job. My job paid the bills, and I wasn’t miserable there—just constantly teetering between fairly bummed out and complacent, which wasn’t fun in any case, so I was thirsty for a legit transition. I was ready to shake everything up. I was dying to find out if I’d ever actually do it, and, if so, would I regret it? Hence the psychic readings!

If you read that piece from June 2012, you might be wondering if any of the things the psychics told me ever came to pass. Well, yes, a lot of them did: Almost all of the psychics told me I would get a new job in the fall, which happened. One of them, “the Germanic Madame,” told me (through the medium Vikramadithya Ikshvivek) that I would change residences in October, and I totally did. She also predicted that I would soon write captions for some pictures in a print anthology—some captions I was actually working on at the time (though I hadn’t mentioned them to her) were published three months later in Rookie Yearbook One.

But an equal number of their predictions didn’t come true. Like, I never had to choose between romance with a jock and a goth (though I do date some dark, goth-y dudes but that’s just my type, OH-KAY!) and I never met a divorcé named Tom at a 5K (THANK GAWD because I hate running). I mention this not to discredit any of the readings I got, but as an example of how I approach tarot and psychic readings in general.

I believe that psychic powers are real, because I have personally experienced them. (As I mentioned in that first piece, I had two very specific and eerie psychic dreams as a youngster.) But I never take everything a psychic or tarot reader or astrologer or ANYONE tells me as the complete and total answer. I think of such readings not so much as blueprints, with super specific directions, measurements, and plans, but more as maps: They give you a lay of the land but don’t tell you which roads you will choose to take or exactly what will happen to you while you’re there. I then use them as motivators and guides to help me get to where I want to be. If a psychic told you that some outcome you’d been really wanting would come to pass, would you go home and just sit there waiting or it to fall into your lap like a bag of Doritos your friend threw at you from across the room? I wouldn’t be happy just sitting around waiting for them Doritos—I’d want to help ensure that this prediction came true. I spoke with Louise Androlia, a London-based tarot reader, life coach, and healer, about all this, and she told me:

Nothing is set in stone. I could tell you absolutely anything right now, and if you then go and choose to sit in your bedroom for six months, nothing would happen to you. I believe tarot and psychic readings should be empowering. They should remind us that we are in the driver’s seat, and that we absolutely must participate in our own lives. If you go [to a psychic] wanting to “know your future,” that’s kind of forgetting about the awesome thing that is YOU, and how you are in charge of navigating this life experience yourself.

All action, on some level, begins with intention. Psychic readings help me focus on my intentions. But then I have to put those intentions into action. And that is how the magick really happens.

I know that all of this could be described as just self-fulfilling prophecy, but if it works, why the fuck not? I tend to think of it, though, in terms of energy. I believe in the law of attraction, which holds that “like attracts like,” meaning, in this context, good energy attracts more good energy, and bad energy attracts bad. Positive thoughts attract good stuff, but if you’re all like, “My day is shit!” then guess what? More than likely, your day is going to be complete shit, because you already subconsciously planned it!

The law of attraction lies at the heart of the Secret, which is where I first heard about it, back when that movie, and then that book, came out. I was curious about where all the ideas in The Secret (both version) came from, so I started googling around, and that’s how I learned about Esther Hicks, an author and inspiration speaker who has been writing and talking about the law of attraction since the late ’80s. She didn’t make it up, either—a guy named William Walker Atkinson mentioned it in his 1906 classic Thought Vibration or the Law of Attraction in the Thought World.

I started learning about this stuff shortly after a ~spooky~ incident in which I was thinking angry thoughts about some friends I was pissed off at, and then immediately crashed my car into a parked one on my way to get a cheeseburger. I figured I must be REALLY good at negative-thought manifestation, so why not try the opposite? Well, I quickly learned that the old cliché saying “Think positive!” is real, my boo. Once I started to live a more positive-thinking life, everything got better. Obviously, you’re going to have your bad days and that’s a bonafide truth, but having this trip at the ready can help you get back on the right path when you feel lost.

I believe that your thoughts have a profound effect on your future. I think it’s important to harness your thoughts, wishes, hopes, and dreams, and boil them down into a super-concentrated compound called intention. Then comes the fun part, where you get to put your intentions into action: “Work hard, be nice, research, explore, email people, network, write, make the steps you need,” says Louise. “That might be applying to colleges, jobs, joining a group to meet new people, starting an exercise class, anything. It’s you participating, it’s you getting up and going, ‘OK I’m going to live my life and not wait for it.'” When I have a question about something in my life and go to a psychic for advice, I come out feeling motivated and ready to take on the world. And if I had happen to get a not-so-great reading, I just remind myself: This is just a map. It is up to me what route I take. You have the power to avoid potentially bad situations if you see them coming.

There are a few things that can help you stay on the path of making magick happen. My friend Aaron, who is also like my spiritual advisor, has been helping me a lot with keeping my intentions in focus and at the forefront. One thing he taught me to do is to keep a vision book. If you’ve heard of vision boards, this is the same idea. You draw or glue in pictures that represent how you want to live your life, and/or write out what you want. In high school, I taped a picture of myself wearing the furry black Delia’s coat that I wanted on my wall. Little did I know then, that was my first foray into successful vision-boarding! I made another one last year, and almost everything on it came true: I moved to exactly where I wanted to go, found a cute apartment in a safe neighborhood with hardwood floors (I got SPECIFIC), and fell in love. There were only two things on it that didn’t happen last year, and I’m concentrating on them for 2014.

If you’re too lazy to cut things out or get your hands sticky with glue, try making a vision board on Pinterest. Just make sure you look at it EVERY DAY! Remember, everything you want is ultimately up to you to make happen. You are the master of your destiny. Embrace your power! You really can make things happen for yourself, you magickal creature, you. ♦