Super Heroine: An Interview With Lorde

In which we talk about songwriting, Tumblr, Taylor, Beyoncé, Kanye, Raymond Carver, haircare, clothes, insecurity, crying on planes, and…pretty much everything. 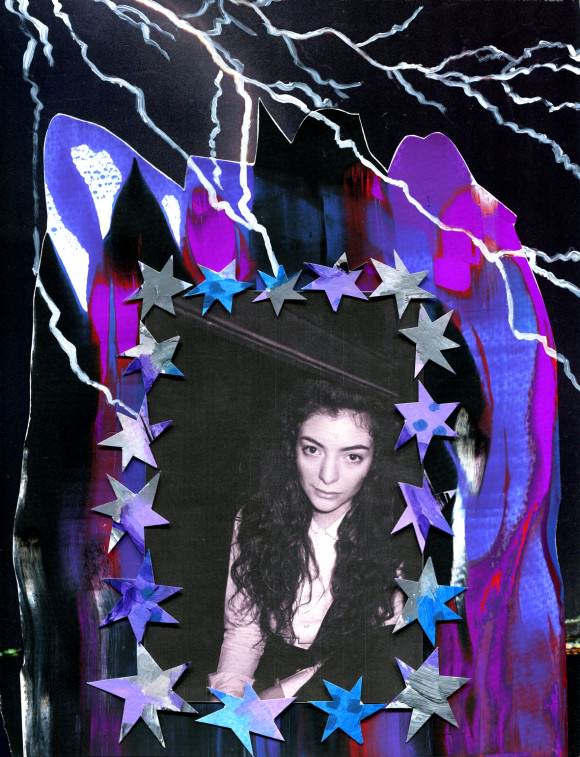 Photo by Petra. Collage by Minna.

Although she had no music out at this time last year, by now Lorde requires no introduction. Seventeen years old, from New Zealand, with a richly hushed voice that she lays over minimal beats—you’ve heard all this. You’ve probably also heard her portrayed as some kind of alpha-Daria. According to one YouTube commenter (I SWEAR I WASN’T READING YOUTUBE COMMENTS, THIS ONE WAS ALREADY AT THE TOP OF THE PAGE), “She’s like that awkward-ass girl in the back of your class lol.” According to many of the writers who have profiled her, she’s the patron saint of Weird Girls Everywhere.

What these people don’t realize is that her reach goes far beyond a very hip sect on Tumblr. In fact, Lorde’s song “Royals” was #1 on the radio for nine weeks straight. Her debut album, Pure Heroine, got her four Grammy nominations. She is not niche. She is huge. But despite the commercial and critical success of her music, and the fact that she was signed to Universal at the age of 13, Lorde is continually portrayed as an underdog. Adult journalists tend to see only “edgy”-looking outsiders in the backs of classrooms identifying with her music, and totally miss the fact that hordes of snapchatting normies understand her, too, and vice versa. This is not only because they tend to underestimate Lorde’s ability to appeal to the masses. They also underestimate the capacity of “normal” teenagers to appreciate thoughtful, unflashy music.

Sure, Lorde dresses like a witch and drips with sarcasm in interviews. Her best-known song denounces the materialism that other artists show off, and other ones say things like, “I’ll let you in on something big: I’m not a white-teeth teen.” But they also declare, “I’m little, but I’m coming for the crown. I’m little, but I’m coming for the title held by everyone who’s up.” And “We’re bigger than we ever dreamed, and I’m in love with being queen.” And “I’m doing this for the thrill of it, killing it, never not chasing the million things I want. And I am only as young as the minute is, full of it, getting pumped up on the little bright things I bought.” Do not for one second mistake her stoicism for self-deprecation, or think it’s only goth girls who relate.

The album is a delightful cluster of such contradictions: Lorde is content with the world she’s created for herself but eager to make waves in the one outside. Bored by the suburbs but endlessly in love with them. Critical of the other songs on the radio but wondering if she’s any better (follow up a listen to “Royals” with “Still Sane”: “Only bad people live to see their likeness set in stone—what does that make me?”).

It’s also insanely beautiful. A thorough listen feels like driving with shadows shifting across your face, quiet and thoughtful, in a car full of rowdier friends. Lorde elevates her suburban experiences to the level of mythology, becoming an empress surrounded by hounds, marking underpasses as her territory. She fixates on blood and veins as well as on the simple wonder of connecting with someone and wanting to experience everything with them. You can tell by the sound of her haunting voice that she means every word, and that she knows she’s on the edge of erupting, as if to say: I’ve been taking notes and keeping secrets, and I want to share them with you now.

I met Ella (her given name) in October, after we’d both discovered via online interviews and social media that we shared a mutual admiration (she’s a Rookie!), so this interview got pretty conversational, but I liked that we could talk to each other as peers. We gave it a try on the night we met, but we were on a noisy restaurant rooftop and my recorder wasn’t working. (I was also nervous about meeting her and embarrassed when she called me out for humming “Royals” under my breath subconsciously.) (She was nice about it.) (It is a really catchy song.) She was generous enough to agree to a do-over last month, and we talked for over two hours on Skype. She addressed, among other things, the pervasive line that journalists dole out about her: “While I dress and talk somewhat differently from other people whose songs are in the Top 40, I feel like more people dress like me than the media makes out.” Instead of letting a few random sartorial choices narrow our expectations of music and music listeners, let us appreciate what Lorde’s popularity says about all sorts of people, which is the only way to describe her demographic. And let us see what she has to say for herself, right here.

TAVI: How does it feel to be home right now?

LORDE: It feels really good. I’m definitely not on holiday yet—I’ve been writing outlines for what I want to happen onstage for the tour and the next music video and this, like, big TV performance I’ve got coming up. It’s not work, per se, but—yeah, work.

I’m curious, because I love what I do, but it is also a job, and everyone at times doesn’t like their job. What do you do when it starts to feel too much like work?

Often I’m able to work on my own timeline—I’ll give myself enough time that if I don’t feel like doing something, I can wait and do it a few days later or whatever.

That’s good. I want to start out by saying that what I want to do with this is…I’m in a unique position in interviewing you because we’re the same age–

Oh my god, that tweet you made where you were like, “She laces her Converse…” I was like, “This is so accurate!” There’s a definite viewpoint of the think piece by an adult writing about kids.

"She giggles, lacing her Chuck Taylors. She may be famous, but she's still just a kid." -end of every profile of a well-known young person

It’s true! The end is always like, “She does [this childlike thing] but she also does [this adultlike thing]. Whoa!”

Mine is “She squeals…”

Yeah! That’s what I’d just read when I wrote that! Or, no, it was a profile of Saoirse Ronan where they were like, “Then she’s just a kid in her Keds…”

So I just want this to be, like…a lot of our readers really relate to you, and I want this to be for them. Not music-journalism-y or about “the pop music landscape.”