Why I’m sick of articles about teenage girls written by grown-up men. 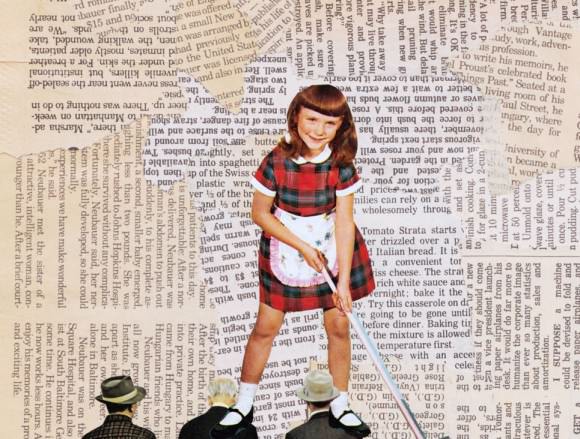 This comment, in one form or another, often gets directed at us on Twitter, especially on Friday nights, right after we post our weekly playlists. It’s also something I hear a lot in real life when I tell people—especially grown men—who I write for. “Wow!” they’ll say. “Good work, ladies!” Their surprise might be based on our staff’s working knowledge of punk rock history (yes, we know who the Wipers are) or on the fact that Rookie’s articles are actually thoughtful and well written, but it’s always condescending and insulting, and never itself much of a surprise.

I know I’m coming dangerously close to generalizing about ALL men in the exact same way I’m complaining that SOME men generalize about young women. There are, of course, many male critics who celebrate teen-girl fandom and our voices as cultural consumers and analysts and don’t roll their eyes when we gush about 1D or whatever. Thank you for that, dudes. But because men have more power across the board than women in our culture, they get the message, from birth, that their opinions about things are the Most Important Opinions. Whether they choose to believe this is up to them, but rejecting it is a lot harder than sitting back and enjoying it.

So I can hardly blame the many, many adult males who seem to have this cute assumption that all girls are dying for their approval of our cultural tastes, though we never actually asked for it. And I guess it’s kind of understandable that they might assume we have shitty taste—but I still don’t totally understand their need to vocally criticize us for liking the things we like. When Tavi posted a link to an excerpt of her Taylor Swift piece for The Believer, a highly detailed and laborious work of pure love for Swift’s music, a male cartoonist called her out for liking what sounded to him like “the soundtrack to getting a froyo and then stopping at Target for a new pair of Crocs.” Not that she asked him!

When I wrote a long piece for Buzzfeed about discovering Animal Collective and falling in love with them as a 12-year-old girl, dudes in the comments section made fun of my musical taste! Apparently my enthusiasm and knowledge meant nothing, because this band’s music wasn’t on the sacred list of Music Men Approve Of. And that’s just one example in a long history of criticisms lobbed against me and my apparent TEEN TASTES! Once, I was talking to an older male friend about the brilliance of Mean Girls, and he kept dismissing it as an airheaded comedy “for teens.” Obviously, he hadn’t seen it, because I think we all know that Mean Girls is a classic for people of any age. It wasn’t until I told him that the movie was written by Tina Fey that he seemed willing to reconsider his first reaction. Because 30 Rock is cool, but young women are NOT.

When you applaud or critique a young girl’s taste based on how well or badly it aligns with yours, you are suggesting that your taste = THE RIGHT TASTE, because you are the one IN THE KNOW. I sometimes rate movies on the website Mubi, and I can’t count the number of times an older male cinephile has urged me to rewatch a film I’ve given a low score to, because obviously I “didn’t understand it” the first time around. “How do you even know about this?” they sometimes ask. “You weren’t even born when this movie came out.” Dude: I have the internet.

This kind of cultural superiority complex extends to the makers of culture as well. For evidence, look at almost any piece written by a grown man about a young female artist. Here’s one: When Jody Rosen wrote about T. Swift for New York magazine, rather than ask this funny, smart, world-famous young pop star anything interesting about her work or her views on the world, he pitted her G-rated pop against Beyoncé’s and Rihanna’s more risqué work and let us know that Swift has never “writhed across a stage wearing a negligee, or less.” Rosen found Swift “witty,” “despite her public persona.” Because, what, cute girls can’t be funny? He marveled at the mostly female crowd at her concert for a full paragraph, but was careful to point out that there were “creepy dudes from Oklahoma” among the screaming young females, to illustrate…what? That Swift is so versatile that she appeals to both (a) females and (b) male creeps? The whole piece came across as the work of someone deeply out of their element. I mean, he described the male gaze as an “old feminist bugbear.” Why is this the person who was assigned to the Taylor Swift story?

Following the U.S. premiere of Chris Lilley’s television show Ja’mie: Private School Girl, which has Lilley playing a highly exaggerated mean-girl archetype, several think pieces popped up to criticize not the show itself (even though there was plenty to legitimately criticize, as a few smart writers did), but rather…the sorry state of REAL YOUNG WOMEN in the world. In one such article on The Atlantic’s website, Jake Flanagin took a look at a work of over-the-top campy fiction and posed, in all apparent sincerity, this question (about real people!): “Why are young women turning into monsters?” I repeat: monsters. Ooh, scary! I’m sure we’re a big threat to straight white men who write for magazines like The Atlantic, what with all our dangerous selfies and Snapchats and sexts. Flanagin went on to wonder whether the average viewer was smart enough to tell that the show is satire: “Presumably, Lilley poses this array of amusing insecurities and prejudices as a critical device, not face-value comedy,” he sniffed. “But it’s difficult to say whether the audience can discern the difference.”

As a member of that audience and a teenage girl (aka future monster), I’d like to ease his fears, at least on that last point: Teenage girls know that Ja’mie: Private School Girl is satire; it’s by Chris Lilley, for god’s sake. Have you ever met a teenage girl, Jake? We don’t act like Ja’mie. Just like how you, a guy in his 20s, don’t act like Van Wilder. Or so I assume (insert a thousand winks here).

I know I have a vested interest in this whole thing because I’m an aspiring cultural critic and a current young woman, but I think I speak for all girls and women between the ages of 13 and 19 when I say that grown-up male journalists are probably not the best choice to assign stories about teen-girl culture to (keeping in mind those aforementioned exceptions). What they come up with, too much of the time, is a lot of off-base and frankly clueless speculation about what girls think, what we do, what we want, and what we need.

It’s not these dudes’ fault that they believe they know everything. They were raised that way. But they really don’t know much about us at all. Here’s a tip for them: Next time you’re musing as to what girls are all about, try to shut up and listen. ♦