A living reminder of why I fell in love with fashion in the first place. 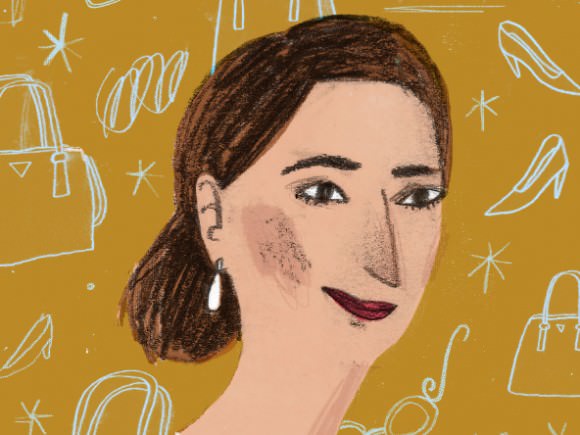 I was about 10 years old when I became hooked on my mom’s fashion magazines. It was the mid-’90s, when fashion had not become so completely ruled by marketing and advertising money. It was a little more fun. It was one of those magazines—the January 1996 issue of American Vogue, to be specific—that set the tone for my sartorial choices for the rest of my life (no, really).

In an editorial highlighting the best looks from that year’s spring collections, this picture jumped right off the page and lodged itself into my consciousness forever. 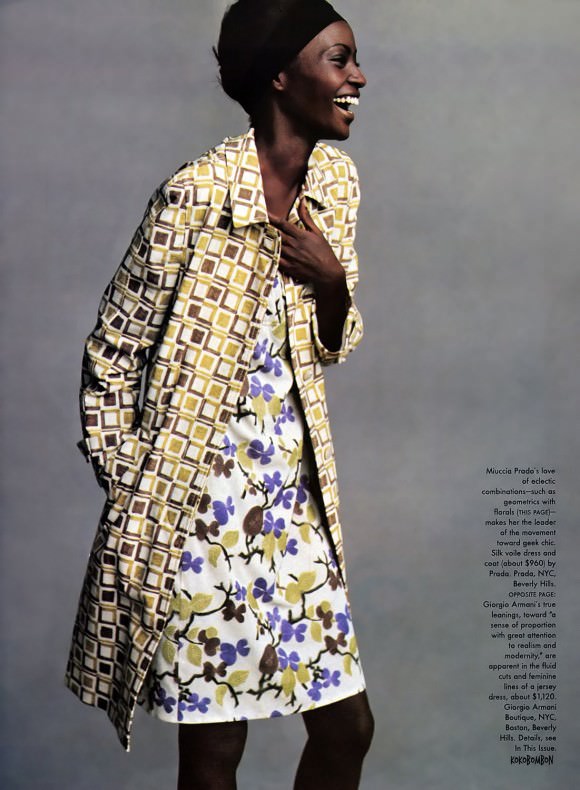 Photo by Steven Meisel for Vogue.

I was mesmerized by Oluchi Onweagba’s weirdo outfit: a long green-and-brown printed jacket worn with that vine-printed dress. How could these two things that didn’t match look so good together? Could I be just as happy as she looks in here if I wore unmatching clothes? This photo became my gateway drug to a full-on obsession with the woman who designed that outfit: Miuccia Prada, the genius behind the labels Prada and Miu Miu.

It wasn’t long before I was searching for Prada ads in every magazine, and ripping them out as soon as I found them. The company’s campaigns from that era always seemed to tell a story. The models weren’t just sitting there, looking pretty—they were going somewhere. They had purpose. They were in control.

This image of Amber Valletta sitting in a boat in an almost sheer white dress immediately pops into my brain. She’s staring at the viewer, but the look of determination in her eyes has always suggested to me that she is going somewhere—somewhere important. 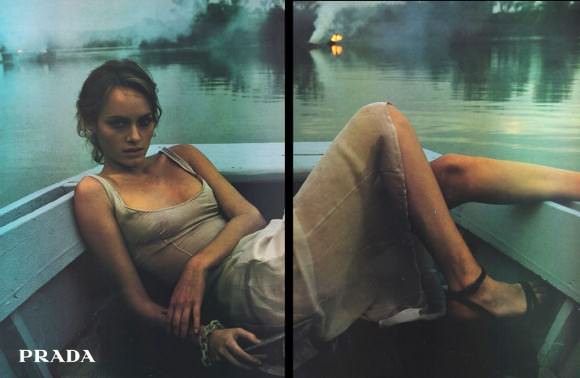 Another season found Amber wearing a pink skirt with a slit up to there, sitting down but on full alert, like she’s about to run out and start some serious shit with someone. 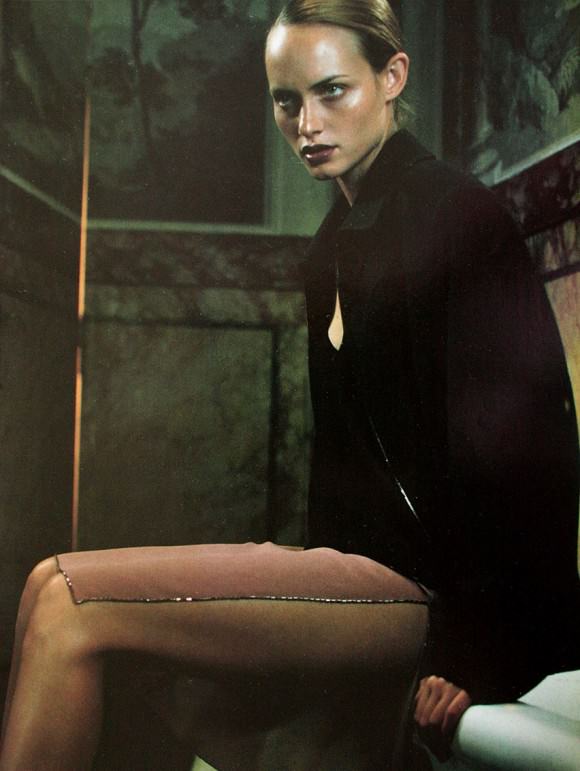 You could sense the power of the women in Prada’s ads even when it was just their feet in the picture, as in this one for the spring 1998 collection: 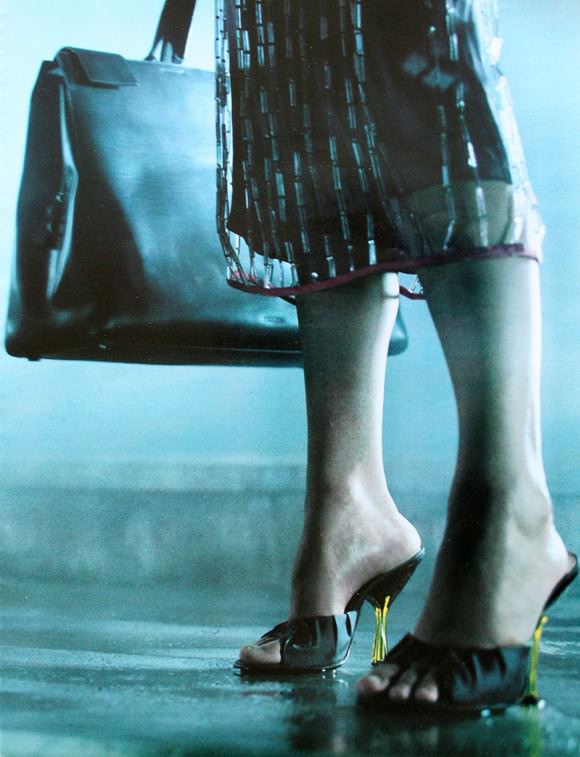 Photo by Glen Luchford for Prada.

That wide stance, the leather overnight bag, the wet cement—this picture tells me that something has happened, and this woman (Amber again–she was clearly a favorite) has escaped. Maybe she is a detective, maybe she is running away from her life and starting over. Am I looking into these pictures too much? Maybe, but regardless of intent, those were the thoughts ’n’ feelings they stirred in me. Just always women getting shit done.

The debate over whether fashion is or isn’t art is an old one, and we are not really going to get into it here, but when it does come up, even the naysayers tend to concede that there’s art in the work of some designers—like Alexander McQueen and Jean-Paul Gaultier, who make dream gowns and turn women into historical characters one season and mythical beings the next. Miuccia’s name is rarely on that list, simply because she designs for women as we are, as we live. The women who wear her clothes—on runways, in advertisements, and in real life—are neither prudish nor super-sexual; they are grown-ass women with a real sense of who they are and what their bodies do. (Though I concede that the overwhelming whiteness of the model lineup in most fashion shows, including Prada’s, limits that example considerably.)

For fall 2008, she designed her lace collection, setting loose an army of women wearing black, blue, and tan lace with cotton poplin (the material used for most men’s button-down shirts). There was a slightly monastic air to the shape of the clothes that contrasted starkly with their sheerness—the lace wasn’t backed or lined with anything, so you could see right through to the underlayers (which, on the runway and in the magazines, were button-down shirts and big, full-coverage underwear). 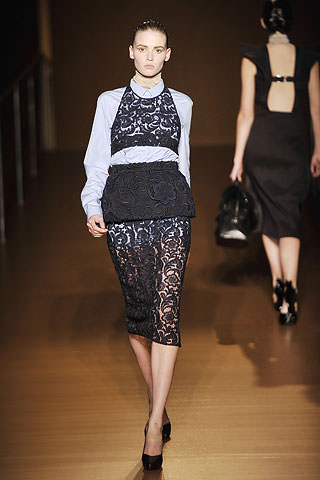 This look was thoroughly modern, even though it referenced a bit of ’90s minimalism and a bit of the 1940s’ postwar silhouettes. This is one of Miuccia’s superpowers: She takes shapes, materials, and ideas from the past and mixes them with the most timely of references, turning them into clothes that strike a chord within us and resonate deeply there. You take one look and feel like, Oh, of course—this is the only thing I could possibly want to wear right now. And although I may never be able to buy any of her clothes, Miuccia’s vision allows me to look at the things I wear and the things I want to say about myself in new ways.

The women in her fall 2013 show were more overtly sexual than usual, all wet hair and incredibly engineered bodices that did a perfect imitation of clothes falling off at the shoulder. These dresses were reminiscent of the slim pencil skirts of the 1950s; they also mixed business-appropriate with fantasy-metallic. Once again, Miuccia turned something from the past into something totally modern, desirable, perfect. 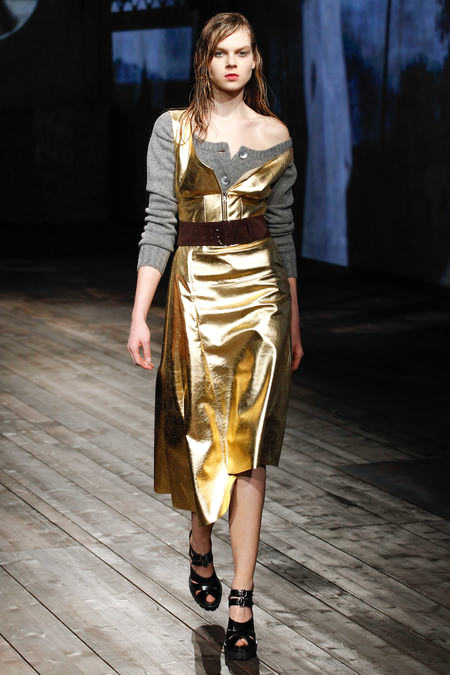 Before embarking on a fashion career, Miuccia Prada got a PhD in political science and studied to become a mime at the Piccolo Teatro in Milan. She is a committed socialist as well as a feminist who actively fought for women’s rights during the 1970s, all of which made her an unlikely candidate to take over her grandfather’s leather goods company in 1978. In an interview with the New York Times last year, she said, “When I started, fashion was the worst place to be if you were a leftist feminist. It was horrid. I had a prejudice, yes, I always had a problem with it. I suppose I felt guilty not to be doing something more important, more political.”

Soon after taking control of the family business—known for its leather bags, remember—Miuccia came out with a simple black nylon backpack, made of the same material that the military used for their parachutes in the early 20th century. Taking this seemingly cheap fabric and turning it into THE luxury item of the 1980s and ’90s established her as the visionary she has continued to be—someone with little regard for politesse and lots of respect for the unexpected.

Today, Miuccia Prada is the force behind a whole empire (and in front of it and around all the sides, if we’re gonna get real, which we are). Her work has been recognized far outside of fashion, and her clothes are often displayed alone, as objets d’art. In 2005, she created Waist Down, a traveling exhibition of 200 Prada skirts–her favorite articles of clothing, as they are at once feminine, comfortable, and practical. A couple years later, the Metropolitan Museum of Art put on a show called Schiaparelli and Prada: Impossible Conversations, which placed Miuccia’s work side by side with that of Elsa Schiaparelli, the Italian surrealist designer known for her 1930s lobster-printed dresses and her gloves with painted-on fingernails. Looking at Miuccia’s work in this context, it was strikingly apparent that it has always been more subversive than it has generally gotten credit for. By mixing new and old, good taste and bad taste, she has always mocked the idea that fashion is about being pretty, and that women’s main role in life is to look pretty for others.

I’ve always been in love with fashion, and I currently work as a fashion stylist, but as I’ve gotten older, I’ve seen the dark side of the industry—primarily the racism and the sexism. Then there’s the elitist nature of the whole enterprise—I mean, can you really justify spending $500 on a T-shirt, “as an investment”? (You can’t.) Sometimes it’s just exhausting, you know? And sometimes I wish I had pursued a more noble profession, something that brings good to humanity. But every season, when I get to log on to the Prada website and watch the live-stream of the latest show, I remember why I love fashion, what makes it special.

Some people make clothes and some people make fashion, and then there’s Miuccia, who manages to sell you a dream and a dress at the same time. The only opinion she seems to care about is her own—everyone else can be into futuristic helmets and glow-in-the-dark bodysuits, and she will show you the simplest slip dress that will make the most sense out of everything in the world. I love her because she always she knows exactly what (a lot of) women want, and what we will want next. She sees my ideal version of myself—not idealized, just want I want to project—before I do, and she knows exactly how to dress her, which is just the coolest trick. ♦