Her paintings give me the strength to be less shy about my own art. 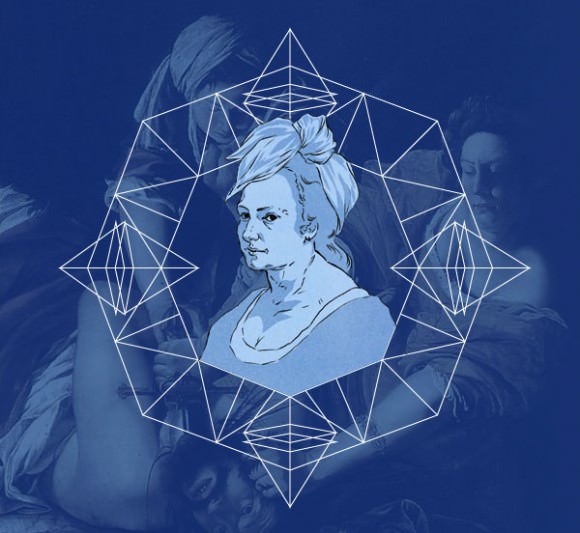 I recently learned about Artemisia Gentileschi, a 17th-century Italian painter, in an art history course. I was instantly mesmerized by her work: She had a remarkable understanding of light, anatomy, and gesture, she was able to infuse her paintings with real drama, and when it came to her compositions, she routinely killed it. Coming across her work was like, How have I never heard of this amazing artist before?!

Unfortunately, while Artemisia was well known and highly regarded in her own time, today she doesn’t have the same level of recognition as some of her male contemporaries, like the famous Baroque painters Rembrandt and Rubens. After she died, scholars actually attributed some of Artemisia’s work to her father and to other male painters, until feminist artists in the 1970s and ’80s rediscovered her work. This sucks, to put it succinctly, and not just because she has a gorgeous name that should be remembered for all of time (and, if they ever do a gender-swap version of the Ninja Turtles, who all bear the names of famous male painters, assigned to one of those mutant sewer-dwellers), but because she was a woman who defied the social limitations placed upon her, becoming a prominent artist despite not having access to the same apprenticeships and training that male artists had. The quality of Artemisia’s work is what I love and respond to most about her, but her lived experiences elevate that love to total Hero Status. The more I study her, the more impressed I am by her talent, bravery, and insight. I aspire to be a professional artist someday soon, and though our styles are different, I’d say that I’m a student of Artemisia’s—the purposeful way she approached her subjects and lived her life is galvanizing for a timid person like me. For example:

1. She imbued the female characters that she painted with an authentic sense of emotion. 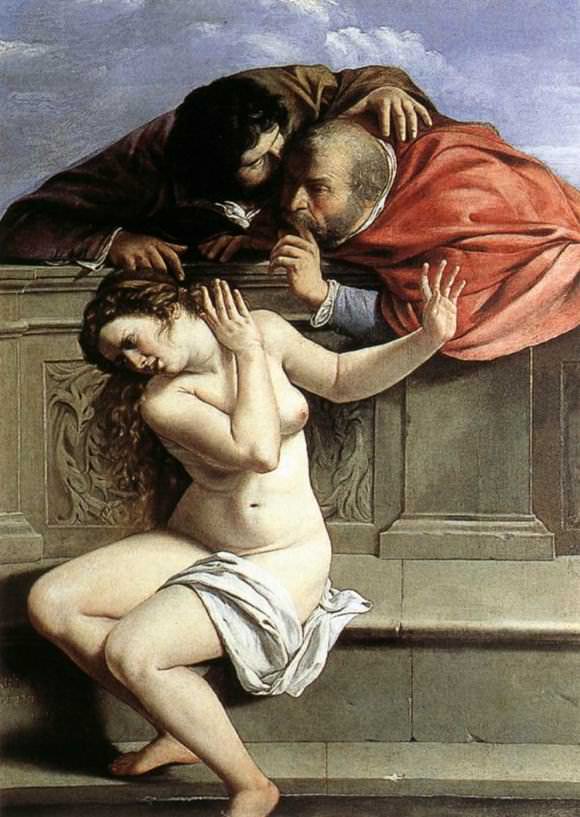 Susanna and the Elders, 1610, Artemisia Gentileschi.

In the biblical story of Susanna and the Elders, two lecherous peeping toms observe a young woman, Susanna, bathing in her garden. They threaten to tell people that they saw her having sex with a man (she totally wasn’t) unless she agrees to do it with them. Male painters who tackled this story usually focused on Susanna’s sensual appearance, which, ugh, typical, but in Artemisia’s Susanna and the Elders, which she painted when she was 17, the young female character’s vulnerability and powerlessness in the face of what would have surely been a harrowing experience are emphasized instead. Susanna’s pose is defensive and her brow is furrowed—she’s obviously distressed. When I look at the scene, my skin crawls. I don’t merely see these two men gawking at Susannah; I sympathize with the effect that their actions have on her, and more broadly, the effect of sexual objectification from a woman’s perspective. Her ability to make me, a woman living centuries later, feel linked to her and her experiences, is what I consider the mark of an amazing artist.

There’s a boldness, energy, and complexity to Artemisia’s work that I think is cool, if a little stomach-churning in its gore. In Artemisia’s most famous painting, Judith Slaying Holofernes (which I’m just linking to here because it is blooo-DY), the subject is, once again, biblical. As the story goes, Judith charmed an invading general named Holofernes, smooth-talked her way into his tent, got him drunk, and then decapitated him with the help of her maidservant. European art was overwhelmingly religious in theme during this time, and the story of Judith and Holofernes was a common subject in Renaissance and Baroque art. Usually, Judith was depicted in the immediate aftermath of the beheading—generally looking rather demure and sort of just chilling with homeboy’s severed head, you know, as one does after casually decapitating someone.

Artemisia’s version, however, is right in the middle of the action, and I’m sure, hard for some people to stomach. The blade of Judith’s dagger cutting through Holofernes’s awkwardly turned neck, the blood stains on the white sheet that he’s lying on—it’s gruesome. While I’ve never decapitated anyone (and hope I’ll never have to—fingers crossed), this scene strikes me as profoundly realistic. The details succeed in conveying Holofernes’s struggle, Judith’s apparent difficulty getting the blade through his neck, and the heroine’s exposed cleavage (because, c’mon, you can’t be expected to also keep your bosom in check when you’re cutting some dude’s head off) and giving the scene an intensity and immediacy that isn’t found in many other Judith paintings. While I can appreciate that not every artist aims for this kind of ultra-realism, I’m awed by the audacity of Artemisia’s version. Through her work, she challenges tradition, challenges the viewer with the grisly bloodshed and the image of a woman dominating a man, and, since the handful of other female painters in the 17th century were mostly doing portraits and still lifes, challenges ideas about the sorts of subjects that were considered appropriate for women to paint. SHE IS ALL UP IN YOUR FACE WITH THIS, and it’s awesome.

3. She painted a portrait of herself as the allegory of painting to show everyone who was boss. 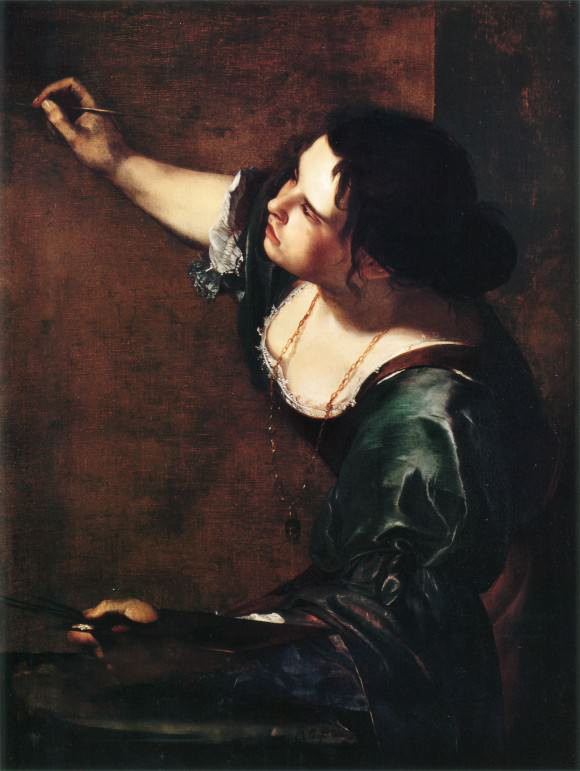 Self-Portrait as the Allegory of Painting, c. 1638, Artemisia Gentileschi.

Im what is generally believed to be a self-portrait, Artemisia represents herself as the physical manifestation of painting’s essence. She holds a palette in her left hand, a paintbrush in her right, and approaches her canvas in a strikingly balletic way. When I look at this painting, I see how important painting was to her identity—she and her art form were one and the same. I suppose it could seem egotistical to portray yourself in this way, but sometimes just saying, “I’m an artist” is the gutsiest thing that you can do as someone who makes creative work, because the statement often comes with so much judgment, both internal and external. Almost every art teacher I’ve had has told me that I’m hesitant—I make little sketchy marks instead of assertive lines and when I’m using pencil, or I’ll draw so lightly that you can barely see what I’ve done. One teacher even had me do all of my assignments in pen as a way of forcing me to be decisive. Apparently, I’m not just afraid to call myself an artist, I’m afraid to be one.

I’m a writer and I also draw. I want to do both of those things professionally, but these obviously aren’t the most practical careers. Even if I show some talent in either field, my future is uncertain. Sometimes I get anxious and start thinking that just because you’re amazing at what you do doesn’t mean you’re going to be successful. For creative folks, there’s so much pressure and often an obligation to put our dreams on the back burner as we pursue more financially stable livelihoods—I used to work at a video store during the day and wrote short stories all night and into the morning. And, let me tell you, it’s really difficult to follow your bliss when you’re exhausted as hell.

In this painting, Artemisia doesn’t appear to share my uncertainties, or, if she does, she’s definitely not showing it. Instead of denying that she makes art, as I’m tempted to do on occasion, she paints herself as the very personification of it, seemingly undaunted by the work of all the great masters that have come before her, even though she was a relative newbie at that point. Artemisia’s confidence inspires me to be more comfortable identifying myself by what I create—like, if she can say she IS PAINTING ITSELF, I can definitely start calling myself an artist.

4. She was a woman of great strength and conviction, plus also a hustla.

Though later in her life she received commissions by the influential Medici family and King Charles I of England and palled around with Galileo, what would turn out to be an extremely successful career began with violence and infamy. Artemisia’s father, Orazio, was her first art teacher, but he eventually arranged for her to study with Agostino Tassi, a painter friend of his. Tassi raped his young pupil (she was only 18 years old at the time). After assaulting Artemisia, he promised to marry her. She accepted his “proposal”—likely to avoid social ruin for no longer being a virgin—but then Tassi backed out of the engagement.

When Orazio found out about all of this, he pressed charges against his daughter’s attacker. During the trial, Artemisia had to prove that she was a virgin before Tassi raped her (otherwise, under the law at the time, the assault wouldn’t qualify as rape!), so she was given a crude, sadistic, and obviously useless proto–“lie detector” text, where you’re supposed to stick to your story while having your hands tortured. On top of this, she was subjected to numerous gynecological examinations by midwives. Though Tassi was convicted, Artemisia’s reputation never fully recovered from this scandal (several degrading poems questioning her morals were written about her after she died). Despite this awful ordeal, she continued painting, and her work became so sought-after that she was able to have a robust career despite the unfair stigma.

I don’t think it’s my (or anyone’s) place to speculate about exactly how Artemisia’s sexual assault and the ensuing trial impacted the way she approached her subjects. But one thing that is clear is that they didn’t quash her ambition. I’m fortunate to have never had to face the outrageous pain and hardship that Artemisia did, but I do struggle in my own way—we all do. I think that’s why we need to remember people like her. She was a self-possessed woman who imagined herself as the personification of painting, who painted her first masterpiece at the age of 17, and who some believe was still accepting commissions up until the year she died. She was also a hustla—throughout her life, she traveled across Italy, looking for new patrons. Even when confronted with devastating obstacles, Artemisia was deeply devoted to her craft, and that’s heroic to me. ♦