A musical premiere with a side order of real-time sisterly dynamics. 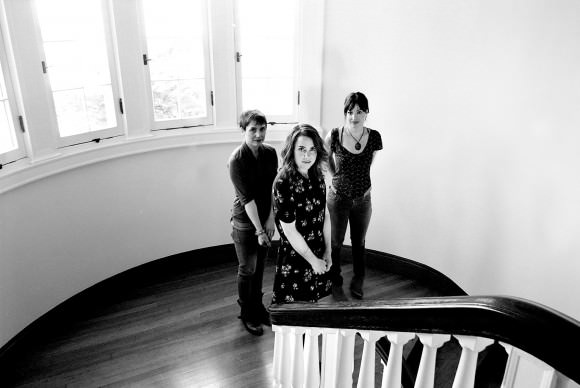 From 1991 to 1997, Petra and Rachel Haden were best known as members of the Los Angeles power-pop quartet That Dog. But the two had been singing for years before that, along with their sister Tanya. The family’s music roots are deep: In the 1930s, their paternal grandparents hosted a country radio show called The Haden Family Radio Show, on which their father, the jazz musician Charlie Haden, appeared as a child. On trips to visit their father’s relatives in Missouri, the triplets would learn songs by the Carter Family and the Louvin Brothers and other old country acts, and the whole clan would sing them together while sitting around in the living room.

The Haden Triplets recently recorded a collection of some of those old songs. Their self-titled album comes out on February 4 on Jack White’s Third Man Records. Here’s the first single, the sisters’ take on the Carter Family’s “Single Girl, Married Girl,” from 1928.

When I called the Haden Triplets a few weeks ago, we chatted about keeping family singing traditions alive, the unique dynamic of triplet collaborations, and some pretty exciting news about the future of That Dog.

Liz Pelly: What is your relationship with the song “Single Girl, Married Girl”?

Tanya Haden: I think it’s the first Carter Family song we ever sang together.

Petra Haden: We used to sing it when we were younger, at our dad’s family’s house in Missouri. We used to all sit in the living room and sing songs. That was one of the songs. And “You Are My Sunshine.” “Single Girl, Married Girl” was one that just stuck in my head. We just kept singing it throughout the years, so it just made sense for us for it to be on the record.

Are all of the songs on this record old traditional songs?

Rachel Haden: Our dad’s family had a radio show that the Carter Family would participate in. They were all friends. When Petra and I were in That Dog in the ’90s, we did a cover of “Single Girl, Married Girl.” We got to perform that live when we opened for Johnny Cash at Carnegie Hall. We met June Carter, and we got to shake Johnny Cash’s hand, and he asked us, “How is your daddy doing?” That was a special time.

Why did you want to keep these songs alive?

Rachel: The fact that we’d been singing our whole lives but had never made a record together. I just really wanted to do that before I die.

Petra: We grew up singing these songs. For me, that’s how I learned harmony, by singing country songs. Throughout the years, people would ask us, “When are you going to make a Haden Triplets record?” I’ve been hearing that since I was 16 or 17. We sang [some of these songs] at a benefit performance, and [the producer] Ry Cooder came to see us. He approached us afterward and said he’d be really interested in producing a record for us called The Haden Triplets. The songs are interesting stories about love and loss and all kinds of different stories. We love singing these harmonies. I’ve always known that I wanted to sing with my sisters for the rest of my life. It’s a very rewarding experience.

Tanya: We finally made this record when Ry heard the songs. It was very important to him. He said, “We need to keep this music alive.” You don’t hear it a lot anymore, and it’s an important part of history. Should we talk about Dad’s record? Didn’t we do “Single Girl” on that one? [Yes, they did.] Our father made a record [in 2008] that was a collaboration with a lot of different musicians, and we sang on some of the songs. It’s called Charlie Haden Family & Friends: Rambling Boy.

What’s it like to work creatively with your sisters?

Tanya: Well, our voices are similar. It’s a perfect match, but it’s a double-edged sword. We do fight, which can make it hard for us to collaborate. Also, we’re psychics—we can read each other’s minds.

Rachel: It’s definitely a magical feeling when we sing harmonies together. There’s no other feeling like it. We have our sisterly quarrels and stuff, but that is really separate from the music. Maybe it’s the tension that makes the music more unique and interesting? I know that when I sing with the girls, everything else kind of disappears. All of the fighting disappears. When we stop, that’s when the fighting happens.

Tanya: Except if we’re singing out of tune.

Tanya: Petra and Rachel are seasoned singers. They’ve been in a band. They sing for a living. I’m like the odd man out.

Rachel: Tanya thinks she is the odd man out, but that’s not true! She’s just as much a singer. She sings a song on the record called “Raining,” and it’s beautiful.

Tanya: I’m not a performer. I have stage fright.

Rachel: Yes, you are a performer, and you don’t have stage fright.

Tanya: Yes, I do. You don’t know what goes on in my brain.

Did you have bands together in high school?

Tanya: I quit music when I was in high school.

Rachel: After we graduated high school, Petra and I were in a band together for about seven years. And that’s when Tanya went to art school.

Tanya: But I would play cello on your records.

Rachel: Tanya would play cello on our records and sing a little bit too. She never toured with us, but if we played a show in Los Angeles she would get onstage too.

Petra: The [Haden Triplets record] is not pop music, so it’s a different feel. I guess the similarity is the harmonies. But I’m not in That Dog anymore.

Are there plans for a That Dog reunion?

Rachel: Yeah. There’s going to be new That Dog music really soon. We’re in the middle of recording.

Tanya: I didn’t even realize that. Are you writing songs?

Rachel: Anna [Waronker] is the main songwriter. I’m collaborating with her.

Tanya: Can I write a song and will you guys put it on your record?

Tanya: I’m not kidding. I have all of these songs unrecorded.

Rachel: We’ll see what happens, if any labels want to sign us and release our record. We’ve already recorded four songs.

What made you want to go back into the studio with that band?

Rachel: I missed the feeling of being in that band. I loved it. It had its ups and downs like any other band, but I missed playing That Dog songs, so I approached Tony a few years ago.

Some of my favorite bands over the past years have either cited That Dog as an influence, or been compared to That Dog in reviews—Waxahatchee, Swearin, All Dogs.

Rachel: Oh, I have heard Waxahatchee. I played bass for a week on tour with this band called Upset who are friends with Waxahatchee and Screaming Females, and all of these younger bands. It is cool to see a younger generation of musicians who are influenced by That Dog and Weezer and stuff. It’s really neat.

Petra: Our grandma and grandpa on our mother’s side have all of our CDs—the That Dog CDs and the ones we’ve done with our own personal projects.

Tanya: Dad was really supportive of That Dog.

Rachel: Our dad would come to see us play and was a big fan and was really proud that we were playing music. And grandparents were really supportive. They were proud of us. Our grandmother on our mom’s side would always say, “This is going to be a hard field for you if you want to make a good living.” But I always ignored that. ♦

Liz Pelly is a writer and editor based in New York. She spends a lot of time organizing shows and editing an online alt weekly, fvckthemedia.com. You can contact her via email, Twitter, or Tumblr.