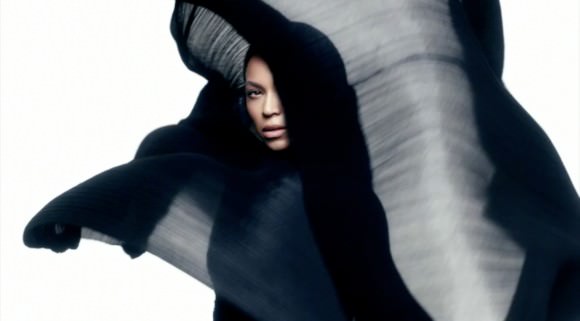 Beyonce in her video “Ghost,” a li’l manifesto for upping her own game.

If last month, Forever, was all about nostalgia and savoring precious moments, this month is about GETTING ON WITH YOUR LIFE. I’d be lying if I acted like this wasn’t a theme that’s more personal for me. See: my journal entry from December 4:

My Forever editor’s letter went up on Monday and it’s been so heartening to see the response, to have it out in the world, to feel a sense of closure…I am no longer afraid of not experiencing moments of Strange Magic; I am finally able to look forward to what’s ahead…like on the walk to school today, I decided to try out the Replacements for the first time, and the first song I listened to was “Alex Chilton” off Pleased to Meet Me, and I played it like four more times, throught the whole rest of the walk, because it filled me with the most amazing dancing + crying feeling, and I know nothing about them but these lines slayed me:

It’s such a teenage feeling, that moment of discovery followed immediately by obsession. But I decided this morning that it can be a me feeling, too; a simply human feeling, if you go about being a human in a fulfilling way. Instead of following this magical feeling with a mournful one like I have been lately—ENJOY IT, SOON YOU’LL BE OLD AND JADED AND EMOTIONALLY REPRESSED—I followed it this time with one of excitement, anticipation, just plain positivity. Not because I’m depending on the future being great, but because I know it will at least be itself, aka more living, aka more feeling.

ANAHEED: We’ve done a lot of stuff about indecision, and how it’s OK not to be sure. But we haven’t really covered those times when you just KNOW YOU’RE RIGHT. What does that do for you, what kinds of decisions do you make when you’re sure? How does your relationship to fear change? How hard is it when you’re young (and female!) to convince people that you’re right? There’s real value in normalizing indecision and heralding the courage it takes to change your mind, but when that’s all that’s talked about, it can make you start to doubt your own convictions—especially since young people are constantly told that their perceptions and beliefs are worth less than older people’s. When you’re a teenager people are always like, “You think that now, but you’ll change your mind,” so I think it’s valuable to put some words and images and heft behind validating the surer moments, when you just KNOW. I wanna support those kinds of insights, because they lead to greatness.

ME: Such as Rookie! When I started my blog, at first people questioned whether I wrote it myself. Then, once it was understood that it wasn’t a scam, they questioned whether I really *got* what I was talking about—like, Do you even understand that designer’s history or how important that band is??? Then once people were like, K, she knows what she’s talking about, it was like, Well, isn’t that BAD for a CHILD to KNOW ALL THAT? Shouldn’t she have time to BE A KID? It went through some more cycles and then I started Rookie and now people seem to get it and no one really bothers me anymore. Or at least I don’t read what they have to say anymore because I am too busy executing my ~VISION~ and preserving my own bubble of stuff that inspires and motivates me.

My point is that there is always a reason why you are in over your head, but you have to POWER THROUGH IT and literally not have time to deal with it because you are too busy being ON THE MOVE. When Comme des Garçons first showed in Paris, fashion critics were so confused by how dark it was because it was the ’80s and everything else was bright/colorful/gaudy/flashy/YSL/Versace. Then the ’90s came and everyone caught on and minimalism and asymmetry and all-black was everywhere. Rei Kawakubo said she’s concerned when people love her collections right away, because that means she isn’t ahead of the times. Greatness is often first met with suspicion; sometimes you know what you’re doing is interesting and new precisely because people don’t like it. I think it’s good to carefully consider criticism, but once you’ve done that and you’re sure of yourself, you need to really develop a habit of shoving doubt to the side and moving on, and this month should inspire our readers to do so.

ANAHEED: A while ago I read that almost half of young Evangelical Christians support marriage equality, while something like 12 percent of older Evangelicals do. This is true of so many issues—younger people see the issues clearer and are more right-er. Which is why I can’t wait till you babies take over the whole world. And I’m psyched, after the intense monthlong farewell to youthful ideas about the future that will be Rookie in December, to spend January embracing the next moment, when you suddenly see the (near) future really clearly, and it makes sense, and you make sense in it. It’s the moment when you emerge from a long and important hibernation/gestation period of looking inward, to look out at the rest of the world a little more. I like the paradigm of growing up as getting lighter instead of being weighed down, so you can fly higher. It’s still part of being young, but it’s the part of being young that = freedom. I dunno, I just feel like this will be a month of EXCITEMENT about THE WORLD OUTSIDE.

ME: Yes yes yes. December will be a good bittersweet nostalgic month, fitting with the holidays and the year ending and all that, but by January it will be time to move on. A lot of the stuff I am mourning in December/my editor’s letter is no longer having these teenage moments of INTENSE CRAZY FEELING. Like Olivia said here, everything feels like the end of the world when you’re 15. That stuff can feel really strangely great in the moment or—especially—when looking back and romanticizing the moment, but there’s a different kind of happiness that is less fleeting and more substantial. I go on and off antidepressants depending on my schedule and how much I can afford to ~feel everything~ at a given moment, and every time I am off them for too long and then start taking them again and get clear-headed, I’m able to be like, Oh, right, I am a more complete me when I can think clearly and execute my ideas and make something of my feelings, instead of just having these sporadic bursts of extreme chemical joy or sadness. Like the episode of Girls where Hannah stays at Patrick Wilson’s house and is like, Wait, what if I don’t have to be CRAZY and FEEL IT ALL? What if simple boring stuff like reading the paper and having friends makes me happy? Isn’t that OK too? At the same time that this month is about how old people CAN’T HANDLE THE TRUTH, it is also about how it does not make you boring to grow up a little and value stuff like your health and your family and what have you. #eatpraylove.

When Danielle asked Ellen Forney about the trade-off between being healthy and stable and not having those end-of-the-world moments anymore, Forney said:

You know how it is when you first totally fall in love with somebody, and you’re just like still crushing, like HEAD over heels, like, Awwwww! Like, I can’t even believe this experience would be happening! Right? And then let’s say that relationship extends into years. And then, ideally, four years down the line, you have this sense of deep love. And it’s still an extremely strong sense, and you can say that it’s even stronger because your feet are on the ground, and you can say, “I have this great thing.” It’s like that.

So this month is like, yeah, it’s special to have those great moments of intense feeling, but it’s also cool to not hate the world and to be productive and to know what you want and to get it done.

And, from the email I sent our staffers, to get a sense of this month’s vibe:

If Beyoncé’s new album had come out before we’d started brainstorming, that email would have also just included her name over and over again. If you’re ever in a rut, just watch this interview and feel eternally inspired to RUN YR OWN SHIT.

And HEY, while I’m pasting little scraps of Vision inspiration, some of our staffers have been sharing New Year’s resolutions. Some of my favorites include:

“Make a list of enemies and outlive them.” —Lola

“Remember that I’m still in this phase.” —Brodie

I love you, Rookies.

To a VISIONARY new year,
Tavi