A song premiere featuring very menstrual instrumentals, plus a mini Q&A session with the band. 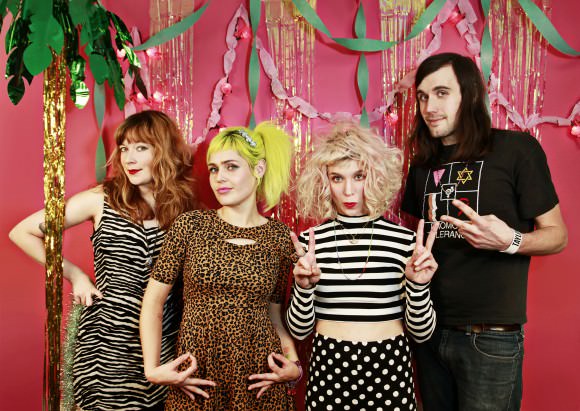 Tacocat is a Seattle-based foursome named after two of our most beloved things, which, when you squish ’em together, just so happen to make up an equally great palindrome. Emily Nokes, Bree McKenna, Lelah Maupin, and Eric Randall have a lyrical knack for balancing the fun parts of life, like eating Peeps, with its less-rad moments, like getting a urinary tract infection. They put this skill to great use on their upcoming record, next month’s NVM (the title is a text-speak nod to the classic Nirvana record). On it, they address street harassment, daydreams about building a bridge to Hawaii, and, on this new single, “Crimson Wave,” wanting to listen to the Cramps when you’re on the rag (har dee har har). You can stream it just below and read on to hear the whole band’s philosophies on PMS remedies, the high price of tampons, and the best possible response to “I’ve never seen a girl drummer before!”

MEGAN SELING: Emily and Bree, as music writers as well as musicians, you two are responsible for one of my favorite articles ever, an October 2012 “Men Who Rock” feature in the Stranger that mocked Rolling Stone’s ridiculous annual “Women Who Rock” issue. Do you feel like people in the music industry are starting to realize that there needs to be a shift in the way women in bands are discussed?

EMILY NOKES: I think they are. We’ve always used a strong hand with humor. Instead of channeling how super-angry certain things can make you feel, we express our feminism by being more like, “Dude, things are so fucked up sometimes, and people write the dumbest shit.” In my experience, making jokes about that kind of stupid stuff has made people check themselves more than when people yell at them about it.

ERIC RANDALL: It makes people feel dumb about their own issues and want to change them instead of making them sensitive about what they’re saying.

EMILY: Parody is so, so funny and powerful in that way.

LELAH MAUPIN: If we were playing in a smaller town five years ago, the same thing would happen to me every time, without fail: Some dude would be like, “Girl drummer? I’ve never seen one!!” I’d just be like, “Well, here I am!” But that doesn’t happen as much anymore. I feel like today, if you don’t have a girl in your band, no one cares about your music.

EMILY: And not because every band should have a token woman in their band, but because I think all-dude bands are played out.

ERIC: To me, the most frivolous genre out there is Boring Dude Rock.

Are there any other bands out there that are contributing to the feminist discussion with a sense of humor?

EMILY: Bree’s other band, Childbirth, has the same kinds of things going on that we do, but with more of a queer bent. It makes fun of the fact that people still, in 2014, are asking, “How do lesbians have sex? Like, how do you do it?” [laughs] I’ve always loved NighTraiN so much for how their lyrics are sexy in a no-bullshit way, too. Just, like, “We’re women who enjoy sex just as much as any dude.” They are so killer.

This track, “Crimson Wave,” is my new favorite song about menstruation. What are your favorite home remedies for coping with PMS?

LELAH: Believe it or not, we have a song called “Pocket Full of Primrose” on the new record about how I discovered primrose oil for PMS! It truly makes me feel way better—I take it every day.

EMILY: I can attest to that too. It’s a pretty good remedy! I also live for this idea that one day, women will get to take paid sick leave when they’re on their periods. I mean, let’s be real: If men had periods, we wouldn’t have to pay as much for toilet paper and we’d have a week off work every month.

LELAH: I get really upset that I have to spend so much money on tampons.

EMILY: Yeah, and I get upset that I have to wake up just as early as ever and go to work when my body feels completely different from how it usually does. But if I had the flu, my job would understand!

I think there’s still this misconception that bands can’t be fun, smart, and taken seriously at the same time, but Tacocat is successful at finding that balance. You have a song about the male gaze right next to a song about getting stood up by the bus. Do you ever worry that the more serious messages in some of your lyrics get lost because of how upbeat the music is?

EMILY: We always write out our lyrics in our liner notes, but it’s hard to strike the balance. We want to write really fun songs, but sometimes the issues we’re trying to sing about are a bummer, and the challenge is how to make our music fun and not always feel like some kind of schtick.

BREE MCKENNA: I think our songs are very lyrics driven. All of our songs are little stories that we relate to or feel strongly about, so I think the messages in them are pretty clear. Maybe some people wouldn’t get it, but I think that most people who listen to us totally do! ♦

Megan Seling is a writer, a baker, a longtime resident of Seattle, and the author of Bake It in a Cupcake: 50 Treats With a Surprise Inside.