An Illustrated Guide to Crystals

A list of semiprecious stones and their (completely unscientific) associated vibes. 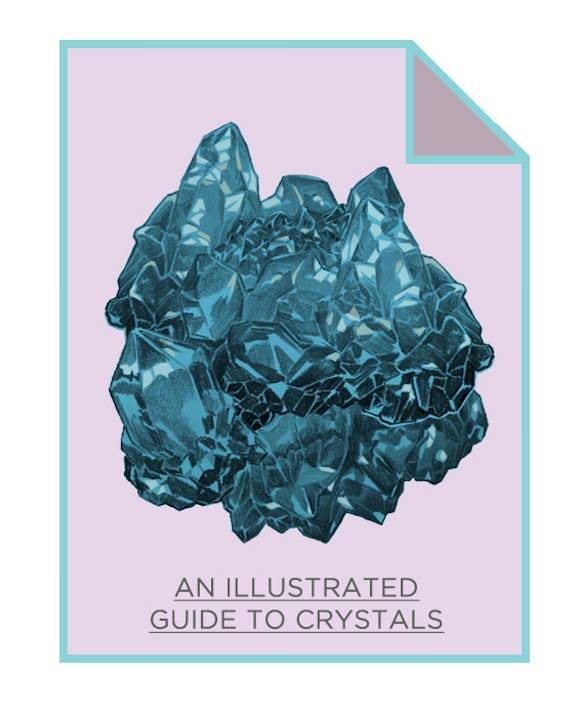 All illustrations by Allegra.

Let’s talk about crystals! No, not the sparkly little gems you put on your nails—I’m talking about stones that are formed in the earth! Powerful stones, that many people (Buddhists, certain Catholic nuns, Hindu healers, witches, me, etc.) believe have healing properties and positive energies.

Crystals and gemstones have been used for centuries for meditation and in medicine and rituals. Each type has its own characteristics and, some say, its own unique vibes. Some are said to be good for grounding yourself when you feel out of sorts, some for easing sickness, others are supposed to bring you luck in areas like love and money. There’s no scientific proof that they have these powers, but in my experience, carrying a crystal is like going to a psychic or keeping a vision book. Sometimes they’ve helped me get the results I’m looking for.

Briana Luna, aka the Hood Witch, is a Seattle–based crystal enthusiast. She says that “each crystal has a purpose. The ones we are most drawn to are the crystals our bodies need the most. They are gifts from the universe, asking us to never forget her and to use her wisdom to create happier and more balanced lives while we’re here.” They’re nothing but good vibes, so why not? Here’s a guide to some of my favorites crystals and gemstones, which are also among the easiest to find (you can buy them inexpensively in places like yoga studios and stores that sell dream catchers, tarot cards, etc.).

Tiger’s eye. This gemstone got its name from its resemblance to the actual eyes of actual tigers. It’s said to grant power and protection to those who carry it. According to Luna, it can also assist you in resolving problems objectively, unclouded by emotions. If someone is giving you the stink eye or putting you down at school, try carrying this stone around to help summon your courage. I like imagining that RuPaul lives in a castle made out of tiger’s eye, and I carry one of these gems when I’m feeling nervous about something and want to be FEARLESS like Ru.

Amethyst. The word amethyst is derived from the ancient Greek word amethustos, which means “sober” or “without drunkenness.” That makes a lot of sense, because this stone is supposed to protect people from overindulgence. I have an amethyst necklace that I wear every day—except for this time I went to a party (last night) and basically ate a block of Manchego cheese by myself. I mean, we ALL LOVE CHEESE, but I was like a starving madwoman who never had cheese in her life! I could have used some help there. Then again, NO REGRETS. I just know how to party, oh-kaaaay! Amethyst is also rumored to enhance psychic powers! That’s actually why I wear it—gotta strengthen the old third eye.

Rose quartz. Chances are, you’ve heard of or maybe even already own a piece of rose quartz, which is known as the ultimate “love stone.” Have you ever heard of chakras? In Hindu, tantric, and a few other spiritual practices, they are thought to be hot spots in the body where paths of energy meet up. Each chakra (most traditions identify seven) connects the body to a different part of the conscious mind, like willpower, creativity, compassion, and love. Some people believe that rose quartz’s vibes can help stir up energy in the heart chakra, which would help a person open themselves up to giving and receiving love. Maybe that means connecting more deeply with friends and family. Maybe it’s attracting this week’s crush? I’ve definitely experienced more love and healthier relationships since I’ve used rose quartz in my meditation practice. Now let’s see if I can get Donald Glover to appear on my doorstep holding a bouquet of roses and a Taco Bell party pack.

Sunstone. This crystal is purported to bring good fortune and abundance, and for any of you who happen to be living through what feels like month 100 of winter, Luna says “it’s also believed to help lift dark moods and be beneficial for seasonal affective disorder.” Why not just carry this one around all the time? I always feel a bit happier when I have some sunstone on me.

Clear quartz. “These crystals are excellent at tuning in to our own energy, as well as filtering out unnecessary distractions,” says Luna, “which is why they make for wonderful meditation tools.” Or, I’d extrapolate, studying tools? Hold one in your hand while you meditate on all the information you want to remember. You never know—the quartz could help you soak it all up! I mean, I’m fairly certain that my having committed the lyrics to every single Prince song to memory is attributable to my clear quartz stone!

One last note about crystals, which I’ve found to be croosh: People who believe in their powers insist that each new crystal needs to be “cleansed” before you try to use it, because they’ve soaked up the energies of other people who handled them before you. I bought a piece of flourite (sometimes referred to as the “genius” stone) a while ago to help with writer’s block, but it just made me feel weird, and like I couldn’t concentrate. That was before I learned the importance of cleaning your crystals. There are lots of cleansing methods that are said to be effective—leaving them under sun- or moonlight, burying them underground, etc.—but plain old water seems to do the trick, in my experience. You can use water from a natural source like a river, stream, waterfall, or rainfall, “but tap water works just as well,” says Luna. Again: this isn’t science. But really, if a lot of people have handled something before you acquired it, it’s just generally a good idea to wash it before you carry it on your person.

I’ve been meditating with and carrying crystals for about three years, and honestly, they’ve helped me grow spiritually. They are a physical tool that helps me connect to a positive mental shift. I’ve gotten the side-eye from plenty of skeptics, but who cares what anyone else thinks? I’m gonna keep ignoring the naysayers and trusting myself. ♦