Why Can’t I Be You: Lisa Darms

She has created probably the world’s biggest archive of punk-girl history…and had to figure out what to do with a bottle of poop. The rewards and hazards of life as an archivist. 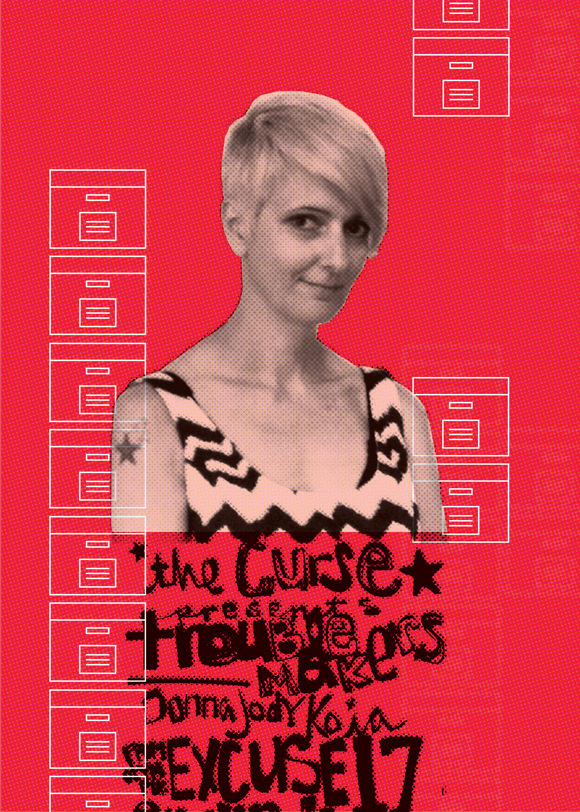 As the senior archivist at the Fales Library and Special Collections at NYU, where she oversees almost 400 separate personal archives containing, in total, around 15 million documents, Lisa Darms helps us understand historical figures and movements through physical artifact. She maintains the Downtown Collection, a set of videos documenting punk culture in New York City in the 1970s; the Marion Nestle Food Studies Collection, and the Riot Grrrl Collection, which she created in 2009. The archives include documented records like letters, manuscripts, and journals, as well as considerably more-esoteric objects (it might be the only library on earth that houses a taxidermied reptile—more on that later). I interviewed Lisa over email this week about why archives are important, how her background as an artist influences her work, and what you do when you’re asked to catalog a bottle of poop.

AMY ROSE: How did the Riot Grrrl Collection come to be? Were you involved with that scene?

LISA DARMS: I started going to punk shows in my hometown in the early ’80s in Canada when I was really young, and I moved to Olympia, Washington, to go to the Evergreen State College in 1989. I was part of the punk community in Olympia and a self-proclaimed feminist, even attending the famous Girl Night at the International Pop Underground in 1991, but I never went to a Riot Grrrl meeting, even though I was invited, basically because I was shy.

I started the collection with the help of Kathleen Hanna, who is an old friend. I’d thought idly about how great it would be for such an archive to exist, but the idea began to take shape when Kathleen, Johanna Fateman, and I attended a panel discussion at Fales, right at the time I was interviewing for the senior archivist job, that was about artists donating papers to libraries. Kathleen was especially excited about the idea of a Riot Grrrl archive, so it began to seem like a very real possibility to me.

Once I got the job and had been working for a while, I brought up the idea to our director, and he could immediately see how it would make sense next to the Downtown Collection. We contacted a few people who had been part of the movement from the beginning, and then the collection got a lot of unexpected (to me) publicity, which helped me get the word out to potential donors.

What are some of the most interesting or surprising parts of the collection?

At Fales, we have a very broad concept of what a “document” is, so we’ve got a lot of unusual things like stage sets; T-shirts; and functional objects, like a skateboard with Fight Homophobia stickers all over it from Outpunk [the first record label entirely devoted to queer punk bands].

Some of the oddest things we’ve had [at Fales] include a taxidermied alligator in the David Wojnarowicz Papers and a positive pregnancy test in the Martha Wilson Papers. Although most people think of zines when they think of the Riot Grrrl Collection (and we do have over 900 of them!), my favorite things are letters, drafts of lyrics, notebooks, and sketches—places where you can really see these teenage girls working through ideas and trying new things. 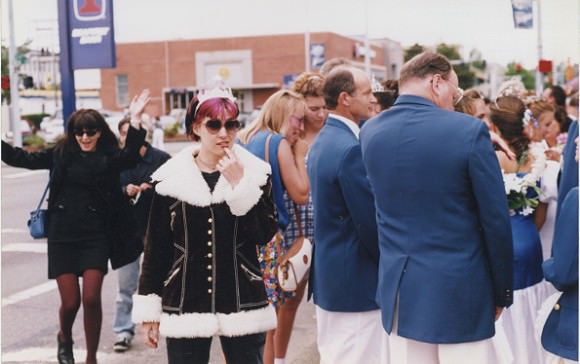 Lisa Darms, far left, clowning in a brown wig with Kathleen Hanna, center, back in their days as roommates in Olympia, WA. Courtesy of Lisa Darms.

My first career was in photography—I worked as a one-hour photo printer and then as a custom printer, and I was also in an art group called Thin Ice. Eventually, I got an MFA in photography because I was hoping to become a professor, but the job market was abysmal. While I’d worked on my MFA I’d become more interested in art history and research than in studio practice, and I’d always had a nostalgic streak in terms of my aesthetic preferences, so archives seemed like a good fit.

Can you walk us through what an average workday is like for you?

Most people seem to think I am a conservator—that I repair and reconstruct historical documents—when really the small amount of preservation we do is largely preventive. People are also usually surprised to learn how many items just one person’s archive has—the average artist’s papers at Fales is probably around 40 banker boxes of documents. We have some gallery archives that are 350 boxes!

Because I’m in a management position, I have a lot of different duties. I work with potential donors, sometimes visiting peoples’ apartments or storage spaces to assess their collections. I also unpack and inventory new collections. Since I don’t receive individual submissions, but rather people’s entire personal records, archiving each new entry that we accept is a pretty slow process. Right now the Riot Grrrl Collection alone is made up of 16 individual archives totaling about 100 boxes. I also supervise our processing archivists, do reference work with our many scholars that use the collections in their work, collaborate with curators who want to borrow our materials, teach classes for professors based on our collections, and oversee the digitization of select collections. Every day is different and challenging, and I like that. 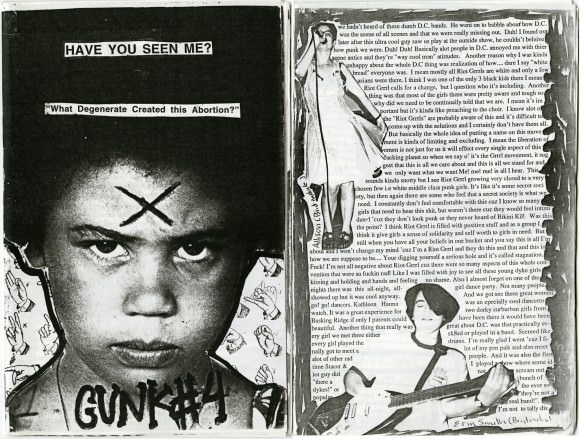 The fourth issue of “Gunk,” a zine by Ramdasha Bikceem, 1993. Courtesy of the Riot Grrrl Collection.

How do you decide if someone’s personal collection is a good fit for the library?

We are looking for unique items that document a person’s work. So, rather than your collection of mass-market magazines, we’d like to see the collages you made from these magazines that eventually became your album cover. Or, we want a copy of your zine, but we also want the master copy, the artwork that went into it, the zines you traded for it, and the letters you sent and received about it.

How do you inventory a collection?

When a new collection comes in, we accession it. This means that we account for everything, make sure there’s no preservation issues (Mold! Bugs!), do a general inventory, and create records about its provenance, or who created it, who donated it, etc. At some future date, we’ll process the collection by rehousing documents into acid-free folders or boxes, arranging everything based on how the donor arranged it her- or himself, and then create a finding aid, which is a long, contextualized inventory that you can view online.

What is the most challenging part of being an archivist, and what’s the most rewarding?

The most rewarding aspect of my job is knowing that I am helping to preserve important histories and making them available to the public at no cost.

The most challenging aspect for me is the extreme lack of resources. That’s partly a failure of the profession, because most people don’t understand what archives are and why they’re important. One of my own mistakes was not realizing how popular the Riot Grrrl Collection would be! If I had it to do over, I would take more time and get more advice and work more collaboratively with others.

Now that my book, The Riot Grrrl Collection, is out, I’m hoping more people will learn about the collection and want to donate to it.

How did you design an educational and professional path to get to where you are now?

Archivists used to have to learn the trade on the job or through mentorship, but there are currently two academic paths to becoming a professional archivist: a library science degree or a masters in archives. I took the latter route and got an MA in history and archives from NYU. My background in art history and photography definitely helped me get my job at Fales, because so many of our archives are from galleries, art collectives, and artists, but it’s hard to predict what kind of supplementary knowledge will come in handy, as each archive or special collection has its own areas of focus. 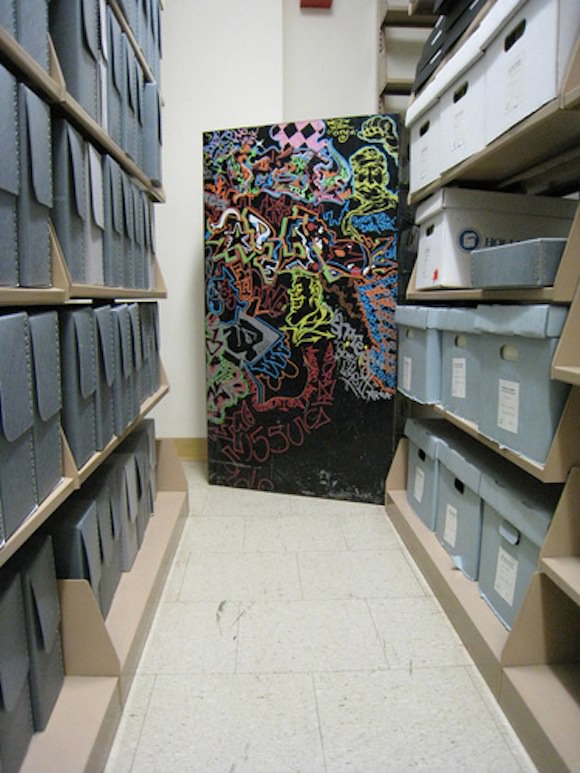 A filing cabinet tagged by 1980s graffiti writers, included in the Fashion Moda Archive at Fales.

How do you figure out how to organize and arrange all of the material in a single archive?

Aside from the weird things like alligators and pregnancy tests (and, once, even a poop in a bottle—but don’t worry, we returned that to the donor!), this makes me think of the archivist’s mantra, which is “original order”: We believe that the way people arrange their documents—whether that’s in physical folders or boxes or in, like, complex folder structures on a computer desktop—helps scholars understand those documents contextually. A newspaper clipping may have very little meaning on its own, but that same newspaper clipping sent to someone in an addressed and dated envelope that also includes a long letter commenting on it is an entirely different thing. Kathleen has a folder in her archive called Fake Activism. The items in that folder would be read totally differently if she’d called the folder My Favorite Activists! or something. But sometimes, and especially at Fales (messy artists, you know who you are!), documents in certain collections are sort of floating free, and the way I contextualize or describe them can change the way they’re perceived.

What would you tell our teenage readers interested in pursuing careers in archiving? How should they get started?

First, be prepared for chaos! Many people think archiving will be programmatic and tidy, but in fact, because you’re working with a huge amount of unique items, there are always surprises and things you don’t know how to store or even describe.

Processing a collection can be lonely and boring, so you need to be happy spending time alone and doing repetitive tasks. Keep in mind that, while there will always be “old things” that need preserving, the field is increasingly focused on the preservation of electronic records, making sure that emails and Google Docs will have the same longevity that paper has had. You might want to volunteer at an archive to see if you like it, or go to your local historical society or library to see if you can access the collections in an exhibition or as a researcher.

Why do you believe it’s so important to archive the past?

Traditionally, the historical record has been created by those in power, based on what is or is not preserved, so it’s important that those of us working in institutions make sure that our collections are as representative and diverse as possible, and that we also support community DIY archives like Brooklyn’s Lesbian Herstory Archives.

Preserving unique documents—be they letters or emails, manuscripts or VHS tapes—ensures that we have a past to study and learn from. Preserving those documents and the context in which they were created, the way an archivist does, enriches our understanding of that past. It makes the past even more complex and contradictory. ♦