A premiere of a sparkling new track, and a talk about staying positive in the face of haters. 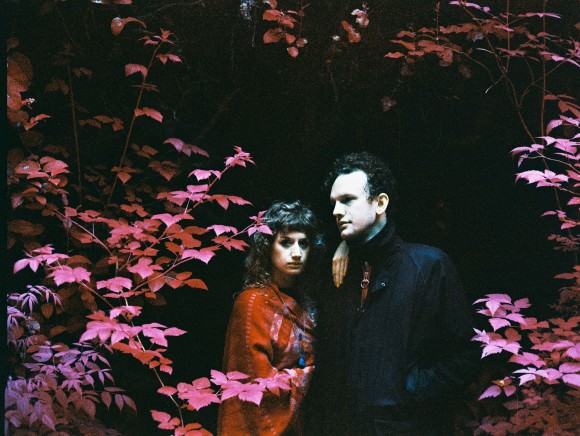 The music of Pure Bathing Culture feels inherently hopeful: It’s in the wide-eyed vocal inflections, the gleaming synths, and the sincere lyrics. The nine dreamy pop songs on their first full-length, Moon Tides, beam with the lightness and excitement of a new beginning, which makes sense: When Sarah Versprille and her songwriting partner, Daniel Hindman, who were in the band Vetiver, decided to make music as a duo, they picked up and moved across the country together from Brooklyn to Portland.

Sarah and Daniel kindly let us premiere PBC’s soft, sparkling synth-pop cover of Jessie Ware’s 2012 hit “Wildest Moments.” Stream the song below, and read on for our chat with Sarah about astrology, her first experiences with songwriting, and how she stays optimistic.

LIZ PELLY: What drew you and Daniel to this Jessie Ware song?

SARAH VERSPRILLE: We loved the song from the first moment we heard it. It’s an amazing track. Jessie Ware is such a great singer. I’m not totally sure what she was thinking when she wrote it, but it came across to us as a relationship song, or maybe a breakup song. But then it sort of ended up taking on a different meaning when we were working on it. Instead of being a relationship song, it started to be about “Isn’t it so wild and crazy just to be doing this?” It is a crazy experience having a band and being creative and having the opportunity to put your music out there in the world and having people comment on it and give you their opinions. Sometimes it’s good, and sometimes it’s bad.

Moon Tides was inspired by astrology. How did you get into that?

When we moved to Portland, a friend read our birth charts. That was kind of our introduction into it. It became a muse for us with regard to songwriting. A lot of it is just a really an interesting way to perceive the world around you. Humans have been trying to make sense of the world for thousands of years, and astrology is a method that’s been used for centuries to figure out why people are the way they are. That was what inspired us to incorporate that imagery into our songs.

Astrology can be hard to talk about. There’s all of this stuff gets grouped in with it. If you look for a book about it, sometimes you’ll also see a book about fairies, or about “witchcraft in the modern age.” And all of that stuff is totally rad, but there’s a difference between that and talking about something like the sign of Scorpio, a constellation that exists in the sky, and someone decided to apply language to what the energy of that meant to them. Which is also so rad.

Moon Tides is also about self-discovery. Did you discover anything about yourself while making it?

Totally. For me, this project, Pure Bathing Culture, is the first opportunity I’ve had to be the lead singer of a band. It’s something I’d always wanted to do, but I hadn’t really found, through my other bands, that part of myself. This whole project is a massive lesson in self-discovery in the sense that I’m just learning how to be a front person, the one delivering the lyrics and the message. It’s been an incredible opportunity to step out and be like, “Here I am! This is what I’m doing!” For Dan, too. He’s played in a lot of bands, but has always played guitar or been the side man. It’s the first time we’ve stood up and been like, “Here’s something we made together and are proud of.” It’s been an amazing journey full of revelations.

It seems like it must be really helpful, as a first-time songwriter, to be writing with another beginner. Like you’d be good support systems for each other.

It’s a really fortunate collaboration. Having someone to bounce things off of, being half of a team working towards a common goal, is amazing.

You’ve said that at first you felt embarrassed about the songs you were writing. What made you feel that way?

When [Daniel and I] started writing music together, what came out of our collaboration was sort of surprising to us. We had to go through a process of realizing that the music we were making sounded the way it did!

There’s this real sense of hopefulness in your music. How do you stay so optimistic?

It’s been really important to us to stay connected to the feelings of positivity and passion and excitement and beauty in making music. That’s the only reason to do it! If you lose touch with that, you lose touch with the reason why you’re making music. We make music because we love making music, and we’re so grateful to be able to make music that can be out there in the world and that people can react to, and have a positive reaction. Or a negative reaction.

How do you handle the negative ones?

It’s really important not to internalize that kind of stuff. If someone is feeling like they want to be negative about something you’re doing, it’s natural to feel bad about it. But you don’t have to believe every little thing that everyone has to say about what you’re doing. Some people will like what you’re doing. Some people are going to hate it. It’s just important to be confident and to believe in the art that you’re making. There are so many people in the world, and they all have ideas. You probably also have opinions that not everybody agrees with. But if you like what you’re doing, the most important thing to do is just stand behind it and say, “Yes, this is me, I’m here, and happy about it.” ♦

Liz Pelly is a writer and editor based in Massachusetts. She spends a lot of time hosting shows at her house and editing an online alt weekly, fvckthemedia.com. You can contact her via email, Twitter, or Tumblr.