Literally the Best Thing Ever: The Golden Record

Thirty-six years ago, we humans collected all that we treasured about life on Earth and sent it off into space. It’s still there, looking for an audience. 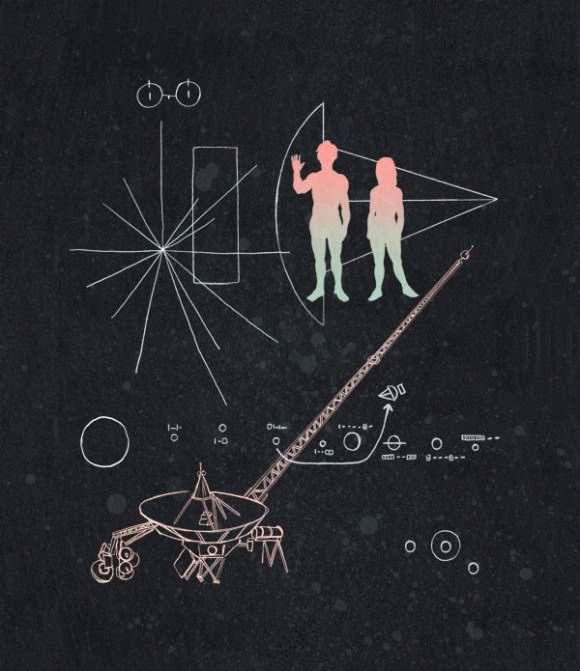 There is nothing about Earth that isn’t incredible. Human beings, I suppose, aren’t always as awe-inspiring as the planet that holds us, but just like our homeland, we have the capacity to create and destroy, to be beautiful and terrifying, and to shine even in the face of vast and unknowable darkness. Not too bad for a little rock in the middle of nowhere, right?

This little planet holds so much history. Giant lizards used to walk up and down the hills! Beasts did—and still do—lurk in the depths of the sea. Humans have evolved and adapted and become complex, intricate thinking machines that sometimes forget our own humanity in order to make what we consider progress. We are a violent species; we are often cruel. Money is the source of many evils, and we have not yet learned how to live together peacefully as citizens of one little planet, though there are always people who believe in and hold on to that dream. It is this type of optimism that reminds me of how beautiful human beings can be when we band together, and I’m not sure there’s an example of human creativity as lovely as the Voyager Golden Record.

In 1977, NASA launched two spacecraft tasked with taking pictures of Jupiter and Saturn and then just flying off indefinitely through and past the solar system. Aboard each craft was a phonograph record, made of gold-plated copper, intended to share our world with any other civilization that the ships might stumble upon it as they floated through space. It was curated by Rookie hero Carl Sagan and includes, among so many other things, the sound of laughter, greetings in more than 50 languages (my favorite: “Welcome, creatures from beyond the outer world,” in Polish, which is gorgeous and creepy and, free tip, possibly the best way for a band to start a show, ever, no?). It also includes pictures, like this one of a woman displaying how X-rays work, and like, most records, it contains music—mostly classical, but Chuck Berry’s “Johnny B. Goode” is on there too, just in case the extraterrestrials want to rock out a bit. As if all that’s not romantic enough, it also records the brainwaves of a woman falling in love. That woman, Ann Druyan, was the creative director of the project; she and Sagan had declared their love for each other a few days earlier.

The thing that’s so great about the Golden Record is that it’s a reminder of how amazing our lives are—that we know to take pleasure in the sound of rushing water (that we HAVE water), that we’re excited to show the advances we’ve made in medicine and the beautiful music our fellow humans have created, and that we’re optimistic enough to essentially expose our location, our technology, and our art to the unknown, hopeful that it will serve as a means of guiding others to us, or preserving our memory and existence long after Earth has been swallowed by the sun. We are basically asking the universe to acknowledge that we exist, and we hope the response is one of peace and respect and love.

The unknown is what makes the entire thing so fascinating: We most likely will never know if anyone finds the record, but the possibility allows for a lot of fun and creepy imaginary scenarios. I mean, imagine yourself being the recipient of a record from outer space—how would you react to the sounds? The pictures? The music? The writing? The fact that there’s an entire civilization advanced enough to launch such a project into space? Do they know you exist? Do they hope you do? Do they still exist or did they disappear lifetimes ago? What if you were an alien who found the Golden Record? Would sounds we take for granted here on Earth terrify you? Would the music sound beautiful or awful? Would the diagrams of birth and human beings and evolution fascinate you or make you cover all 12 of your eyes with your 16 hands?

What if someone/thing does find the record? Will they come to us in peace? Will they try to take us over? Will they come at all? Will they listen to “Johnny B. Goode” and freak out like Marty McFly’s parents in Back to the Future because they’re not ready for that yet but like, their kids are gonna love it? Will they try to communicate with us? What will they send back? It’s a super trippy situation, because the record is OUT THERE, and we’re really extending a hand. It’s just a matter of wondering if anyone will reach out and grab it.

It’s been over 35 years since the record was launched aboard Voyagers 1 and 2; there are probably a million sounds we could add to it today, and this is where it gets really fun—imaging the weird mixes you and your friends could make to share with alien civilizations (and one another)! It’s a spooky/cool way to geek out about space and figure out what’s really important to you, what you love about the world we live in, and what you’d choose to represent that world to the rest of the universe. There are always the nature sounds: seagulls at the ocean, howling winds, crashing waves. But there are also modern updates to the original record’s contents: smartphone bleeps and bloops, speeches by various historical figures, Damien from Mean Girls calling out, “Four for you, Glen Coco! You go, Glen Coco!” What else?

The Golden Record is a time capsule, showing that at least for one moment, we came together to catalog humanity as a whole, taking pride in one another and in our planet, celebrating all that we are and proclaiming our faith that somewhere far outside our own solar system, there just might be someone who finds our story and thinks it is just as beautiful as we do, and well worth saving. ♦