Literally the Best Thing Ever: The Eternity Puzzle

The deceptively simple games that made a math lover out of me. 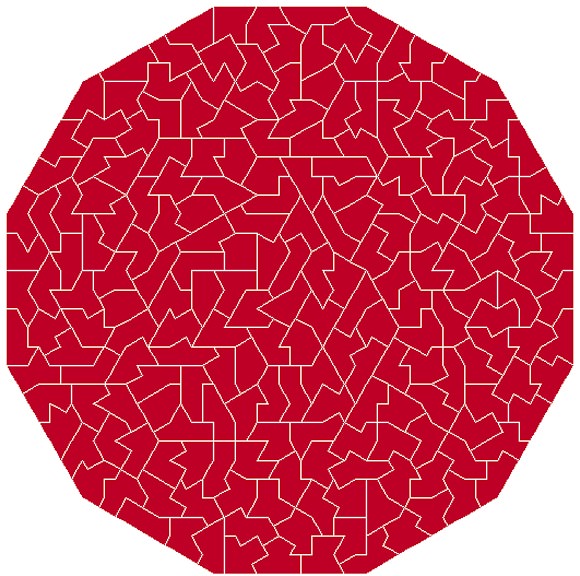 One of the known two solutions to the original Eternity puzzle. Via Math Puzzle. Eternity pieces copyright (c) 1999 by Christopher Monckton.

Math is a pretty distant memory for me—I haven’t done anything more advanced than working out tips or bills since I was in high school—but a couple of the mathematical things I vividly remember learning about were tangrams (puzzles involving seven pieces that are rearranged to create different shapes) and tessellations (mosaic-like arrangements where a bunch of pieces of the same shape or a few shapes fit together, usually to create a pattern). The way we learned about the latter was so fun and hands-on: We had to pick one shape that we could copy infinitely on a piece of paper with no gaps in between. It was really absorbing because we discovered that there were so many shapes we could use to do this. The Dutch artist M.C. Escher made some really famous and mind-blowing ones. While my brain didn’t crackle with excitement while tackling other kinds of math problems, I really enjoyed working on tangrams and tessellations—I loved how creative I could be when fitting shapes together to design whole new images. After I’d been playing for a while, I started to notice the little shapes that make up so many things around me: the tile pattern on your bathroom floor, the design of a quilt or a rug, the arrangement of the scales on a fish or the cells of a honeycomb.

My fascination with these kinds of geometric puzzles and arrangements was reawakened a few years back, when a friend told me about the Eternity puzzle. Eternity was created in 1999 by the British journalist, politician, and viscount Christopher Walter Monckton. He claimed that the 209-piece jigsaw puzzle was virtually unsolvable, and offered a prize of £1 million (about $1.6 million) for anyone who could crack it within four years of its release. I wasn’t the only person who found Eternity so interesting—more than 500,000 copies have been sold around the world.

The Eternity box contains a dodecagon-shaped frame (12 sides!) that you have to fill in using 209 puzzle pieces. What makes it so hard to solve is that, unlike with regular jigsaw puzzles, there’s no picture to help you figure out what pieces go where—every piece is the same shade of green on both sides. Compounding the difficulty, there are no little protrusions or indentations that fit into each other—all the edges are straight lines, and so you have no idea which ones are supposed to go next to which other ones. And there’s not just one right way to solve it. So far two have been reported out of, according to one Australian mathematician’s estimate, 10-to-the-500th-power possibilities. That’s 10 x 10 x 10 and so on, till you have 500 10s! I can’t even imagine how you might start something like that. I’ve read that lots of brave people who attempted it got stuck at 150 pieces or so, then couldn’t fit the rest of them into the frame. Advanced solvers got to 206 or 207, which seems infinitely more frustrating!

It was finally solved in just under a year by two cool cats from Cambridge, Alex Selby and Oliver Riordan (see their solution at the top of this page). They did it by programming a computer to figure out how to place all the pieces. There was a rumor that Lord Monckton had to sell his house to pay out the prize so early, but this was later revealed to be a publicity stunt. 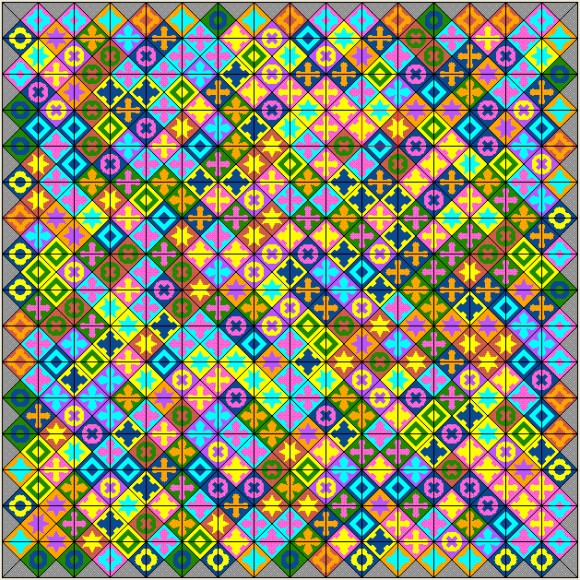 In 2007, a new version was released. Like the original, Eternity II was a puzzle game with prize money offered to the first person to solve it. But E2 upped the stakes the considerably: This time around, there were 256 pieces (to be arranged in a plain square), and a £1.2 million (or $2 million) payout.

There’s one more important difference: Eternity II hasn’t been solved yet. Like I said, I’m not good at math—but maybe you are! How amazing would it be to be the one to finally figure it out? Here’s a mini version you can practice on. And E2 itself provides a couple of clues: The game comes with one piece in the correct place and two small “clue puzzles” that you can solve to be sent the location of a second piece. And yet no one’s gotten it yet, after six years of trying!

Eternity II is based on a mathematical construct called P vs. NP (sometimes written as P=NP). The only things I know about P vs. NP I learned from an episode of Elementary where Holmes and Watson were trying to find out who killed two people who were close to solving this incredibly difficult equation (and these facts are apparently not totally made up, because the show hired math experts to help them with the technical parts of the script) and one New Yorker blog post. Here is what I’ve gathered: P vs. NP is not just a simple equation like the ones I know how to figure out; it’s kind of like an equation that tells us about other equations. It basically asks whether P (problems we can easily solve) equals NP (problems whose answers we can easily check). I didn’t really understand what that meant, either, but the same New Yorker post that I ganked this definition from provided a great example that made it clearer: Say a person is trying to guess your email password. It would take them a super-long time to figure it out, but it would take less than a second to check to see if their guess was right. So, if there’s super easy way to check someone’s password, is there also a super easy way to guess it? If there is, and if the same is true of ANY problem we can solve, then P = NP. So if a computer can check a solution to the Eternity puzzle very fast, there may be a way to program it to solve it just as quickly. Which means that if someone solves Eternity II, while they won’t win $2 million (the deadline for that prize has come and gone), they might be a big step closer to solving millions of unsolved problems in the world! WHOA.

I’m embarrassed to remember one moment back in 11th grade math class when I was particularly frustrated with my lack of progress on a problem. When the teacher mentioned that there were far more advanced versions and applications of the math we were learning, I called out, “What more math could there even be in the world?” She kind of rolled her eyes and laughed, then she explained there was infinitely more to math than what we were currently studying. I can see what she means now. Something as simple-seeming as a puzzle has connections to extremely sophisticated mathematics that can be used in the real world to affect things people do every day. Math can be beautiful, fascinating, and useful, even to someone like me.

I think the reason I love the Eternity puzzles so much is that they help me remember I’m not really a person who hates math—sure, I’m not great at working out equations, but I’m just as interested in how the world around me works, or how it’s put together, as people who use math as their primary tool to understand it. While I’ll be sticking with my Elementary-level (pun intended) math problems, I’m totally excited to know there are people out there designing, solving and interpreting the really big ones. And now I know the answer to my 11th grade question: Math is pretty much everywhere. Once upon a time that notion would have scared me, but now, through examples like the Eternity puzzles, I think it’s pretty freaking cool. ♦