Literally the Best Thing Ever: Sophiatown

It might be gone now, but its music and culture will be fly forever. 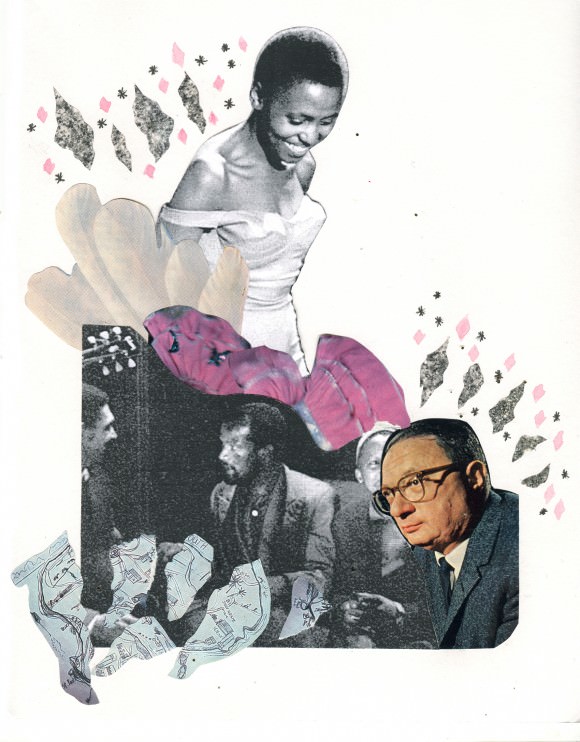 Collage by Camille. Still of Miriam Makeba in Come Back, Africa via IMDb.

When I was 11, the leading style trends in South Africa, where I live, seemed to shift overnight. One day, everyone was copying American pop and R&B stars (Destiny’s Child’s “Jumpin’ Jumpin’” video was my personal fashion ideal), and the next, they were wearing T-shirts depicting Miriam Makeba, a legendary musician from the artistic era that came out of a little city called Sophiatown in the 1950s. Although I’d come to adore her work, I’d only ever thought about Makeba as some old singer until I saw women styling their Sophiatown-centric T-shirts with traditional African-print A-line skirts, Converse high tops, oversized shades, and chunky wooden accessories. After years of mimicking the clothes people wore in the States, it had become hip to wear South Africa on your sleeve, and my excitement to explore the identity politics of why that was led me down a path of discovery into the spirit of Sophiatown—a culture that remains forever young, and forever fly.

In South African history textbooks, the section dedicated to the ’50s is usually about Sophiatown, a residential area outside of Johannesburg that nurtured a new approach to jazz culture and became a symbol of black self-determination. Beyond those T-shirts, I first learned about it not from school, but in conversations with my grandmother. As a kid, I found it very amusing that she had once been young too, so I’d listen eagerly as she told me stories of fun nights she and her friends spent dancing and in drinking halls, all the while looking to the new trends coming out of Sophiatown to see what was happening next. I vaguely imagined it as an elder sibling of sorts, always dictating what was cool and current.

When I went through my grandma’s photo albums from back then, I’d never seen young people with such impeccable senses of style before. In these sepia-toned photographs of my grandmother and the ones of strangers I found later on in those history textbooks and my own internet searches, I came to consider Sophiatown the golden age of style and sophistication. I loved the look of the women’s mid-calf dresses, kitten heels, and berets and the men’s suspenders and two-tone Florsheim brogues, but what really struck me about the pictures was how well they conveyed the dignity of their subjects and captured the dazzling energy they carried in their smiles.

My admiration for the people of Sophiatown grew with the knowledge that they had not only lived, but thrived in a society that was plagued by an oppressive and dangerous government. The existence of Sophiatown represented one of the most subversive ideological threats to the notoriously racist apartheid political regime in South Africa by simply refusing to live by its laws. This was enormously revolutionary, because in the 1950s, restrictions enacted by apartheid came to control virtually every aspect of South African life. One of the most divisive was the Group Areas Act, which divided the country into segregated areas by race. Every black person was made to carry identification documents and show them to any white person on demand, and they faced imprisonment if they left their designated areas without a work permit. And this was just one of the apartheid laws that sustained the ever-growing hate, fear, and suspicion between the races—the government enacted many more legislative systems of oppression during their nearly 50-year regime.

Given the severity of these restrictions, Sophiatown was a miracle. Since the land was deemed “unfit” for all-white residency, dealing with Sophiatown wasn’t an immediate priority to the apartheid government when it first came to power in 1948. So, for seven years afterward, Sophiatown continued to make its own rules, as it had since it came to be in the late 1800s, and it was a small bubble of reclaimed freedom that was home to all races during such a deeply segregated time. Black residents were able to do things that were off-limits for most nonwhites in the rest of the country, like drink liquor and, incredibly, own their own houses. As apartheid laws became more and more totalitarian, Sophiatown’s population grew immensely as news of its existence spread, and the town’s ethnic diversity resulted in a robust exchange of ideas. Away from the pressure to become domestic servants and laborers, creative fields became viable career options for nonwhite writers, journalists, and musicians. Women, who were largely relegated to homemaking roles outside of Sophiatown, also flourished as entrepreneurs and, legendarily, as entertainers in their own right.

Many iconic jazz musicians, including trumpeter extraordinaire Hugh Maseleka and future T-shirt queen Miriam “Mama Africa” Makeba, who often sang in her native language of isiXhosa, began their careers in Sophiatown’s nightclubs as teenagers. Dorothy Masuka, another female Sophiatown pioneer, gained her fame at age 18 as a singer of “African jive,” which combined elements of jazz and indigenous music. When I discovered the work of these artists after seeking out the people depicted in my grandmother’s photos and the clothing of stylish women I saw around me, I fell in love with the way they fused South African music with a classic American genre to create an all-new (and deeply awesome) sound that was distinctly Sophiatown’s own. The influence of American movies and music informed more than just the songs of Sophiatown, too: The carefree spirit and portrayals of “cool” culture that its residents observed onscreen and on the radio took root in the township on a social level, and holidays and weddings were celebrated with huge gatherings in people’s yards and streets, where live bands entertained the guests.

“Pata Pata,” recorded by Miriam Makeba and written by Dorothy Masuka, is one of the most iconic songs to come out of Sophiatown.

The renaissance was alive and kicking. Although the atmosphere might have seemed like one big party upon first glance, the fun and glamor of Sophiatown were the results of important cultural production, and its very existence was a big and necessary “F YOU” to the government, who didn’t respond very favorably to the sentiment. As apartheid continued to racially divide South Africa, its laws became even more stringent. Police raids on Sophiatown increased, making it harder for people to maintain the way of life they had bravely architected there. One of the biggest blows to Sophiatown’s culture was the passage of the Separate Amenities Act, which disallowed nonwhite people from theaters and concert venues. This cut off black performers from the only audiences who were legally allowed to see live music and made it impossible for them to earn money.

After a string of crackdowns like these, the government announced that Sophiatown was to be demolished so that a whites-only suburb could be built. The remaining residents were allocated to their separate living locations, and the black people among them were to be moved to an exclusively black township consisting of cramped four-room houses with no indoor plumbing. Tragically, no one could stop the government from evicting and displacing the town’s citizens for good in 1955, which firmly demonstrated to South Africans who really called the shots once and for all.

In the early 1960s, the scene’s most central figures, including Makeba and Masekela, went into exile. When Makeba tried to return to South Africa for her mother’s funeral after performing in America in 1960, she discovered that the government had canceled her passport, barring her entry. She returned to America, where she went to New York and furthered an international singing career. Masekela left willingly, continuing his own pursuit of worldwide jazz stardom. These two would become strong outside advocates for the rights of South African citizens—one enormous contribution to the cause was Makeba’s condemnation of apartheid in a 1963 speech given to the United Nations. Though Makeba passed in 2008, Masekela, who’s now in his 70s, is still politically active, using his work to spread messages to South African youth that emphasize the importance of taking pride in and preserving their shared heritage.

Later generations of South Africans would make their own protest art, but that practice really all began in Sophiatown. While the residents weren’t super-militant in their defiance of the system; they lived in resistance of it, and their choice in doing so has become a crucial part of our history. South Africans living in Sophiatown were able to lead their lives more meaningfully at a time when people were systemically downtrodden and treated inhumanely, and the ability to exist in relative autonomy gave them their swagger back in a big way. Its music also played a major role in keeping people motivated by giving them an outlet for their collective pain. It was a way to strengthen each other and a necessary distraction from when their load became too heavy; I’m amazed and inspired by the power art gave South Africans during a time where they couldn’t find it anywhere else around them.

So many things are beautiful about the story of Sophiatown, but what’s most striking about it to me is how a community of rebellious young people trying to live out the fantasy lives they saw in movies built the foundation of black music and theater in South Africa. Although I can only visit Sophiatown in old photographs now, the eternal coolness, creativity, and bravery of its people ensure that its magic will live on forever. ♦