Zits leave annoying dark spots on my face, but I learned how to deal. 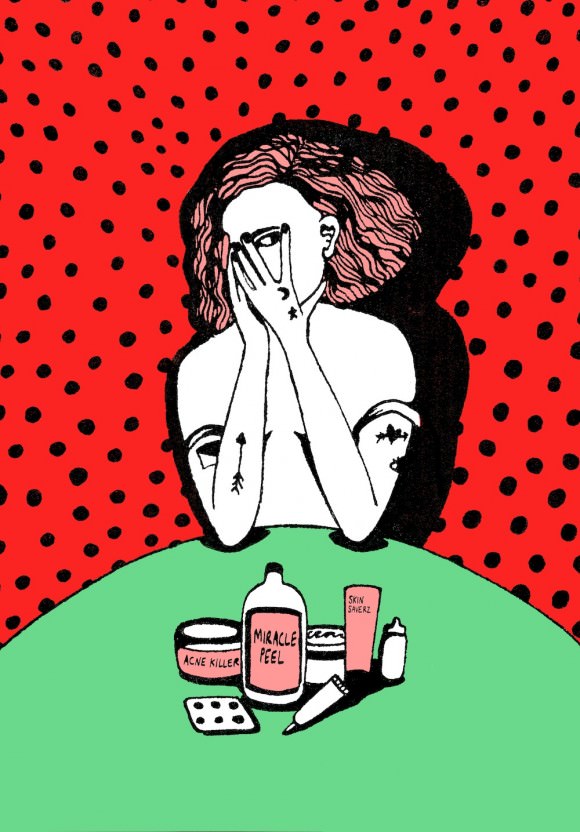 Sometimes my complexion can look—to me, at least—like the painting Sunday Afternoon by Georges Seurat: From a distance its color seems uniform, but on closer inspection you can see that my face is covered with hella dots.

It’s sort of nice to think of my mug, and the dark spots sprinkled across it, as a work of art, but what I actually have going on is postinflammatory hyperpigmentation—a skin condition that for me results from acne, but in general can be caused by other inflammatory conditions like psoriasis, eczema, or wounds. With the possible exception of supercalifragilisticexpialidocious, there really is no string of syllables more fun to say or sing aloud than postinflammatory hyperpigmentation (go ahead, try it—I assure you, it’s a good time), but dealing with PIH is considerably less amusing.

Nearly every pimple I get leaves a dark, spot behind—an obnoxious memento of the week or so that zit and I spent together. The discoloration is caused by an overproduction of melanin, which is what gives skin its color. The marks aren’t permanent, and they’re not painful. That doesn’t sound so bad, right? In my experience, it isn’t—for the most part. But just because a situation is temporary, doesn’t mean that it’s brief. The inescapable reality of PIH is that it can take an incredibly, irritatingly, disrespectfully long time to heal.

For some people, PIH can take years to fade. If it’s a particularly dark mark, it can, speaking from experience, take longer than two years. (Things that could have been accomplishable while I’ve waited for a single spot to disappear: completing a master’s degree, carrying two back-to-back pregnancies to term, watching the extended version of the entire Lord of the Rings trilogy more than 1,000 times.) I have mild but persistent acne, so my spots accumulate over time. There have been points at which old and new spots have merged together, forming alliances and creating larger, nigh-invulnerable units on my cheeks and chin.

When I first started struggling with PIH about eight years ago, information on how to tackle it just didn’t seem readily available outside a dermatologist’s office. Maybe that was because it isn’t, or isn’t thought to be, a “universal” skin condition in the same way acne is. Though it’s common to end up with some kind of mark after a pimple heals, darker-skinned people like myself are more likely to have PIH than those with fairer skin.

But honestly, at that point in time, I didn’t even know that what I had was PIH. I thought the spots were flat, brown, stubborn zits, and my confusion about what was happening to my complexion was what was so distressing at first. Would the spots get bigger? Darker? And, most important, would they ever go away?

I visited a dermatologist who told me that the marks were PIH caused by acne and prescribed a topical cream as a kind of preemptive mode of attack to treat the zits. But even understanding what causes the marks, and that there is so much more to me than my complexion, and that obsessing over every perceived flaw on my face is a waste of energy, and that makeup exists, having PIH or acne or really any skin condition can sometimes obliterate my (or anyone’s) self-esteem. So in addition to using the gel my dermatologist prescribed, I worked diligently—and at first, recklessly—to find even more remedies for my predicament.

Since then, I’ve learned a thing or two about how to manage these stubborn marks. Here are some things I’ve tried, with varied success, so you at least won’t have to make the same mistakes I did. Just keep in mind that nothing I lay out here is the final word on PIH. If you have PIH and it bothers you like it bothered me and you want help making it go away: See a dermatologist. It was the single most helpful thing I tried. But in the meantime, some things you should know:

What Not to Try
The first self-devised, super-unscientific dark-spot-elimination method I attempted was scrubbing the hell out of my face. When a washcloth didn’t produce satisfying results, I tried one of those rock-hard exfoliating loofahs. I was so fixated on clearing my skin quickly that it never even crossed my mind that washing my face with something that felt like it could have been harvested from the craggiest section of the Great Barrier Reef wasn’t the best idea. This method was effective in that it got rid of the very few dark spots I had back then. But it also scraped off some of the skin surrounding the spots. I ended up with several little oblong cuts that turned into scabs that then turned back into spots that OF COURSE were even darker than the ones I had before.

Next, I tried burning the spots off with benzoyl peroxide—a common ingredient in over-the-counter acne products. Inspired by the memory of a girl I’d known in high school whose face had started peeling (severely) the day after she’d been out in the sun for hours while wearing a prescription acne medication, I dabbed a benzoyl peroxide gel on my problem areas and went to the beach. Even though nothing happened to my spots or my face in general: DO NOT DO THIS. EVER. Instead of being thankful that I didn’t get a debilitating sunburn by ignoring the warning on the back of the gel’s tube to avoid unnecessary sun exposure and to wear sunscreen when using the product, I was upset that I hadn’t immediately shed like 10 layers of skin.

The sort of logic that drove me to dangerously experiment with my face like that is disturbing for me to look back on now. But on the bright side, the same desperation eventually led me to my dermatologist’s office and to acne message boards, where I learned more-responsible and -effective ways of treating PIH.

Prevention
Preventing acne breakouts—the cause of the sort of PIH I’ve been talking about—is the only way to break the hyperpigmentation cycle for good. I guest that’s kind of a no-brainer. But let’s just assume you’ve tried everything when it comes to treating your acne, including seeing a dermatologist, and pimples are just an inevitable part of your life.

The minute you feel a new pimple brewing under the surface of your skin, use a spot treatment. There are billions of them at drug stores, beauty counters, and health stores, but I like to use aspirin. (I drip a little bit of water on an uncoated aspirin tablet and dab it on my pimple after it starts to dissolve and turns into a paste.) This or any other spot treatment won’t necessarily stop a pimple from emerging, but I’ve found that a lot of times early intervention will decrease the size of the eventual zit as well as its healing time. I’m not a scientist, but from my own observations on my skin, the smaller and lighter a zit is, the quicker the subsequent spot fades.

Short-Term Solutions
If the pimple pops, I give the resulting wound a day or two to heal before applying a slightly smaller-than-pea-size blob of 10% glycolic acid cream or lotion on top of it. Glycolic acid is a water-soluble alpha hydroxy acid derived from plants. Applying it early in the life cycle of a hyperpigmentation spot has helped make mine lighter.

Even though it’s widely available (you can find it in products at Sephora and other beauty stores), it’s powerful stuff, so use it with caution. Test it on an inconspicuous patch of skin, like on your arm, before putting it on your face. If you have sensitive skin, talk to a dermatologist first about using it, period. It increases sun sensitivity, so apply it before you go to bed or at least avoid the sun when you have it on. It can also be irritating, so be careful about using it for more than two or three days in a row.

Some people use hydroquinone—a strong lightening agent that actually bleaches skin—to treat PIH. I’ve never tried it. Some of the product warnings attached to it (it contains carcinogens and over time may turn skin a blue-black color) make me nervous, and I would even consider using it without consulting a doctor first.

Long-Term Solutions
Gentle and consistent exfoliation is probably the most basic way to manage hyperpigmentation, but it takes commitment. Over time, you’re gradually sloughing off the top layers of your skin. I use an acne-preventing facial scrub like this one* twice a day (morning and night) and a facial peel similar to this one once a week (these peels are crazy expensive, so if your mom/dad/person who loves you unconditionally and won’t get mad at you for borrowing their stuff already has a jar or tube in their medicine cabinet, use it).

After I’ve washed my face, I put on a moisturizing cream that is specifically formulated to even out skin tone (and that doesn’t have any hydroquinone). The most effective creams I’ve used were all oil free and contained either soy or vitamin C, but that’s just me. You might need to experiment with different brands, so see if you can get your hands on some samples before you commit to buying a whole bottle of something.

A broad-spectrum sunscreen every day is crucial, even if you have dark skin like I do and even on overcast days. I always thought that I didn’t need to wear it, but any long-term sun exposure can actually make hyperpigmentation worse and reverse all of that good work.

Even though I habitually following this regimen, occasionally I’ll have setbacks—moderate acne flare-ups that of course mean moderate PIH flare-ups. When that happens it’s hard not to look in the mirror, stare at the conglomeration of spots on my cheeks, and get frustrated. Will their tyranny never end?! But there are also times when I notice the subtle fading of a spot that had seemed especially obstinate and feel triumphant. It’s that slow build to victory that makes the process so annoying but also so, so satisfying. ♦

* I’ve included links to products that have specifically contributed to diminishing my own PIH, but they may not be as effective for other people.