One of our fairy godmothers tells us about her current obsessions.

Hands Across the World 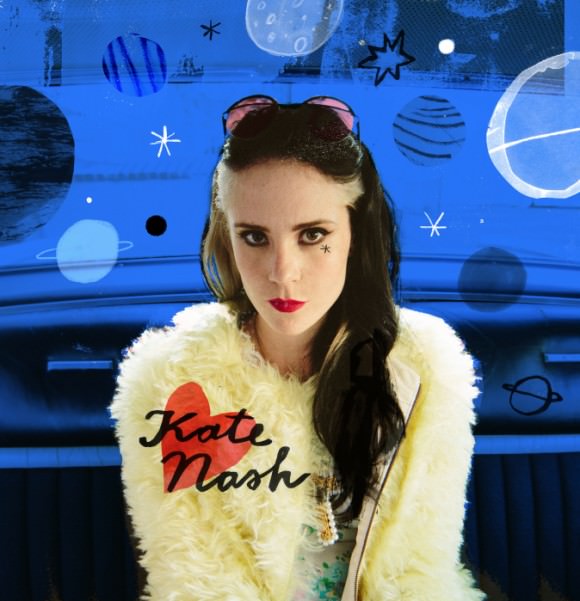 Collage by Marjainez, from a photo by Alice Baxley. All illustrations below by Marjainez.

Rookie fairy godmother Kate Nash has been awfully busy. She just wrapped up a U.S. tour, stars in the new British film Powder Room, and is currently working on a musical. Her new EP, Have Faith With Kate Nash, is out just in time for Christmas. Here’s the first single, “I Hate You This Christmas.”

She recently shared with us some of her latest obsessions of the musical, celestial, and cinematic varieties.

1. Outer space. I’m completely obsessed right now with space and aliens. I’ve been reading the Canadian astronaut Chris Hadfield’s book, An Astronaut’s Guide to Life on Earth, which is a really nice read, extremely inspiring. Chris is so passionate and down-to-earth, and he has a way of making astronomy fun and approachable to all. If you haven’t seen the videos he posted from the International Space Station earlier this year, please stop reading this right now and go watch them. Here’s a sample:

He stopped in London on his book tour last week, and of course I went. When it was my turn to get my book signed, I totally fangirled out! My legs turned to jelly, I blushed bright red, and I could barely get a word out. He is just such a hero to me. I’ve even written a song for him—I haven’t recorded it yet, but as soon as I do I’ll let you guys know!

In the wee hours I get sucked into a YouTube black hole and start getting paranoid about UFO sightings, aliens, government corruption, the Illuminati, social/mind control via the internet (I’m making an effort to spend less time online, as I think the negative aspects of the internet are overtaking the positive ones for me right now), reality TV, and badly produced music. Oh, and time travel and black holes.

Once I’ve really freaked myself out, I finish off with Carl Sagan’s Cosmos. Here’s a favorite bit of mine—prepare to cry and feel insignificant yet warm and hopeful:

2. Alice Baxley. Alice Baxley is my favorite photographer. She loves music—she started out photographing her brother’s band, FIDLAR, and still focuses on concert and band photography. Being photographed by her is a lovely experience—she has this ability to make you feel completely comfortable instantly, perhaps because she herself is totally uninhibited. She is the coolest girl you’d ever want to meet, and I’m lucky to call her a friend. Stare at her beautiful pictures on Tumblr, Instagram, and Twitter and crush out on her with me.

3. D Wing. D Wing is a mystery. He has just two tracks and one video (featuring Brandon from FIDLAR) up on his Soundcloud, but if you like simple R&B, they will leave you hungry for more. D Wing’s music is extremely simple and catchy but has a dark undertone—you get the feeling something happened to him that left a bad taste in his mouth, and he’s trying to do something positive with it.

4. Blue Is the Warmest Color. No movie comes closer to the reality of young love than this one. The relationship between the two young lovers at the center of the story, Emma (Léa Seydoux) and Adèle (Adèle Exarchopolous), feels completely real: It starts out pure, exciting, and innocent, and quickly becomes a power struggle that results in heartache and misery. Seydoux and Exarchopoulos are beautifully powerful throughout, exposing their characters’ depth and humility. The sex scenes are long, and they feel real.

5. Girl bands. I’ve spent the whole of 2013 on the road, and I’ve made an effort to make sure that every band that opens for me is a girl band—or, at the very least, fronted by a woman. My own band is all-female, and it’s important to me to show the girls who come to my shows examples of women being awesome onstage, playing their instruments, owning it. I want all those girls to leave our shows thinking, I could do that.

My favorite all-girl or female-fronted acts right now are:

• The Tuts: Riotous girls from England who want to change the world—very loudly.
• Peach Kelli Pop: She will take you from the West Coast, where she lives, straight to Dreamsville.
• La Sera: The solo project of Vivian Girls’ Katy Goodman, who has the best hair on the planet, P.S.
• Skating Polly: Kelli Mayo and Peyton Bighorse are teenage stepsisters from Oklahoma who will blow your mind.
• Emmy the Great: Her songs are sweet, cheeky, and clever.
• The Aquadolls: Surf-punk mermaids from L.A.
• Potty Mouth: Four badass girls from Boston. Check out their record, Hell Bent, and dream of being part of their crew.
• Vulkano: Two girls and a guy from Sweden. They make weird electronic music with great pop melodies; listen and you will want to throw away your possessions and run away with them. ♦