AMY ROSE: “XO” is how I feel about everyone that I even remotely like.

DANIELLE: The video wrecked me, unexpectedly—like, why am I crying at someone having fun at Coney Island?! But she’s so generous, and it’s clear how important it is for her to be a real person in that moment. It’s so genuine. Like, she accepts love and gives love, all in a way that makes her more capable of doing her work. It isn’t a distraction, it’s an enhancement. But what really ruined my mascara was seeing a carefree black girl, because we so rarely do.

GABI: I’ve always loved Bey, but her vocals on this album have definitely evolved in terms of tone and emotion, especially on “XO” and “Blue.”
11. “FLAWLESS”

DANIELLE: “Flawless” is the perfect anthem—she’s fully recognizing that she is at the top of her game and deserves massive respect, but also telling people to GET ON HER LEVEL. She’s definitely reaching back and pulling people up as she goes by, inciting them to feel their own power.

JAMIA: My first thought after hearing some of the lyrics was that Sun Tzu, who wrote The Art of War, would be really proud of Beyoncé for her warrior strategy. He wrote that one mark of a great soldier is that he fights on his own terms or not at all. He also said that the greatest victory is one that requires no battle.

GABI: I love “Flawless” so much. Bey has been one of the few people on her level in the industry who have consistently been humble and kind to everyone, and I feel like she just needed to have a moment to be like I AM THE FUCKING SHIT and acknowledge that she is a queen and was doing big things before most (all?) of the other big female pop stars right now were even on the scene. Including that sample from Chimamanda Ngozi Adichie’s TED Talk about how it can be a good thing to be competitive in career/accomplishments makes so much sense in this context.

We teach girls to shrink themselves, to make themselves smaller. We say to girls: “You can have ambition, but not too much. You should aim to be successful, but not too successful—otherwise, you will threaten the man.” Because I am female, I am expected to aspire to marriage. I am expected to make my life choices always keeping in mind that marriage is most important. Now, marriage can be a source of joy and love and mutual support. But why do we teach girls to aspire to marriage and we don’t teach boys the same? We raise girls to see each other as competitors, not for jobs or for accomplishments—which I think can be a good thing—but for the attention of men. We teach girls that they cannot be sexual beings in the way that boys are. Feminist: a person who believes in the social, political, and economic equality of the sexes.
—Chimamanda Ngozi Adichie at TEDxEuston, 2012, and sampled in “Flawless”

TAVI: I love imagining Beyoncé watching that TED talk and being like, “I should put this in a song.” In one of the interviews she released she said she was just scrolling through YouTube videos on feminism. I love envisioning it as an example of how accessible information on feminism can now be outside of, like, academia.

JAMIA: Yes! And using her power and platform to leverage someone else’s very important message in solidarity.

TAVI: It’s important to note that she is moshing while this all goes down. 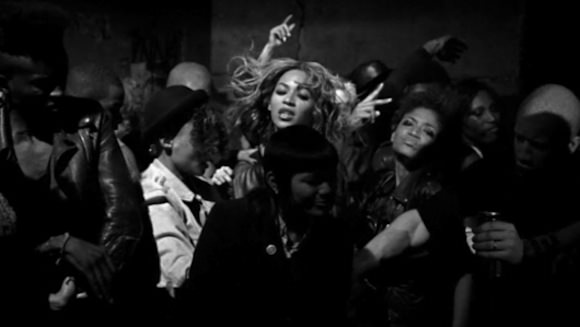 JULIANNE: It’s so good that she put that sample in this song, especially considering how many people were using “Bow Down” to discount her, which really so many corpowhitefeminists REALLY SEEM INVESTED IN DOING for whatever weird fucking grody reason.

DANIELLE: I’ve felt deeply alienated by feminism lately, and trying to work out why I feel that way. A lot of it is that before anything, I’m a black woman, so I go into feminism already racialized and somewhat on the outside. But this album has REINVIGORATED ME.

JULIANNE: OMG ME TOO, DANIELLE. I HAVE BEEN FEELING SO BAD about feminism (mostly because #whitefeminism) but Beyoncé just WIG-SNATCHED the term/concept from the people who would exclude her from it. Like, it’s hers now. SHE IS SUCH A BOSS.

DANIELLE: It’s so important that she is not just talking about feminism on this album, but black feminism specifically. Her race informs and enhances her feminism. Black women are the most undervalued population in our culture in so many ways, and it’s so, so important to me that this feminist message is being heard by black girls, too.

LAIA: Wait—white feminists hate Beyoncé? Is that a thing?

JULIANNE: There’s always been a white-feminist resistance to Beyoncé-as-feminist-icon, but it especially exploded after the Super Bowl, and then again after she began talking about feminism (see also: the GQ cover story that portrayed her as a maniacal robot). Also, when Ms. put her on the cover, so many white feminists went HAM in the comments, like “SHE DRESSES LIKE A HOOKER, SHE IS NOT FEMINIST.”

DANIELLE: The author of that Ms. piece wrote about some of the fallout here. It’s interesting that some of the same people who were calling her out for not being a feminist in June are now totally on board and trying to claim her as their own feminist prize or something. She was saying the same thing back then, which was basically “I do feminism on my own terms.”

JULIANNE: Here are a few examples where you can see the double standard: from the Guardian and The Grio.

The worst thing about that GQ article is that a woman wrote it. I fully believe that if one of their male staff (at least the dudes on the staff who are my friends and have #feministconcerns) had written it, it would have been less condescending. The best things about it were: (1) It revealed that she keeps an “official Beyoncé archive” (feminist archiving, y’all), and (2) she said the sentence that has become my life motto: “I am more powerful than my mind can even digest.”