GABI: FUCK YES TO THESE GORGEOUS BLACK WOMEN ALL WORKING TOGETHER.

HAZEL: “Partition” is flawless. The mirror dance, that lavish mansion—it’s all so beautiful. Also, just from a fashion perspective, the clothes/lingerie are incredible. What is that lacy cape thing she opens up on the piano?! WHERE CAN I GET THAT? 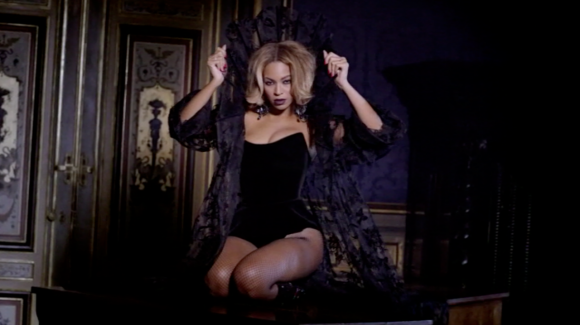 ARABELLE: That lacy cape is Thierry Mugler 1995 haute couture. Here is a picture of it from the runway.

JULIANNE: Arabelle, you are a boss.

TAVI: That napkin drop while she has tea at like VERSAILLES is just one example among many from this album where she turns racial power dynamics around so that she is the one in power.

JAMIA: I love the French lines in “Partition.” Translation: “Do you like sex? I’m talking about physical activity, the coitus, do you love that? Men think feminists hate sex. It’s a natural activity that women adore.” That gave me chills. I love that she is taking ownership of her sexuality when some of her critics have been challenging her agency and objectifying her body for too long. She’s owning and embracing sexuality and pleasure. I LOVE IT.
7. “JEALOUS”

JULIANNE: She co-directed this video as well as “Rocket,” and has sole director credit on “Heaven.”

JAMIA: I’m so moved by her vulnerability. Making this must have been so cathartic and painful.

TAVI: Yes! It’s so intense and honest, and it is amazing that she can share that, but it has no vibe of gossip-blog fodder because you also just watched the “Drunk in Love” video, so you know their love is the realest and you’re also just like, Oh wow, I cannot assign any meaning to any of this beyond what she says is there, so I will accept “Jealous” as beautiful self-expression and respect that and fuck any speculation as to what it means about their personal lives.

DANIELLE: It’s sort of revolutionary that she’s squashed speculation before it could even start. Like, she’s going to ask and answer her own questions about her life, thank you. She is laying out her entire life on her own terms, but still holding her privacy.

TAVI: The whole album has this energy of, like, she just knows what is important to her and doesn’t have time for BS and it is thrilling to think of ever being in that place (being a teenager has never felt like being in that place). In this video she says something about looking in the mirror and going “I’ve still got it”—and it’s like, SHE’S “STILL” GOT IT? I FEEL LIKE THIS IS ONLY A NEW BEGINNING. And to hear BEYONCÉ singing about feeling jealous was like, OK, so this really is something everyone feels—OK.
8. “ROCKET”

TAVI: Consider “Drunk in Love” vs. “Rocket” vs. “Partition”—she’s showing so many kinds of SEXUALE DESIRE. That’s another annoying thing about people’s complaint that she “sexualizes herself”—“Rocket” is so beautiful, and the lyrics of the explicit version of the song go on to be like, “We’re so much more than Instagrams” (number of Instagram refs on the album: two), and I feel like you can’t simply say she’s just selling sex or whatever when it’s all part of this self-portrait of who she is as a wife, a mom, a friend (especially in female friendships), an artist, a public figure, etc. It’s incredibly personal for her and how she sees herself, which she expresses here. And if she IS “selling sex,” it’s not up to anyone else to give her shit for it, and it feels especially UGH for white feminists to insist that a woman of color cover up and stop letting everyone know that she’s hot and beautiful. Or to insist that she sing less about relationships when it’s clearly a big part of her life. Honestly, those are usually the songs a lot of people want to hear and relate to, and I’m just thankful we get them from someone who delivers them through a lens of ultimate independence and self-assurance.

JAMIA: Her life has centered on a series of relationships between bandmates, tour mates, family (her sister also being a performer), and her business ventures with her mom and her husband, and all of those things are rooted in personal ties and connections and the things that emerge are inherently human. She’s letting us know, “I may be rich and famous and otherworldly, but I share your values, needs, and cravings for connection, support, solidarity, etc.”

TAVI: I think it’s also important to note that this album is about so many kinds of love. In “XO” she is singing about love with one person, but in the video she is surrounded by people at like a Coney Island love fest, dancing with everyone, making everyone so fucking happy. Or the first line in “Superpower” about how feeling her palms together is different from feeling her hand in someone else’s hand, how that’s a different kind of power—it reminded me of this one time when my boyfriend and I were having a rough patch and I was walking outside in the summer and felt this huge gust of wind and it felt, legit, like a HUG. And I thought, and probably wrote in my diary, The world is hugging me! She covers spouse love, mom love, friendship love, self love, world love—it’s so inspiring, my god.
9. “MINE”

HAZEL: “Mine” is her homage to ARTSY FARTSINESS with her playing Pieta, and then there’s a reference to The Lovers by Magritte, and the group dancing on the beach feels super Pina Bausch. Compare all of that to Lady Gaga just being like “I AM A KOONS.”

TAVI: I get what Gaga is trying to do with all the ARTPOP stuff and asking people to take pop music seriously, but I feel that it’s more effective to make something that demands to be taken seriously for its quality and not because you’re like, “I’m on the red carpet at the AMAs on a giant fake horse, clearly I am an artist.” Though I would like to include a disclaimer that I am not pitting them against each other just because they are both women. They have done songs and videos together—they are obviously not enemies. But with all of December’s “year in music” stuff and considering that the past two months alone have brought us new albums from Miley, Katy, Gaga, and Britney, it’s impossible to consider Beyoncé’s album in the ~pop music landscape~ without also looking at what else has dominated it and forced people who don’t even care about it to pay attention (see Miley, who was almost named Time’s Person of the Year).

JULIANNE: On a different note, people were pissed about Beyoncé naming her tour “The Mrs. Carter Show” and about how much she talks about how she loves her husband in her documentary, but as explained here, that stuff is important. It is really reinforcing of black love/marriage, which some people reduce to “just his little wife” but which actually has real-world implications, such as the financial stability marriage provides, especially considering that single black women are on the lowest rung of the income gap and earn less income statistically than any other group in America. WHICH MAKES BEING MARRIED A FEMINIST ISSUE. And “Mine” reflects that.