HAZEL: This is one of my favorites. When I first heard it I was like, Oh, this is Anita Ward’s “Ring My Bell”!

TAVI: I love seeing Solange in there, and the VIBEZZZ are just killer. And the lyrics! I feel like we so rarely hear about female pleasure like this. I mean, movies will get an NC-17 rating for oral sex performed on a woman but stay PG-13 for oral sex performed on a man. Plus, the song is called “Blow,” so I wasn’t expecting it. Last thing: My heart does a dance when she gets to “I can’t waaaaiiit till.” NO, LAST THING: AIR GUITAR. 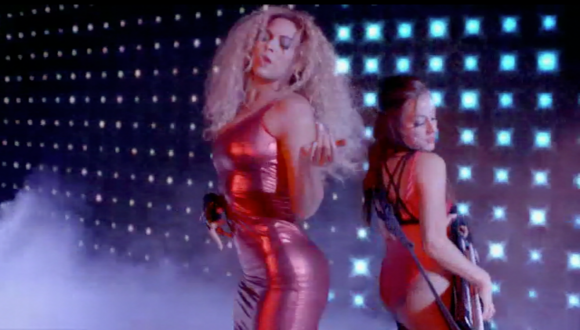 JAMIA: It is interesting to see some of the critiques of “Blow” and “Drunk in Love” because some parents view the content as “pornographic.” I get a sense that a lot of this critique stems from judgment and shaming because Beyoncé is a mother, which is supposed to make her a different kind of “role model.”

HAZEL: Do people actually know what pornography is? I’m tired of people using the term pornographic for things that are not unsimulated sexual acts created for the viewer to get off to. It’s a really sensationalist way of describing sexual expression that is actually pretty tame, especially in terms of pop music videos.

ANAHEED: I mean, on one hand, we live in a patriarchy, and there’s no getting around the fact that in many arenas, a woman will be more successful if she plays up her attractiveness to men. That’s unfortunate and unavoidable. But on the other hand, does that mean we’re supposed to deny that big, important, and not shameful or traitorous part of ourselves and our lives to be “good feminists”? Does being a feminist mean taking no pleasure in your sexuality and never (god forbid!) profiting from it? There’s really no winning here, and that’s where the conversation should START. Being a woman is a trap, full stop, but especially if you’re a very successful woman in the public eye. I think Bey has really found the only way to maybe not avoid the trap, but avoid getting mangled by it: She expresses her sexuality in the context of her own life, which she lives strictly on her terms. There’s sex in her music, her dancing, and her performances, because sex is part of life, and she is an alive person. I don’t see how it’s cool or smart or “feminist” to dog on women for using the system to their own advantage, or for taking pleasure in something that happens to also sell. And there’s something especially gross about scolding a black woman for being too bodily, for taking too much pleasure from her sexuality. Like she’s a sinner or something. And like she should remember her “place” and be “modest.” I thank the heavens that Beyoncé has never been modest about her greatness on all levels, because she is a gift to all of us.

JAMIA: Yes! Beyoncé is in charge, and that is the part I don’t think some of the critics get—she’s driving her own image and her own body and it isn’t up to us to police her.

TAVI: It’s so lazy and out of context to fixate on the songs about sex and say that’s all she’s about when this is an album of many songs and videos about LIFE. She didn’t release these videos individually and over time like people normally do, because it should all be considered part of ONE PACKAGE. You cannot get mad that she sings “I just wanna be the girl you like” on “Partition” and not acknowledge the first lines of “Superpower” [“When the palm of my two hands hold each other, that feels different from when your hands are in mine”]. These aren’t “singles.” This is a self-titled, fully fleshed out work, released as a whole. To be simplistic about it does it a disservice. I guess some people would accuse her of trying to have it both ways or whatever, as though “Blow” invalidates the message of “Flawless” or something—but why are we denying her a right to explore her own complexity? She isn’t saying women HAVE to be all things, she is saying they CAN be if that’s who they are, just like her.

GABI: That’s my favorite thing about the album—just the fact that she’s showing that it’s OK for women to have all of these different sides to them, from feeling like a bad bitch to feeling insecure to feeling super sexy and even having names for each, e.g., Beyoncé/Yoncé/Peaches, etc.

GABI: This is a favorite song of mine. It reminds me so much of my relationship. I love that she talks about falling more in love with someone after you realize they may not be the person you were putting on a pedestal—they’re actually super flawed, but once you accept you’re both works in progress, your love reaches a new level.

TAVI: Totally. “I love you even more than who I thought you were before” and “Know I’m not the girl you thought you knew and that you wanted / Underneath the pretty face is something complicated / I come with a side of trouble / But I know that’s why you’re staying.” That applies to the whole album?

GABI: Yeah! She’s in gritty Houston in the vid, and I think that plays into those lyrics. Like, she may be a big superstar and seem perfect, but at the end of the day she’s a flawed girl from Houston and not some Hollywood-raised robot. I think so many famous people get to her level of success and kind of reject or make fun of their upbringing, but she has always been so proud to rep hers.