Friday Playlist: Hopelessly Devoted to You

Have you ever been head-over-heels, wildly obsessed with a movie star, singer, or other famous love object? When I was a tween, I went with my BFF to see an R&B group we loved in concert. We made giant posters proclaiming our feelings for these hunks, and I decided to write my phone number on the back of one—just in case, you know, they wanted to get lunch or personally SERENADE ME one day. When I lifted up the poster for the boys to see from the stage, everyone behind me laughed. I didn’t care, though, because those digits were just proof of my devotion. I think these fashionable fangirls of the big screen would totally understand. 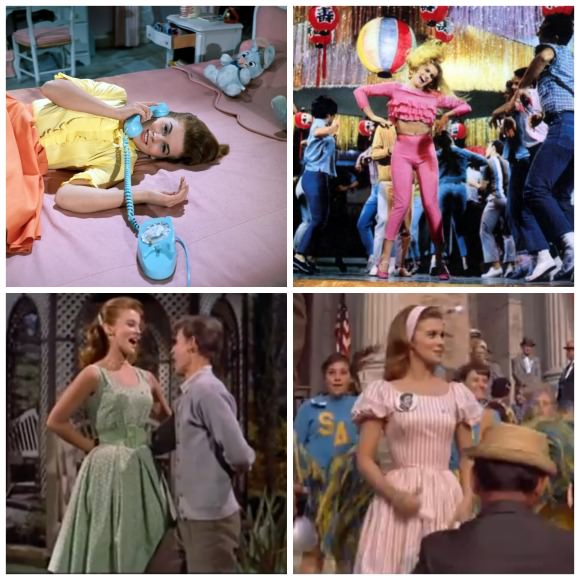 Bye Bye Birdie (1963) takes place in a town called Sweet Apple, where the teen heartthrob rock & roll singer Conrad Birdie is about to give his last performance before leaving for the Army. The movie was actually inspired by Elvis Presley’s real-life Army stint. You guys, imagine if there were still a draft and the Biebz had to leave the stage and enlist? I know he’s Canadian and all… but JUST IMAGINE. For Birdie’s last concert, a girl named Kim (Ann-Margret) is chosen as the lucky receiver of his farewell smooch. (This makes Hugo, Kim’s steady BF, HELLA JELZ.) Through the whole movie Kim wears the loveliest outfits, including a pink ruffled crop-top with matching pants and a closetful of colorful dresses. Pay tribute to her and this super cute “Telephone Hour” scene by putting on a pretty ’60s-style dress of your own and sporting some phone-shaped accessories. 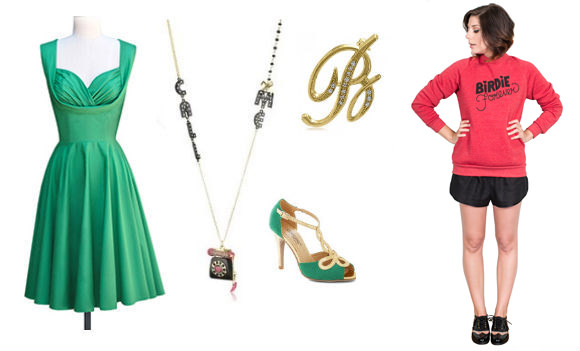 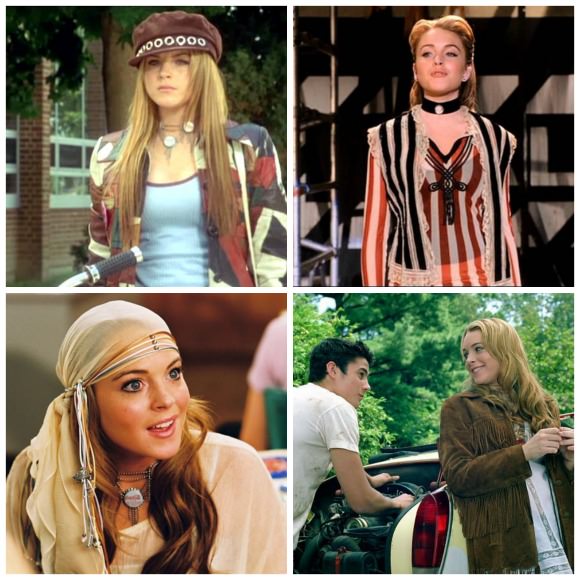 Confessions of a Teenage Drama Queen (2004) stars Lindsay Lohan as Lola, a teenager who dreams of becoming a famous Broadway actress. Lola and her family move to a new town, where she becomes friends with a girl named Ella at school. Both girls are hardcore fans of the rock group Sidarthur. One night when the band is having a concert, the girls try sneaking in. They don’t succeed, but they still end up meeting the lead singer, Stu Wolff. STU WOLFF, what a name! Lola’s fashionz in the movie all have this sort of cool, boho vibe. Mimic her style by wearing fringe anywhere you can. You can get a bottle-cap necklace just like hers on Etsy, but I think it could be a pretty cool DIY, especially if you drink a lot of soda. 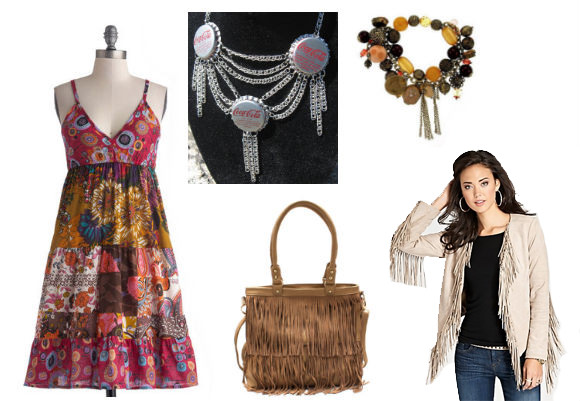 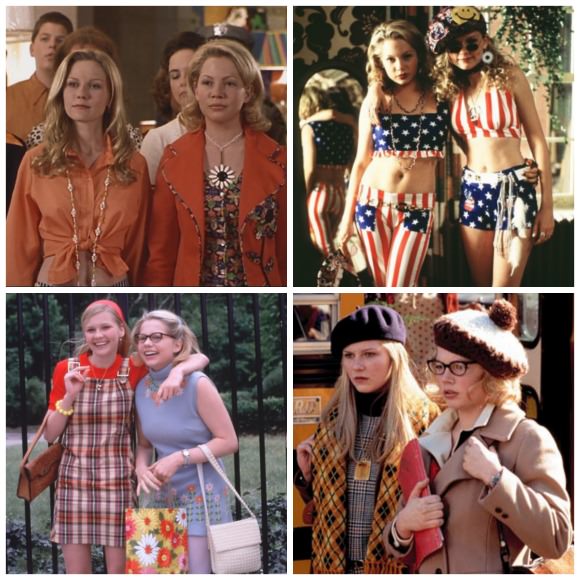 Dick (1999) is about two BFFs, Betsy (Kirsten Dunst) and Arlene (Michelle Williams), who become part of President Nixon’s inner circle after wandering away from the rest of their class on a field trip to the White House. Arlene is obsessed with the singer Bobby Sherman, but after a while focuses her girlish longing on the prez. Following a series of hijinks, including getting the president super stoned, the girls become involved in the infamous Watergate scandal that destroyed Nixon’s presidency! For a couple of accidental politicos, these two have unbelievable style. I have to give major props to Deborah Everton, the costume designer behind all of these fabulous ’70s looks. I especially love when the girls dress up in head-to-toe American flag–themed outfits. Don’t wait for the Fourth of July to do the same: Show off your own star-spangled style any day of the year. 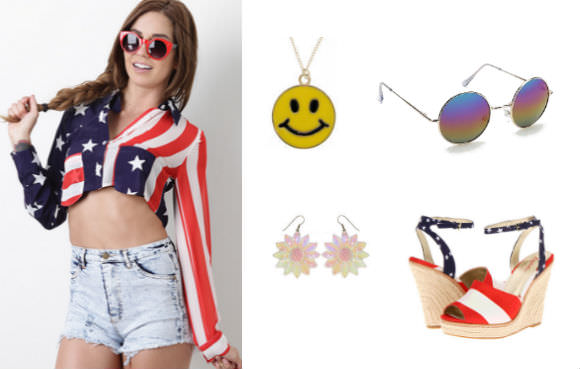 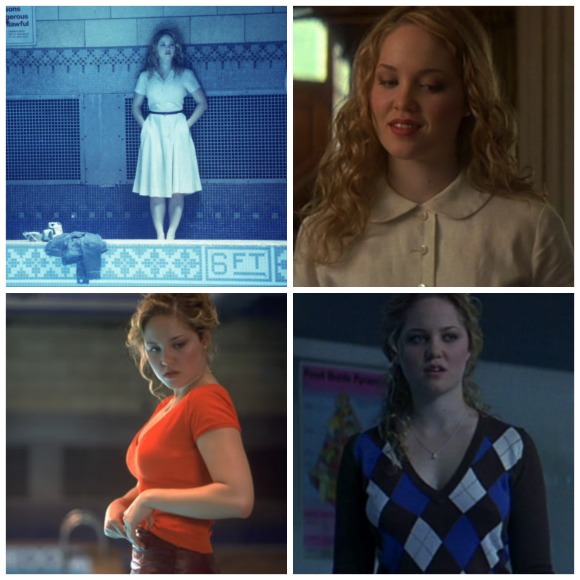 In Swimfan (2002), we witness ~the dark side of fangirling~ when a high school swimming star, Ben (Jesse Bradford), meets a girl named Madison (Erika Christensen). The two become close friends, and Madison seduces Ben (in the pool!) even though he has a girlfriend. ESCÁNDALO! Madison becomes Ben’s number-one fan (aka stalker) and sends him a million emails (all signed “Swimfan”). She even befriends his poor GF! Even though she scares me, Madison has some pretty cute outfits. I especially like her Peter Pan–collar blouse and musical-note hairpin—the latter of which, SPOILER ALERT, Ben uses to pick her locker when she can’t get it open. Get inspired (but not TOO inspired) by her pathological style and wear a dainty dress with your own musical accessories. 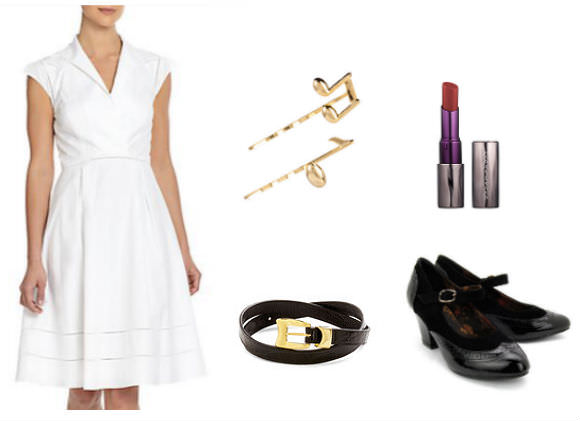