A roomful of beginners wouldn’t judge me—would they? 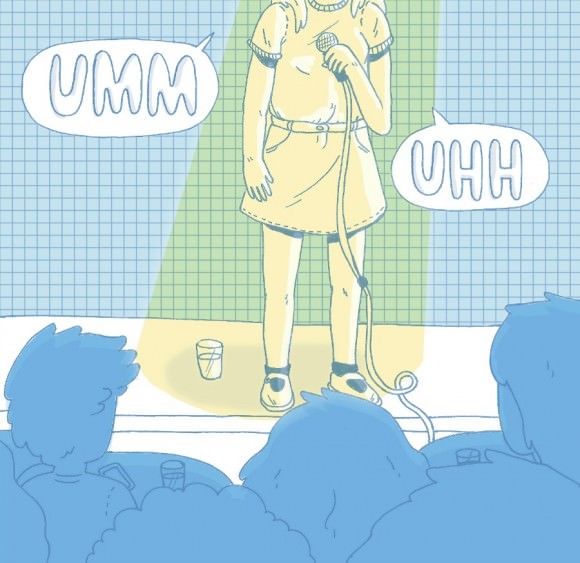 Every comedian has at least one shining jewel of a story about a time they horribly failed. My personal favorite is Nick Kroll’s: He was about to go onstage at an open mic, and was told that Bill Murray in the building. Kroll got up the nerve to approach Bill Murray and ask him to watch his set, and Bill Murray said fine. Kroll had only been performing stand-up for about six months, and when he got onstage, he totally froze. “I couldn’t say a word,” he recalls in this video. “It was really bad. […] It was just a perfect storm of hubris and inexperience.”

Aspiring comedians hear these stories almost every day. Part of us relishes them, because they show that even the greats were once beginners. But these stories also embed within us a mortal fear of bombing. Then there’s the fear of being nothing but a huge cliché: Everyone thinks they’re funny, and in New York City, everyone thinks they’re funny. When I’m waiting in line for a comedy show, I always hear the people around me talking about their new web series that is “going online tomorrow, it’s a parody of Teenage Mutant Ninja Turtles but with the cast of Seinfeld!” And the person they are talking to sort of smiles and nods, not really listening, and tells them about their new video: “It’s Obama giving a speech to Congress, but all the congressmen are turtles!” How do I know I don’t sound like that to other people?

I met lots of people with big dreams and mediocre material when I moved to New York a few years ago and started taking improv classes at the Upright Citizens Brigade. I’d been a big fan of the UCB’s television show, and I knew that a lot of comedians I admired (Nick Kroll, Aubrey Plaza, Ben Schwartz, etc. etc.) had started there. I loved learning and performing improv immediately. Then a couple of my improv friends started telling me about performing at open mics, and I started thinking about trying stand-up comedy.

An open mic is a live show where pretty much anyone off the street can get onstage and perform. You can’t get good at stand-up without practice, but you can’t get booked as a comedian until you’re good, so open mics are a rite of passage for almost all beginning comedians. My friends who’d done them said they were really fun, and since I was already curious about stand-up, I figured, why not? Everyone else there would be a beginner like me, I reasoned, so no one could really judge me. I might as well try, right?

Cut to many months later. I haven’t gotten close to even approaching a microphone. I start each day promising myself that today I will sit down and actually write some actual jokes. Then, for inspiration, I turn on Sarah Silverman’s special Jesus Is Magic and watch it straight through. That reminds me about the tragically short-lived Sarah Silverman Program, so I binge-watch an entire season. Then I find some of her old interviews on Howard Stern and listen to those. Then—oops—it’s time for bed. Another day well spent on being intimidated by one of my heroes, unable to lift a pen! I tell myself I will never get up on a stage and perform material that I do not feel confident about, and I cannot imagine a time when I will feel confident about my material. So I don’t get up on a stage.

BUT THEN! In the shower one day, inspiration strikes. Something about the combination of warm water and coconut-scented conditioner makes the ol’ brain wheels turn, and within five minutes I have come up with an idea for a set. I’M BRILLIANT! I tell myself. THIS IS THE STUFF THE COMEDY WORLD HAS BEEN WAITING FOR! Now I just need to write it.

A week later, I have fully written an introduction and am about three bullet points into my set. There we go, I tell myself. At this rate, I’ll be open-mic’ing before the month is over! And then the fear sets in: Am I really going to do this? Come on, this is just classic girl-who-thinks-she’s-funny-but-isn’t material. I would heckle me if I saw myself perform that. The bit that killed me in the shower a week ago doesn’t seem funny anymore. But I vow to keep trying.

Time passes…I am about to leave for Argentina for four months. I tell myself that I will use my time away to write a five-minute set, and that when I return to New York, I will get up and perform it. I don’t care where—any place that’ll take me is fine. (There’s a great website called Badslava that lists all of the open mics in almost any city in the U.S.)

Three months later, all I have to show for myself is two more bullet points—they’re not even fully formed jokes, just ideas. My brother comes to visit me in Puerto Rico and asks me how my stand-up set is going. I change the subject and distract him with my new worldly knowledge: In Buenos Aires, blahblahblah-something-that-sounds-cultured, say something quickly in Spanish, crisis averted!

Around this time, I become obsessed with a podcast called Comedy Bang! Bang! Pretty much all of my favorite comedians go on this podcast, either as themselves or as characters, and improvise for an hour or more. Listening to them exercise their quick wits and just be ridiculous and amazing reminds me that comedy is supposed to be fun. I feel more energized than I have for a long time. I take out my notebook and I reread my stuff. Hey—this bit isn’t half bad. I start writing.

Back in New York, I get a job with a nonprofit that takes up all my time. What little is left over I spend taking more improv classes at the UCB, where I’m surrounded by other aspiring comedians, all trying to so the same thing I want to do. Oh, no. There are just so many of us, all fighting for attention, which makes me want hide in a corner somewhere, as far away from comedy as possible. But alas, one day a co-worker tells me a story that is so funny that I want everyone to hear it. It’s about the time he shat his pants and the awful things he did to try to cover it up, and I am crying by the end, and encouraging him to tell it at an open mic. He agrees, if I go with him and do a set. We choose a night to go up, and I am nervous for days. Mostly because I have a lot of faith in his set, and almost none in mine.

The night before, I make some last-minute adjustments to my set. I rewrite my introduction and my closing joke, arguably the two most important elements in a stand-up set. I practice alone in my room, speaking really softly and quickly. I get in bed and am still going over the bit in my head as I fall asleep.

The day of the show, I fidget during work, during class, during the time between class and the show. I want to eat, but I think I will throw up if I try. I meet my co-worker outside, and we walk into the club together. It’s a lot smaller than I imagined; there are about 20 people there for the show (most of them performers waiting to go on). The way this open mic is run gives me a lot of anxiety: The names of all the performers are put into a fish bowl and then drawn out two at a time. So you know when you are on deck to perform, but it’s thrown at you pretty quickly. The other performers seem just as new to comedy as me. One guy can’t stop making sexist jokes that make me angry, and another guy is shyly telling a story I can’t really hear. The audience isn’t really laughing, and I’m getting more and more nervous. I thought an audience of amateurs would be more supportive than this! Finally, my name is drawn and it’s my turn.

The light is really bright, and the top part of the microphone falls off when I pick it up—ha ha I meant to do that! My set starts out slow. The idea is to lull the audience into a false sense of security, and then break into a ridiculous character routine (it involves Moses delivering the Ten Commandments as a stand-up routine—long story!). And I’m doing well! Yay!! I get laughs in the right places, groans in the right places, and when I get silence, it teaches me which parts of the set need to be reworked. I talk a little too quickly, but people seem to like my jokes. When I’m done, people clap, and that makes me feel really good. I sit down and feel breathless in a good way.

My friend gets increasingly drunk as the night goes on, and ends up being the last person up. He decides to do a bit he’s never rehearsed and it goes quite painfully. At least he acknowledges it halfway through the set: “Wow, this is…not going well, is it?” That gets the biggest laugh of his whole set.

After the show, the host comes up and tells me he really liked my bit. I try to keep my cool, but I kind of just blurt out that it was the first time I’ve ever done this, I was so nervous, wow it really means a lot, thank you, I’m still shaking ha ha hahaha let me see myself out thank you again oh sorry for stepping on your foot!

Now I’m working on material for my next open mic. I don’t know if the fear and anxiety will ever go away— seasoned performers from the UCB have told me it takes years to be confident about skills and your material. I have to remember that I am learning. And I look forward to one day having a really horrible bombing story of my own. ♦