Sisterhood Can Be Powerful 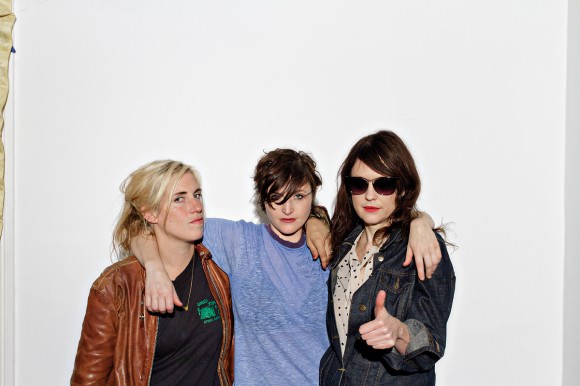 Mary Timony has been a core member of several of the most resonant rock bands of the past two decades, from her short-lived all-girl punk band Autoclave in 1990, then stomping through the ’90s with Helium (while recording a great CD with Carrie Brownstein as the Spells), through a couple of solo years in the early naughts, to playing guitar and singing in the supergroup Wild Flag (currently on hiatus). Now she’s got a new project, a power trio called Ex Hex. They don’t have an album out yet, but they’ve been playing some shows, and they took some time out to record this theme song for us. It’s a cover of a song by Slant 6, the legendary all-girl punk band formed by Timony’s old bandmate Christina Billotte after Autoclave broke up in 1991.

I recently got a chance to talk to Timony about Riot Grrrl, teaching guitar to girls, and overcoming depression, strife, and sexist rock journalists. She’s a role model for lady shredders everywhere. —Paula Mejia

PAULA MEJIA: What was your first instrument?

MARY TIMONY: My brother got a guitar for Christmas one year, and he started playing in a band and writing songs. I thought he was super cool, and I asked him to teach me some chords on guitar and to show me the songs he was writing. I just got completely obsessed with the chords and songs that he taught me, and I played all the time—four or five hours a day. I wanted to be a better guitarist than my brother! I stopped taking viola lessons, got really into rock music, and in 11th grade, after a few years of playing on my own, I transferred to Ellington [a performing-arts high school in Washington, D.C.] to study jazz and classical guitar.

What kind of music did you grow up listening to? Did you have any musical role models?

My brother was really into classic rock, so I learned about the Beatles and the Stones and Brian Eno from him. When I was in high school, I started going to see punk and hardcore shows in D.C. I saw almost every single Fugazi show in D.C. from when they first started playing until I moved away to go to college. I guess that you could say they were my role models.

How did Autoclave form? Were there a lot of women making music in D.C. in the late ’80s and early ’90s?

My first hardcore show was when I was 15. The band was Rites of Spring. At the time, in the ’80s, there was an incredibly vibrant scene of kids in bands putting on shows here. I was so floored by the whole thing—the crazy urgency of the music, and weird-looking audience members with mohawks, shaved heads, ripped jeans, and Doc Martens. I just really felt like I had found my tribe in some way, even though I didn’t really feel like I fit in because I didn’t know anyone. I still went to every show I could, and eventually I met other kids there and made friends with people.

The bands that were playing in D.C. back then were for the most part all guys. There was one band of girls in the scene called Fire Party, and I thought they were totally cool. I met Christina Billotte at a show—it may have been Fugazi—at the Wilson Center. I think I was 17 or 18. She played bass, and she had heard from someone that I played guitar and asked me if I wanted to jam sometime. We had decided that we only wanted to play with other girls, but we really did not know many that played instruments. We got discouraged and stopped jamming for a year. Then one day I got a call from Christina. She had met Melissa Berkoff, who was an amazing drummer, and Kathy Cashel, a great guitarist. We all went to Christina’s parents’ house in Bethesda, Maryland, and played together, and immediately we wrote a song in about five minutes.

There are some people who are talented, who do things a little bit better than average, and then there are those rare people who just do things so much better than most people and come up with ideas that are just so beyond anyone. Christina is a genius. Even at 18, she really had a clear vision for the band. She wanted to make music that sounded different from anything that was happening in D.C. She gave me Pink Flag by Wire and a Blondie record, and I listened to both of those records over and over and over. To this day I have an extreme amount of respect and admiration for her and all she has done in her career as a musician and a visual artist.

I still really love the music that Autoclave made. It doesn’t make me feel squeamish or embarrassed like some other music I made early on does. At the time we were one of only a few bands with female musicians in the D.C. scene.

What was it like to be a musician in D.C. with Riot Grrrl forming around you?

Music scenes then were really regional. Before the internet it was a lot harder to know what kind of music was happening in different cities across the country. I took off to Boston for college, and while I was away, I heard that Bikini Kill had moved to D.C. Some of them moved into the group house where Christina lived in Mount Pleasant. I got to see Bikini Kill and Bratmobile play when I came home to D.C., and I was just totally blown away. I was really influenced by the rawness and energy of their live shows.

Although those two bands were the only bands that were technically considered Riot Grrrl at that time, looking back on it we were all really doing the same thing: We were young girls who wanted to create a different world for ourselves by being in bands. I feel like the Riot Grrrl movement was a reaction to the boys’ club atmosphere of ’80s hardcore and post-punk music. In D.C., the punk scene was pretty political, and being a girl in a band at that time really was a feminist statement. There were not a lot of girls doing it, so simply being in a band was a boldly feminist move.

I read that Helium’s feminist-leaning lyrics scared people, and there was a lot of criticism. How did you overcome that?

I guess I had gotten used to living in an insular music world where there were these feminist bands happening, and I thought female empowerment was a pretty normal thing to talk about and sing about. After Helium made a record and we did press to promote it, I talked about my feminist ideas in interviews a bunch, and I remember my words really getting twisted around by some male rock journalists. I started getting portrayed in articles as this “weird little crazy angry girl.” It made me frustrated. I felt really misunderstood. Luckily, since this was pre-internet, I don’t think those articles by those sexist old dudes exist anymore!

Your work with Wild Flag is so bombastic and confident—what made you want collaborate again after you’d been working as a solo artist for a few years?

When you are a solo artist, you are kind of creating in a vacuum. This can be fun for a little while, but it’s easy to get sort of tapped out and feel like you’ve used up all your ideas. I really missed working as a team. Luckily, it was right about that time that Carrie Brownstein called me up and asked me to jam with her, then we got pretty busy with Wild Flag. Being in Wild Flag has been an incredible experience.

It’s a really empowering thing to be able to express yourself and your ideas. Being in a band is a really active process, and there are so many skills involved, musical and otherwise. And it’s empowering to do something that you truly love to do.

I’ve read that during some of your most productive years, you were depressed. How did you manage to keep making music through all that?

Being a musician is a tough life. I went thought a lot of rough times in my 20s. There were times when I was super broke, eating cans of beans and not being able to keep jobs because of touring, but then not making money on tours. I worked crappy jobs for a long time. Before I found teaching, I was an office temp, a shrink-wrapper in a record warehouse, a telemarketer, a box-packer. But I just really love music, because I could never bring myself to stop playing in bands. I tried for two years before Wild Flag started, but I missed playing so much. Now I know I will always play, and I will never stop. It makes me feel human.

You’ve worked through so many ideas and bands! Is Ex Hex your dream band?

Ex Hex really is kind of a dream band. It’s all about kicking out the jams and playing music just because you love music. Betsy [Wright, the band’s bassist] and Laura [Harris, the drummer] are both such talented musicians. They are so inspiring to me. Betsy was in a band called the Fire Tapes, and is an incredible talent. She plays guitar, piano, and bass, and she’s an amazing singer. I always loved seeing Laura play in her old band, Aquarium, in D.C. She has such a natural and free feel on the drums. I feel really lucky to be playing with both of them, and I’m super stoked about the music we are making.

You’ve been teaching guitar to a lot of young women. What barriers do you see still hindering women and girls from getting involved in music?

I really have some totally amazing students. I love them so much, it’s really so cool to watch them developing into musicians! I think the biggest barrier is just not having the encouragement to get into it. When you are around other people who are musicians and music fans, or if you take lessons, it’s much easier to get started. That’s why the Girls Rock Camps are so great—I really think they are part of the reason there are so many more women playing rock music now than there used to be. It makes me happy. When I was growing up in the ’80s, you felt like more of a weirdo if you were a girl who was into guitar. Now is just so much more normal.

Any advice for young girls interested in pursuing music?

What’s next for you?

Ex Hex is going to be putting out a three-song 7″, and we’ll be touring the East Coast in March. We will have a full-length out sometime in 2014. Looking forward to it! ♦

Paula Mejia is a frequent contributor to SPIN, the Village Voice, and Myspace. She lives in D.C.and tweets here.