Sid also helped me pull the plug on an eight-year relationship that should have ended in half that time. I had been fighting with my live-in boyfriend nonstop for a few days when I noticed that Sid had stopped eating and looked really uncomfortable. The vet told me he was completely constipated, but they couldn’t tell why. But I knew the reason: The poor guy was stressed out from all the fighting. The tense atmosphere at home was making him sick. The boyfriend and I broke up shortly after that. I credit my cat with showing me it was time to stop living in misery, that we both deserved better.

As he got older, Sid started having problems that couldn’t be fixed so easily. When he was 12, he was diagnosed with kidney disease, which is common in aging cats. We were able to manage that with prescription food, but a year and a half later he started puking a lot and was diagnosed with irritable bowel disease, which is much harder to treat. I changed his diet again, put him on medication, and rode out the ups and downs. Last year, the cat who at his fattest had weighed 22 pounds, and at his healthiest 13, had dwindled down to eight pounds, then seven, then six and a half. It was a battle to get him to eat, but he was sweet as ever—sitting on my lap or lying beside me all day while I wrote in my home office. He took a daily cocktail of steroids and appetite stimulants, which my husband, Scott, and I forced down his throat four times a day. At first he resisted the pills so fiercely that my mom, a nurse, had to come over and help, but eventually he got used to it—and, sadly, eventually got too weak to fight us.

In September we noticed that he had started peeing blood. The vet bills started piling up. My mom insisted on helping us pay them. Back in high school, when I was tangled in that abusive relationship, I had hidden the physical signs of my distress—cutting, starving, crying, and getting high—from my parents, but my mother could tell that something was terribly wrong. “I honestly believe Sid saved your life,” she told me through tears when I asked if I could put another $300 on her credit card.

An ultrasound showed that Sid had kidney stones. He bounced back from that, mostly, but after that he was up and down every week, it seemed. Some days he seemed like regular old Sid, active and inquisitive, and other days he’d sleep all day and refuse food. He was already 17 and a half, and as the weeks went on, he had more of the latter kind of day than the former.

I’d spent so much of my life trying to do a million things at once and beating myself up when I couldn’t handle it all. When Sid got really sick, I finally gave myself permission to slow down. I canceled plans with friends and stopped taking on additional freelance work. I also didn’t waste time feeling guilty on the days I didn’t have energy to write. All that mattered was getting one thing right—the last of my time with him.

Thanksgiving Day, 2012, was unusually warm in Chicago. I’ve always hated Thanksgiving—basically a celebration of genocide and football—but I was super thankful to see Sid get up and sit in front of the door we’d opened to let some air in. I took him outside, something I never used to like to do because he’d always try to escape as soon as he smelled freedom. This time he didn’t even squirm—he just took in the fresh air, looking content. We stood on the patio for a few minutes, then I carried him back in and took the best picture I’d taken of him all year—which would turn out to be the last picture of him ever taken. 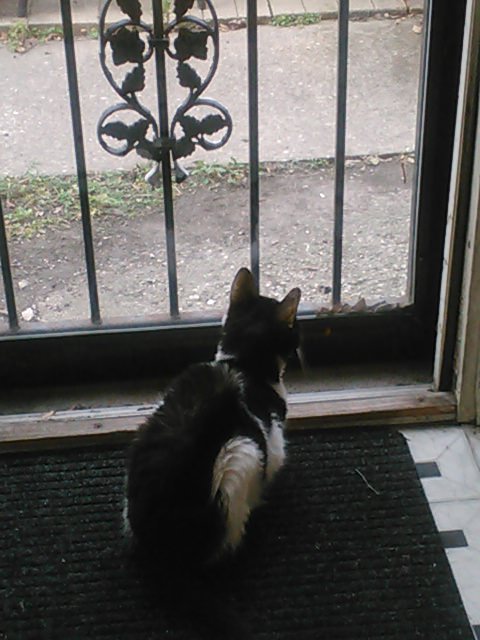 Sid stopped eating altogether the next day. We took him to the vet, where they gave him fluids, but warned me that it might be time to say goodbye. After my next bartending shift, I came him at 3 AM to find Sid lying on the bed on a puddle of his own pee. I went into the bathroom, turned on the loud exhaust fan, curled up on the floor, bawling. Then I pulled myself together and went to talk to my most faithful friend/son/love of my life.

“I love you more than anything,” I whispered to him. “You are the best friend I’ve ever had. I’m here now. I’m here now. I know you’re tired. You can let go. You’re a good, loyal friend. I don’t want you to hurt anymore. It’s OK to let go.” Scott and I carefully carried him upstairs to sleep between us one last time.

The next day was November 25, 2012—exactly one year ago. Sid had retreated into a cube made of flimsy red fabric that our cats usually played in (animals don’t like being out in the open when they die, I kept thinking). I reached through an open side of the cute to thank him for everything he’d done for me. “You saved my life, Sid,” I told him, “and you’ve made it better every day that you’ve been here. We had so many good adventures.”

There was still one adventure I hadn’t undertaken, moving across the country to Seattle, the city I knew I belonged in. I’d been using Sid’s illness as my excuse—not wanting to take him away from his vet. “I promise you that I’ll go,” I whispered to him during his last hours. “I know you have to go, that you can’t come on this adventure with me, but I’ll have it for both of us.”

Around 9 PM that night Sid’s breathing suddenly changed—it sounded as if he was having a severe asthma attack and gasping for air. It was a Sunday and the vet wasn’t open, so we called a veterinarian friend who lived five minutes away who had offered to drive over at the drop of a hat to evaluate if Sid was in serious pain. I cradled Sid in my arms and told him over and over how much I loved him while we waited for her. When she got there, he was already gone.

She helped me arrange him in his bed so he looked like he was sleeping and cut the softest pieces of his fur—right behind his ear, my favorite place to pet him, so I would always have it to pet when I needed to. Then she let me show her pictures and tell her stories about Sid because I didn’t want to cry, I wanted to celebrate his life.

I used to be so scared of living without Sid that when he was nine, long before his illness, I got his paw print tattooed on my leg. I’m happy to have that, but even without it, Sid’s imprint on my life was so big that I always feel him with me. Even in my new place across the country that he never saw. I kept my promise to him and went on that next adventure, and I still talk to his picture when I need a reminder to be brave, or to take care of myself—not necessarily because I think he’s my “guardian angel” now, I don’t know about all of that. What I know is that he grew me up and showed me how important it is to pay attention to what I need and want. He didn’t just save my life, he taught me how to live. ♦