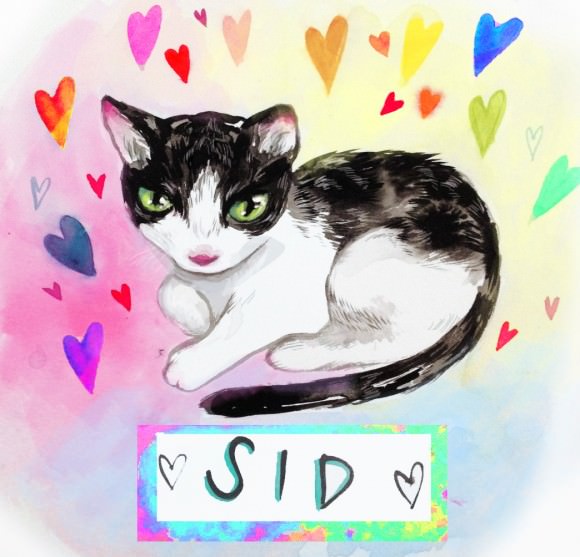 I met him at the North Riverside Park Mall in early July, a couple weeks before I turned 16. My friend Katie and I had been wandering from store to store, just aimlessly killing time, and were on our way to the food court when we were stopped in our tracks by a vision in black and white (my favorite color combo), with big green eyes, a pink nose sporting a single freckle, and pointy ears and white paws that were way too big for his tiny little body. The cat and I locked eyes, and he let out a commanding meow.

Katie and I didn’t have to consult each other; we both just marched wordlessly into the pet store and headed straight for his cage. We wiggled our fingers at him through the bars; he head-butted our hands and brushed his whiskers against them. We asked a store employee if we could visit with him in one of the closet-size rooms reserved for prospective-adoption speed dates. I imagined I’d get to cuddle with him for a few minutes, and he’d purr and rub his little body up against our ankles. Instead, his response to freedom was to run around like a punk in a mosh pit, a little black-and-white blur. He was just so happy to be out of his cage, and watching him lifted the weight that had been sitting on my lungs for months.

I had decided I wanted a cat a month earlier, when Katie and I were watching Sid and Nancy, the movie about the tragic romance between the Sex Pistols’ bassist and his girlfriend, for the millionth time. We were obsessed with the way Nancy always screamed, “Siiiiiid!” (by our count, 88 times over the course of the movie), and we decided that Sid would make a great cat name because you’d have an excuse to scream it all the time. Shortly after that, a friend of a friend found kittens under her house. She and I didn’t really get along, but she said that I could have one. She revoked the offer when she found out what I planned to name it; she had called the kittens Peter, Paul and Mary after the folk group and was offended by my plan to turn her hippie cat into a punk. This near-miss only fanned the flames of serious kitten longing in my heart.

Before you call me totally shallow, let me assure you that my desire for a cat went beyond my need to bestow this name upon him. My first serious relationship had just ended after months of emotional abuse (of, not by, me), and I was feeling pretty lonely and sad. I was drinking too much and cutting myself. I would often talk to Katie on the phone late into the night about my problems and hers, and when the conversation touched on stuff that upset her, I would hear her call her cat, Razar, over. I didn’t have anyone around to give me that kind of comfort, and I longed for it.

Watching Sid zooming around in circles at the pet store, I laughed long and hard, something I wasn’t sure I knew how to do anymore.

“I think this is him, Steph,” Katie said.

I knew it was dumb to even look at a cat in a pet store, since they generally get their cats from commercial breeders, whose practices are often less than ethical, and there are so many homeless pets in the world. The two cats I’ve gotten as an adult were rescues, but at the age of 15 I was a lot more impulsive than I am now. One look at that little black-and-white bundle of fur and I was a goner. My heart broke when they put my new friend back into his cage. He needed out, and I needed him. I only had 40 dollars in my pocket and he cost 80, so when my mom came to pick us, I dragged her into the pet store and told her the only thing I wanted for my birthday was this specific cat.

My mother pointed out that we already had a cat—a 10 year-old gray tabby named Snuggle—but she was partial to my mom and would ironically never snuggle with me. (Not that I could blame her—I was five when we got her, and had a penchant for putting her doll carriages.) My brother had gotten a dog for his 11th birthday, but I hadn’t had pet of my own since my guinea pig died in eighth grade. It was only fair, I told her, that this kitten should come home with us. The combination of my pleading look and Sid’s little freckled nose poking through bars of his cage broke her down and she wrote a check on the spot without even consulting my dad. 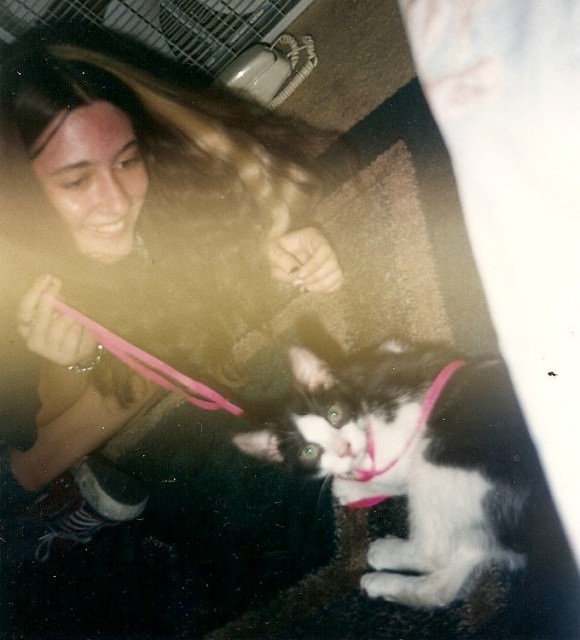 Teenage me and baby Sid playing with a shoelace.

Some of the only pictures of me smiling in high school are from that summer, after I got Sid. Instead of forcing him into doll carriages, I inserted Sid into the trappings of my teenage life, snapping pictures of him with a pair of Doc Martens and a Flipper CD or with an index card that read “I’m a feminist and so is my cat.” I dressed him up in pink rhinestone collars and my black studded bracelets. I chased him around the house, screaming, “Siiiiiid!” and it was as much fun as I thought it would be. I was still depressed, I was still angry, but coming home to a kitten who is eager to play made it easier to get through the hard days.

When Sid was a year and a half old, I graduated from high school and we moved together into my first apartment. He was my main company that first year, and I’m not sure I would have survived my homesickness without him.

Sid and I grew up together. Over the years, no one else has known so much of me. He was there through all of the ups and downs with friends and boyfriends. He listened to me sob and gave me the serious look when I needed to pull myself together. 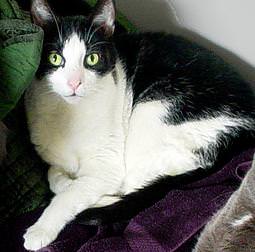 I’ve never known anyone as well as I knew him, either. One New Year’s Even when I was in college, we were at my mom’s house for winter break. Right as I was about to leave the house to see friends, he threw up.

But I just had a feeling. When he refused a piece of cheese (one of his favorite foods), I canceled my plans and took him to the emergency vet, where they told me that his fever was so bad he could have died if I’d waited much longer. It turned out he’d swallowed a piece of Christmas ribbon.

Taking care of Sid forced me to start taking care of myself. One morning a few months before my 21st birthday, I woke up to find him sitting outside the bathroom, where his water bowl and litter box were, staring inside. He looked up at me with his big green eyes, then gazed forlornly back at the bathroom, which I then saw was covered in puke—my own, from the night before, when I had gotten home shitfaced. I was getting drunk three times a week at that point, but this time I was more wasted than usual and had apparently not reached the toilet in time. Looking at Sid’s face, I felt like the most horrible human being on earth. I promised him then and there that I would get my shit together—and promising him meant more than promising myself or a friend or my mother, because he depended on me and me alone.