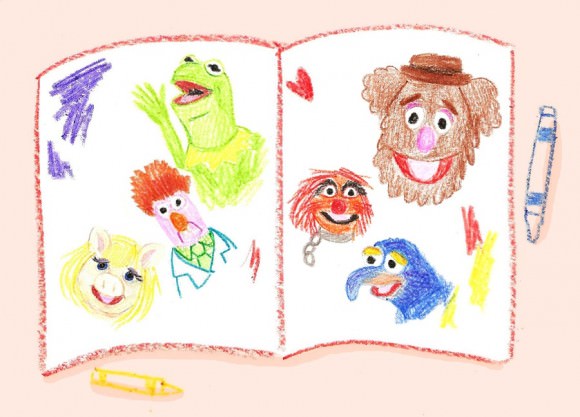 In the 1950s, Jim Henson created the Muppets, a rainbow of puppets representing timeless tropes such as the showbiz diva, the groovy hippie, and the ornery old man. Having been brought floppily to life, this colorful crew quickly lolled and yak-yakked their way into our collective pop-cultural heart—first on a five-minute TV show called Sam and Friends, then on Sesame Street and The Muppet Show, and finally in 10 or so Muppet movies. Along the way, Henson and his fuzzy friends managed to teach me some important life truths: Self-acceptance beats self-pity any day, nonsense noises will always be funny, rock & roll will never die, and this song cannot fail to get stuck in your brain. They also gave us the enchanting, tender revelation of this video, where a doggie puppet pets a doggie puppy while singing a poignant version of “What a Wonderful World.”

There’s some straight-up psychic healing inside the feathered frame of that image!

Henson was a commercial artist and an entertainer, with a desire to use his art to connect with as many people as possible. The best thing about watching the Muppets as a kid was that you could find a little bit of yourself in each character, which made it feel like you had a place in the world no matter how you felt that day or week or year. If you were a bit of a joker, Fozzie Bear made you feel like there was never any joke too dumb to try out.

If you knew you were an artist at heart but hadn’t yet managed to produce anything tangible, you empathized with the Swedish Chef, who never seemed to make anything but a mess in the kitchen.

Miss Piggy reminded me that we can all be legends in our own mind, and sometimes you have to be your own biggest fan.

Even though he acted behind the scenes, Jim Henson had been such a great a part of so many people’s childhood memories that the entire world seemed to mourn his sudden death in 1990. He seemed special and gentle, and that came through in the characters he created. While the actual craft of puppeteering seems mind-bogglingly complex, Henson made it seem totally relatable and fun.

The Muppets are totally endearing, especially because they’re just trying to be part of our human world. As a kid, I sensed that we were going through the same things and that they were responding to the same fears and joys and self-doubts we all encounter. At the same time, Muppets are just ruthlessly happy creatures. I mean, I strive to be the living embodiment of this moment:

Henson was also influential to me as an artist. I related most to artists who dream in large strokes but who also insist on keeping their work accessible to everyone. I want to make idealistic art whose main goal is to delight people—Jim Henson is the one who showed me this was possible.

The Muppets were for kids, mostly, and Henson’s work simplified the world for young people’s sake, but that doesn’t mean he reduced it or dumbed it down—he just pulled the true, simple pleasures out of every Muppety moment, making it still relevant for me today, as an adult. And as I get older, some of the Muppets’ messages become more resonant in my life: I have never needed “The Rainbow Connection,” which reminds me to keep dreaming even after disillusionment, more.

As silly as it may sound, that felt frog plucking a banjo reminds me that I want to belong to a world that values hope, and that whatever I’m doing should be directing me towards that place—a place for “the lovers, the dreamers, and me.” ♦