A guide to getting through the holiday without eating meat or losing your mind. 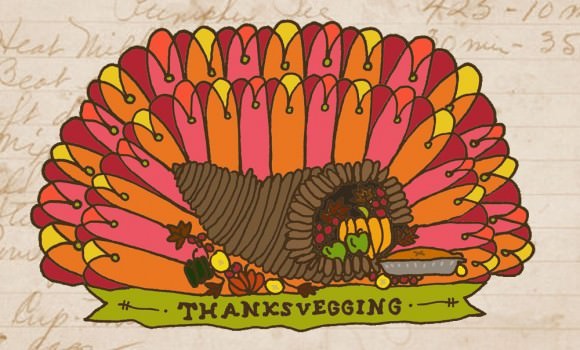 I stopped eating meat when I was 13. I’d been boycotting animal-tested products for about three years, after seeing a Degrassi Junior High episode about animals used in experiments. Then two of my closest friends became vegetarians for ethical reasons, and a few conversations with them about their decision started to make me feel like a hypocrite for eating chickens, cows, and pigs while I was boycotting cosmetic companies for conducting tests on monkeys, mice, and rabbits. I decided to try going veg, and I haven’t looked back for two decades.

My parents took my new diet in stride. My mother made most of our meals, and she made sure to have a bean dish or macaroni and cheese for me when they were having oven-roasted chicken or steak. Then, at the beginning of my senior year, I read The Sexual Politics of Meat by Carol Adams and Animal Liberation by Peter Singer, both of which connected the way people treat and oppress other humans to the way we treat animals. I didn’t want to be a part of any animal’s suffering for any reason, even if that meant giving up eggs and cheese. I went vegan, and that wasn’t as easy for my family to grasp. For months all I ate at home was pasta and salad, because my mother didn’t know what else to make for me. “I don’t know what you’re going to do about Thanksgiving,” she said. “You’ll have to figure that out.”

As of this year, I will have spent half of my Thanksgivings as a vegan, and I’ve learned a lot about making it and other holiday dinners more comfortable, and even enjoyable. If you’re vegan, vegetarian, or transitioning into vegetarianism, there are some things that have helped me that I think could also help you get through the holiday season without sacrificing delicious food or your sanity.

1. Defend yourself without getting defensive.

During my first few months of veganism, I had numerous late-night debates in diners with my meat-eating friends about the merits of not eating animal products. These usually started when I asked the server a question about whether the pie contained dairy products, or when the immature dudes I hung out with at the time made oinking or clucking sounds as they ate their bacon and eggs. Mostly it was light-hearted teasing, but sometimes I got self-righteous and they got antagonistic, which was not fun. I basically avoided talking to anyone that first Thanksgiving because I didn’t want to get into any arguments.

Since then I’ve mellowed out. I still feel as compassionate toward animals and as strongly about not contributing to their pain or suffering, but I know now that this is my own personal choice. I can’t make everyone be like me, especially because I hate it when anyone tries to make me be like them. Riding into Thanksgiving dinner on a high horse (for whatever reason) isn’t a great idea. Instead, be prepared to answer the inevitable questions about what you will or won’t eat in a way you can feel proud of.

2. Be ready to answer, or deflect, annoying questions.

I know all too well how annoying it is to be constantly asked things like “How can you possibly get enough protein/calcium/nutrient-everyone-assumes-only-comes-from-animals?” When I first went vegan, I got these questions a lot. Sometimes I still do. I try to take a deep breath and remind myself that most of the time people, especially relatives, are approaching me out of genuine concern or curiosity.

When someone asks, “But…what do you eat?” I usually rattle off a list of my favorite foods: bean burritos, veggie curry, veggie chili, mac and “cheese” made with tofu and nutritional yeast, and jambalaya. I want people to know that my life is filled with food that, despite what they may have assumed, really does taste good. Last year, after we’d talked about my veg preferences, my sister-in-law made a mashed potato recipe that substituted cauliflower for milk.

If I’m not in the mood to go that deep into what I consume (or I can tell the person is trying to be a dick because they’re hounding me with increasingly judgmental statements like, “Oh, no wonder you have a cold”), I’ll say something like, “It would be easier to tell you what I don’t eat,” and will run through the basic no meat, no eggs, no dairy. These are the same kinds of people who tend to verbally poke vegetarians with rude observations like, “But you’re wearing leather shoes! That’s so hypocritical,” or “Oh, this is just a phase you’re going through,” or, a classic, “Do you think you’re better than us because we’re eating turkey?”

Generally, I try to respond to all of these arguments with something like, “This is my personal choice. I’m not trying to force it on you, and I’d appreciate it if you’d have the same respect for me.” But again, if you’re feeing patient, you can break down your beliefs for them in a calm manner. If someone tries to guilt you with, “Come on, it’s the holidays. Enjoy a meal with your family,” for example, tell them that you are there to enjoy a meal—yours is just slightly different than theirs and would be more enjoyable if they could just let that go.

For questions about nutrition, it helps to come prepared. A book called The China Study goes through a lot of research (conducted through Cornell University) connecting plant-based diets to lowered risks for heart disease, diabetes, and cancer. I’ve also learned a lot from Joanne Stepaniak’s Vegan Sourcebook, which has helpful vegan nutrition charts listing specific nutrients and the plant-based food sources that provide them.

When pressed on the protein question, I like to inform people that a cup of lentils has 18 grams of protein and a half-cup of tofu can have as much as 20. Also, we don’t need even close to as much protein as most people think we do! The CDC recommends 46 grams a day for teen girls and adult women. Using lentils and tofu as examples again, you’re almost there with one serving of each.

Even though no one in my family was truly awful to me about my vegetarian lifestyle, I still dreaded my first few Thanksgivings as a vegan. I had a chip on my shoulder because, back then, no one other than my grandpa—a former baker who seemed genuinely interested in learning about vegan substitutes so he could try to make me some desserts—ever offered to cook for me or expressed much interest in what I liked, food-wise. (I hadn’t yet followed my own advice and told them what I like to eat. That probably would have helped!)

On Thanksgiving Day, while everyone else was feasting on an amazing buffet, I was choking down faux-turkey sandwiches and instant mashed potatoes made with water and vegan margarine, both of which I had to bring myself. This was especially hurtful because when I went to my friends’ houses, their families went out of their way for me and made some sort of vegan dish like a stir-fry.

I realize two things now: One, families are generally more accommodating to guests than they are with one of their own. Two, I was being a huge baby. There were usually 15 to 20 people at our family’s Thanksgiving meal, and I wasn’t special—why did I expect people to bend over backwards to accommodate me? I was not bringing much to the table. Literally. My food totally sucked compared to everyone else’s, but I had made and served that food to myself. I needed to learn to cook.