We left our own families and created a new one. 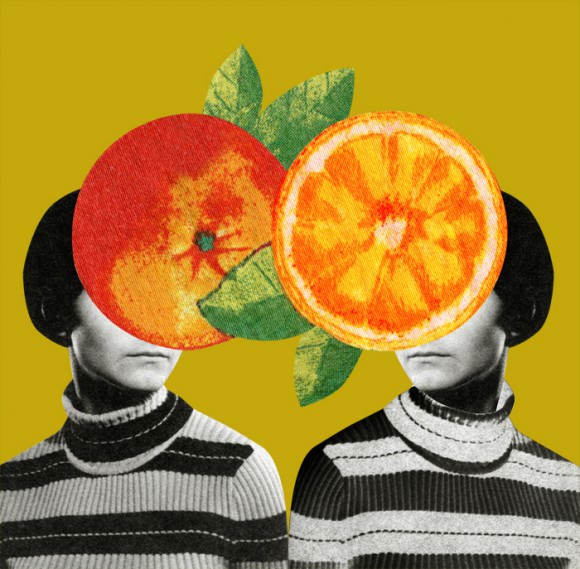 I’m the baby of my family. At home, I’ve always been considered the girl most likely to need help opening her orange. As a child, I was adored by my parents, mothered by my older sister, and generally doted on for my sensitive nature and blond curls. I once cried for three hours when my mom accidentally hit a raccoon with her car. Being the baby was a status I happily accepted until I hit puberty, and then I did everything in my power to reject it. I was starting to get into feisty music and bombastic horror movies, and I didn’t want to be babied anymore. I started dyeing my hair bright colors, wearing ripped stockings and combat boots, and proudly displaying other outward signs of toughness to kill off my sensitive-girl reputation. This served to confuse the hell out of my family, but didn’t dissuade them from their image of me as a widdle sweepy baby in need of a nap. They shook their heads quizzically at my signs of independence and then treated my piercings and loud industrial music like a temper tantrum. I was still a baby, but now I was a baby that yelled and slammed doors instead of cried. The more they babied me, the more rebellious and angry I became.

So I did what most teenagers do: I went out into the world and found an alternative family. No matter how close you are to the people who raised you, it’s common and even healthy to, at some point, reject your family’s affections for those of your friends. This “rejection” can be as minor as wanting to spend Saturday nights out with your pals instead of watching TV with your parents or as major as moving out, but the basic idea is that when you’re little, your parents or guardians are the people you trust with your secrets and go to for emotional support. Very young children would often rather spend time with a parent than with anyone else in the world—that’s partly why they cry when they’re first dropped off at school. Then, at some point, the balance tips, and you no longer sob at the idea of leaving your parents’ house to spend time with people your own age—in fact, you can’t get out of there fast enough. You start to create bonds with your peers, and your family’s grip on your psyche loosens a bit, and your friends become like a second family—for some, they end up becoming the primary family, leaving Mom and Dad behind.

There’s no standard age for when this happens, but it’s usually in high school or junior high. For me, it happened around the age of 16, at a tiny punk club in my hometown. I was brought there by my high school friend Jenny, who introduced me to a group of her friends. There were seven or eight of them, boys and girls. They didn’t go to my school. Some went to other schools, some were in art school, some had graduated, others had dropped out. I liked them immediately. We hung out all night, ending up at a rickety old house where we acted silly and listened to music into the wee hours of the morning. Then we did that again the next day, and the next.

These new friends were smart and interesting and fun to talk to. I felt wonderfully alive and loved and supported when I was with them. They got my sense of humor, thought I was funny and fascinating instead of puzzling and weird, and generally made me feel like a rock star. And unlike my high school friends, some of this new clan were dealing with big-girl life issues, and I won’t deny that there was appeal there too. My life up to that point had been incredibly sheltered and easy (if you’ll recall, I cried for three hours over a raccoon), but these people were dealing with things I had previously seen only on after-school specials: family problems, money issues, unreliable support systems, or just being flat-out misunderstood. Obviously, I didn’t want my new friends to have to struggle with any of these things, but the gravity of what they were going through made our relationships feel more serious and mature than the ones I’d had that were based on just liking the same bands, and that deeper bond felt good.

I don’t know what drew us all to that punk club—maybe we were all having trouble finding meaningful relationships elsewhere in our lives—but we were lucky to have found each other. We quickly became a family, and we supported one another with the same fierce protectiveness and loyalty that blood relations are supposed to. When one of us found himself temporarily homeless as his parents worked out a very intense marriage dispute, we all worked together to find places for him to stay over the next week or so, and I was more than happy to help spearhead the effort. Slowly, I found myself transforming from the baby of my own family to the soothing mother-figure in this new one.

One night in the heady, friend-crushed-out first few weeks of hanging out with this new family, we all decided to sneak into the pool of a nearby housing development after hours—a pretty standard, if illegal, right of passage for teenagers in rural areas. We were all swimming and laughing at how our black eyeliner was running all over our faces, trying to stay quiet and failing miserably, when we noticed some flashlights approaching us. My friends panicked and started scrambling out of the pool, grabbing their clothes and making plans to scatter and meet back up in an hour. Perhaps I was naïve and overly trusting, but I didn’t think we were doing anything too terrible, so I volunteered to talk to the flashlight holders, who turned out to be two security guards.

Dripping wet, with my clothes thrown on hastily over my swimsuit, I approached the guards cautiously, smiling. My friends were frozen behind me. I calmly explained that we didn’t realize this wasn’t a public pool, and apologized sincerely for disturbing them. “We’ll be going now,” I added, and I motioned for my friends to follow me. The guards watched us leave with their arms crossed but did nothing. The rest of the night I was a complete hero, as my friends regaled the tale of me getting everyone out of trouble over and over again.

Maybe part of the reason I was attracted to this group of kids was that I secretly relished the role of TCBing it (that’s Taking Care of Business), but there was way more to our friendship than that, and I did love solving problems. I was care-taking instead of being taken care of, and it made me feel mature and needed and like I was doing some good. For the first time in my life, I was the person others looked to for help starting their oranges. Over the next few years, I nurtured my friends through breakups and family illnesses, soothed frayed tempers and prevented fights at parties, and took care of the people who made me feel so accepted and so loved. If we went to a late-night diner and there wasn’t enough money to pay the tab, if someone needed a ride home from a party or a sketchy situation, I was the one to call. My parents, who thought my new friends were “trouble,” had no idea how mutually beneficial our little family was.

This may make you think that my friends were taking advantage of me and my relative stability, but this was not the case. They were the people who understood me the most and cared about me tremendously, and it was wonderful to feel understood. It was wonderful to reference an obscure movie and have the next line of dialogue repeated for me; it was wonderful to confess that I maybe didn’t like something that was considered “cool,” like a new Pavement album, and have someone respond, “Oh yeah, absolutely.” When it was my turn to have problems, they supported me with ferocious intensity, even when those “problems” were pretty minor, and privileged, in comparison with some of their own. One night during the summer before I went to college, we were all at a wild party, and I got a call informing me that I needed to register for classes at the stroke of midnight (back then it was done over the phone the second the registration day officially began) or I wouldn’t get into any of the ones I wanted. My friends cleared out an entire back room, shut down the music, and blocked the door so that I could register in relative silence. My breakups, my unrequited crushes, my insecurities—all of my problems were incredibly important to my friends. I just wasn’t dealing with as much as they were.

I went on to get a degree in psychology and a masters in family counseling. I have my friends to thank for that. They taught me that I’m good at taking care of people. They showed me that I’m actually responsible and dependable and not actually an eternal baby. They grew me up. Sure, sometimes we fought, like all friends do, but they taught me to stop letting other people lead so easily and to stand up for myself. After nights spent hanging out with them, I went home to my actual family with a bit more respect for how hard it was to be in charge. It didn’t stop me from being a rebellious nightmare of a child, but I understood a bit better what I was putting my parents through, and eventually stopped needing to advertise how grown-up I was, and started acting grown-up instead. That’s something I could have never gotten from my parents.

I’m still friends with everyone from that group, more so than anyone I went to high school or college with, even though we’re spread out all over the country. When we get together now, we hug, eat, drink, compare tattoos, play with one anothers’ kids, and recall the night where we had to exhaustedly take turns driving home from a concert many hours away because one of us had a curfew and couldn’t break it. (We always disagree on who the person with the curfew was.) When we were young, we propped one another up and got each other through each hard-won (but glorious) day. We couldn’t even imagine what life would look like in the future. Now that we’re there, I look around at them and swell with pride. We couldn’t have raised each other better. ♦