The Education of My Mother

Some people want to be moms. Some moms, like mine, aren’t given any choice in the matter. 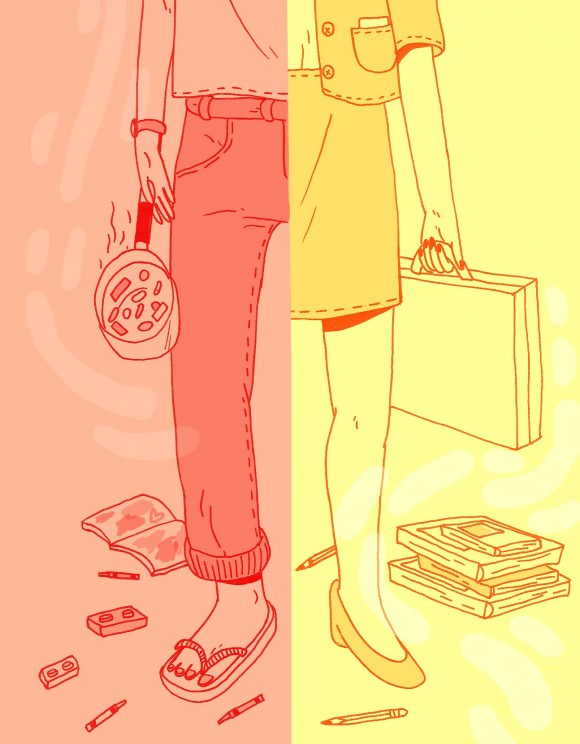 There’s a story involving my mother and a pink snowsuit that surfaces every time I’m on the precipice of dropping serious dough on an ostentatious piece of clothing. It goes like this: One day when I was seven, Mom and I were trawling Sears when I stumbled upon the Perfect Pink Snowsuit. I don’t remember what was so amazing about it except that its bright magenta was identical to the one in the big 64-color box of Crayola crayons. I had to have it.

At the time, our family was about to move from a rental apartment to a small, newly built townhouse in a fast-developing limb of our Toronto-area suburb. Money was tight. It was still early fall, and Mom wasn’t about to buy any new snow pants until the sales began. I was a “good kid,” so I backed down. But by the time the next Sears Days rolled around, the Perfect Pink Snowsuit was sold out. I had assumed the price of getting what I wanted was patience. This was my first lesson in learning you can’t always get what you want.

Do I sound like a brat? Oh my god, I totally was. A lot of kids are. When you’re little you’re the center of the universe, whose borders end with your line of sight—usually no higher than the hip of the nearest adult. This is especially true if you, like me, were lucky enough to be raised in relative comfort. When I think about my childhood I remember Mom’s hands picking bones out of flaky pieces of pink salmon; I remember running circles around my dad’s legs while he waited in line at the bank.

As I grew older (and taller), my universe expanded. I started becoming conscious of whispered conversations behind closed doors or over the phone—signs that my parents had lives beyond taking care of me and my brother. My family can be conservative and inhibited, so I hadn’t ever thought to ask them about who they were before they had us, nor who they were without us.

The driver’s seat is where my mom usually keeps it real. When we’re sitting side by side, not facing each other but both looking straight ahead, it somehow feels safer to broach certain subjects. When it was just her and me in the car, my mother would discuss things neither of us wanted to bring up around my dad, who has always been the more conservative of the two of them. When I argued with my father about typical teenage concerns like boys, parties, and drinking, she always sided with me. Our car rides were her opportunity to ask me whether I’d smoked pot (I was honest: “Yes”) and expressed her anxieties about how my younger brother was doing in school.

These car conversations continued through my teens and beyond. It was during one of these conversations, four years ago, that she told me something that kind of blew my mind. I was visiting my parents for the weekend; she had just picked me up from the train station on her way home from her office job. As the car idled at a red light, my mother, never taking her eyes off the busy intersection in front of us, said, “You know, I never wanted to have kids. I wanted to go to university after high school to become a doctor, but your granddad expected me to get married instead.”

The second half of this confession didn’t really faze me. My parents were both immigrants (born in East Africa, but of Indian descent), and their parents were born and raised in India. While my mother’s father had very progressive views, for that time and place, on raising his daughters—insisting, for example, that all five of his of them get high school educations—in other matters he was very traditional, as demonstrated in his expectation that they all find husbands. After graduation, the only choice my mother was allowed to make about her future life was which man, from a list of pre-approved suitors, she would choose to marry. Opting not to marry at all was inconceivable.

It was the “never wanted to have kids” part that I was stuck on. “Thanks, Mom,” I responded, suddenly a grade-school brat again.

I don’t remember what she said at the moment, but when I asked her about it for this article, her response was to laugh and protest, “That’s not what I said!” But when your mom says she didn’t want to have you, it’s kind of hard to forget. She had more to say about being pushed into marriage instead of college. “When I mentioned going to university and maybe pursuing medicine, I got a ‘no’ from your granddad,” she told me, “because [a medical degree took] four to five years, and by that time you’d be considered too old to get married. It was the ’70s, and plenty of girls in the white community could do what they wanted. But we were living in a society where, by a certain time, girls got married. Not a lot of girls went on to pursue higher education.”

I’m a bit embarrassed to say that it wasn’t until this moment that I fully saw my mother as not just a parent, but an individual human being, with her own life and ambitions and hopes and dreams, some of which didn’t include me. This put all of the mom stuff she had done for us over the years—she was an expert baker, Halloween-costume-maker, story-reader, and stern-but-chill disciplinarian—in a new light. It’s not that she didn’t perform those tasks lovingly, but I now saw that they were obligations, not part of her life goals, and more than that, they were actually preventing her from doing the things she had once dreamed of. The love she poured into them seemed much more profound all of a sudden.

Thinking back now to that front-seat conversation, it seemed to come at a turning point for her. Not long afterward, Mom quit her tedious administrative job to go back to school. She enrolled in a two-year nursing program at a local community college. “I wanted to see if I could do it,” she said the other day. “I was bored with my job. Learning is a big part of my life. I’m always looking to learn something new. And nursing was something I always wanted to do.”

Everyone in the house—I was gone by then but there was still my dad, my dad’s mother, and my little brother—had to make adjustments, most of all my mother herself. “As a mother, being away [from your family] gives you the feeling that something is not right,” she said. But my father was supportive: “He said, ‘If you want to go, you can go. And if you have to give up your job to do it, I am OK with it.’” I remember being told not to mention anything of her plan to her parents, who lived in England at the time. Her father could still make his disapproval felt across the ocean.

The labor in our family had always been divided strictly along traditional gender lines, but now my dad literally had to be taught how to use a washing machine. My brother had to occasionally get off his laptop to do the dishes or scrub the tub.

“It was so hard for me to get into this new way of things being done differently,” my mother said. “Homework cut out my family time. I did the minimum I could get away with in the house and the minimum amount of socializing. Your grandma was a great help, because I didn’t have to worry about cooking. But there was still the shopping and cleaning and laundry.”

I’d already started proofing my brother’s papers, and I started doing the same with my mother’s frequent written assignments too. I got a glimpse into a part of her brain I had never seen before. It felt strange and revelatory to learn her (quite progressive) views on the Canadian healthcare system, or the sociopolitical issues related to HIV/AIDS and mental health. She was a good student, and would proudly report her high marks on quizzes and papers. School opened up her social world, too. She wasn’t the oldest person in her class, but she liked her program because “all the old people didn’t stick together. I made different kinds of friends, from different cultures and countries.”

Toward the end of her program, my mom got an internship at a busy hospital outside of Kingston, Jamaica. We stayed in touch over Skype—I’d tease her about her new tan and the way she’d geek out over the oversize, bush-grown fruits from the market. She was chattier and more expressive during these calls than I’d ever seen her. She seemed incredibly happy. When she returned home, bearing gifts of rum and pepper sauce, this new cheerfulness remained. She talked and texted with her friends more than ever. She joked around more. She embarrassed the hell out of me by talking about daggering (basically a Jamaican form of grinding).

My mother graduated last year. She’s still looking for work, because most of the health care facilities in Toronto area are overstaffed. She’s frustrated but still happy that she pursued her dream. I asked her what she got out of it besides her degree, and she told me it made her world bigger. “I’m more aware of how people behave toward each other,” she said. “You would think that young people are more tolerant about the gay community or other stigmas, but it’s not always true.”

Her education changed the way I see things, too. I feel less pressure to conform now, because I know I have an ideological ally in my mother. I’m more strong-willed about the tougher parts of being a writer, because I saw how difficult it was for my mom to learn how to learn all over again. But, most important, I feel like a kid looking up and seeing a world beyond my own bratty POV. Mom never accepted the limits imposed on her by society because of her gender, culture, and generation: She took back her life. ♦

Anupa Mistry lives in Toronto and writes about music, pop culture, and diversity for publications such as SPIN, the Globe and Mail, Hazlitt, and CBC Music.