How to take the kind of picture that makes people go “AHHHHH OMGGGGGG LOOOOKIT HIIIIIMMMMMM.”

Since Rookie’s theme this month is FAMILY, we’re thinking about our relatives and chosen friend-families a lot. But there’s a V. IMPORTANT someone that we haven’t talked about yet: the unsung heroes of our daily lives who 100% always make us feel happeeeeee. That’s right—our pets. I myself have a three-year-old dwarf bunny named Timothy Maxwell Thumperton, and HE IS THE BEST AND CUTEST AND MOST PERFECTEST BABY MCFLUFFERSON EVER. And if you have a pet, I bet you feel exactly the same way about him or her. Someone you love so much deserves a tribute, right? A mark of respect! Something like…a customized, elaborate photo shoot that shows off their intrinsic animal beauty, perhaps? 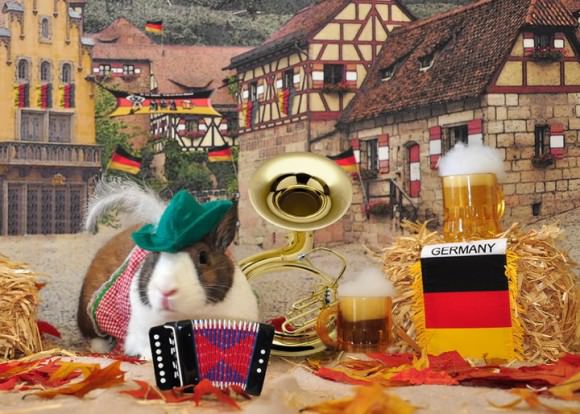 This is my first bunny, Midgeon P. Bundlesworth III, enjoying an Oktoberfest celebration. NO PHOTOSHOP.

See, there are pet pictures and then there are amazing pet pictures. A regular pet pic is something you probably have hundreds of stored in your phone: Your pet was doing something cute, you stealthily grabbed a camera and snapped a picture, and there it was. Fun and adorbs, to be sure, but probably of interest to you alone. An amazing pet picture is one that makes you stop, clutch your heart, and make audible high-pitched squealing noises like “AHHHHH OMGGGGGG LOOOOKIT HIIIIIMMMMMM” or “EEEEEEE HIS LIDDLE HAAAT AHHHH DYING.” A good pet picture is universal; all people, everywhere, are powerless in the face of True Cute. It’s the language we all speak, and achieving this level of greatness isn’t even hard—I don’t care if you’ve got a hamster, a dog, a cat, or a lizard, you have the power! For this DIY, I tried capturing my best friend in a totally new light. It’s deep autumn here in Chicago, and I thought, Wouldn’t Timothy Maxwell Thumperton look SPECTAC as a little Northwoods camper?

WHY YES, HE WOULD. 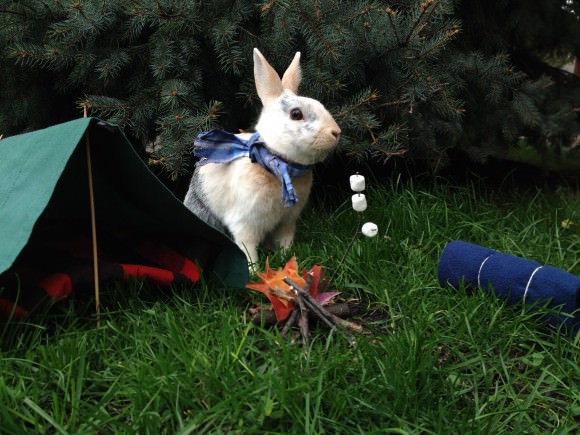 AHHHHHHH OMG. I’ve enlisted some of my fellow Rookies and their best animal pals to help me show you how to set up this kind of elaborate portrait session with your bebe, and we’re not going to rest until the whole world agrees that your pet is THE BEST. A quick note, though: If your pet is SERIOUSLY NOT FEELING IT when you’re setting up a shoot and fights you every step of the way, don’t force her or him to do it. There’s no reason to make a pet really unhappy about something that’s supposed to be fun—if your cat is hiding under the bed and scowling in the dark, it’s not a good time for a photo shoot. But if your pet seems willing enough to model their tail off, prepare to ABSOLUTELY SLAY PEOPLE WITH CUTENESS. 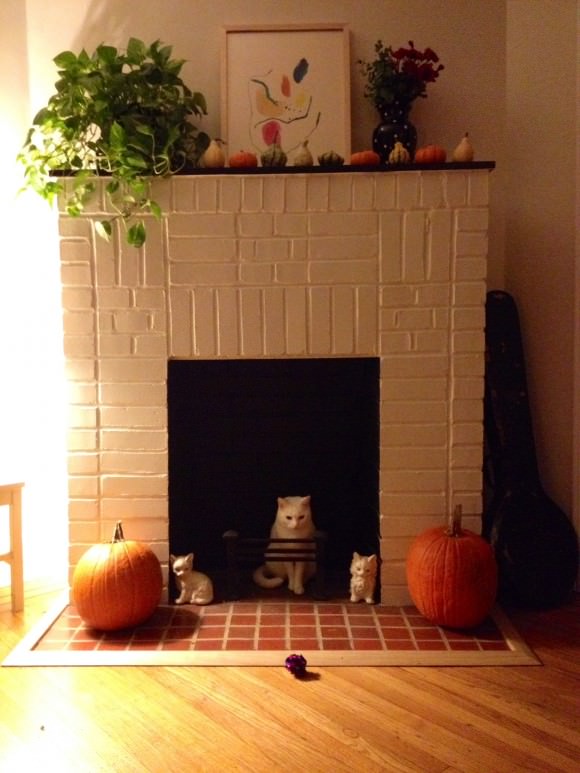 Izzy Hoeckel is incredibly good at blending in with her surroundings.

A theme can revolve around a time of year or a holiday like Valentine’s Day, Halloween, or Hannukah. Or you can base it on an activity, be it as fancy as a tea party or as ordinary as eating breakfast. Just keep in mind that the best themes usually are the ones where the pet in question has been photographed in a human situation, e.g., wearing a sweater or playing an instrument. Other ideas: the first day of school, meeting a new friend, a trip to the beach, etc. The world is your adorably dressed pet oyster! 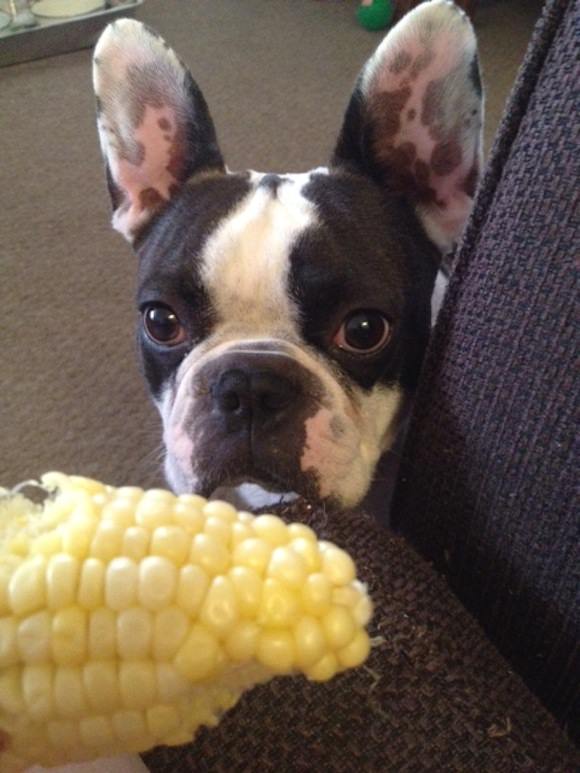 Make/find pet-size accessories to photograph Fido or Fluffy with. Thrift and dollar-store toy sections are goldmines for the kinds of props you’re looking for, but you can also look for stuff around your house! Is your pet big enough to sit at the table like a person? Set the table for a fancy dinner party and photograph her wearing a tie. BOOM! Is Fluffy about to be the guest of honor at a birthday photo shoot? Make him a cat-size b-day hat, frost and stack three cookies so they look like a cake, and add an (unlit) candle! HAPPY BIRTHDAY TO EVERYONE.

I got Timmy accessorized and prepped for his camping shoot for under $1. For the fire, I picked up some twigs outside, hot-glued them together, cut up an old ribbon to make it look like flames, cut off a strip of a flannel shirt for the scarf, and fashioned a tent from an old pillowcase. All I needed otherwise was mini marshmallows, wooden dowels to hold up the tent, and a dish towel tied with string for Timmy’s bedroll. The sky is the limit when making funny little props. We all have imaginations, so why shouldn’t we make a miniature ice rink for a gerbil to “skate” on, hmm? 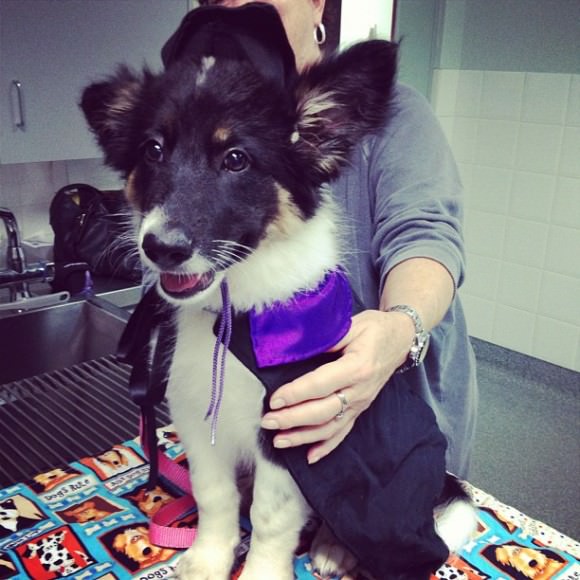 Little pre-made outfits for animals typically cost $10–$50 at pet stores. Let me just give that a NOPE! Thrift stores, dollar stores, and garage sales are your best bets for finding clothes that will fit your pet. Animal companions are easy to clothe because many of them just so happen to be the same size as human children. This is clearly fate telling you to put your dog in a toddler’s dress. Some species-based suggestions:

Hamsters and mice: If you can get a teensy hamster or mouse to wear clothing, I bow to you. I’d stick with cute li’l hair bows and hats.
Lizards, guinea pigs, and rats: Add leg holes to part of a cut-off sweater sleeve to make a form-fitting and chic onesie!
Rabbits: Buy a whimsically outfitted secondhand stuffed animal that’s approximately the same size as your pet and steal its clothes for your model.
Cats and dogs: Many cats and small dogs will fit into baby clothes that are labeled “newborn” or “0–3 months.” For medium-size dogs, try toddler T-shirts labeled up to three years. Hoodies and T-shirts made for children up to about eight years old are good for larger dogs, and if your dog is GIGANTIC, your clothes might look particularly fetching on her.
Pets of all sizes: TINY HATS ARE ALWAYS, ALWAYS GOOD. 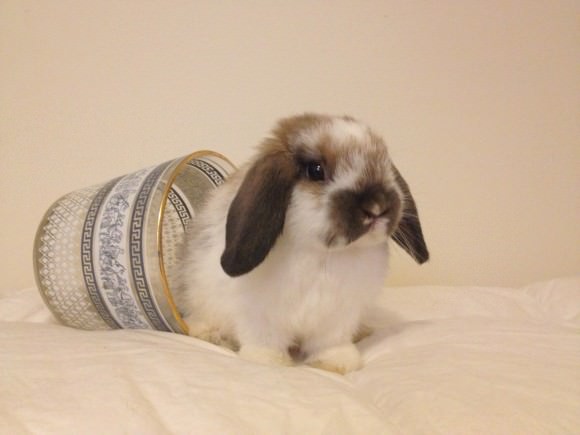 This is a cellphone picture I took of Stevie Wonderbun, the baby bunny my friend Jen just adopted. Where are we? A professional photography studio? On set at Vogue Animaux? Nope! We were in Jen’s bedroom, where I swept everything off her dresser, covered the top of it with a down comforter, and put a drinking glass down next to Stevie to show that she can fit in a drinking glass. The background for your scene doesn’t have to be that elaborate! Neutral backdrops like white walls and solid sheets draw the viewer’s eye riiiight where you want it.

If you do get fancy with your backdrop, arrange everything exactly just so before introducing your pet to the “set.” This reduces the amount of time she has to wait (or decide “I’m over this” and bounce) while you fix, fuss, and rearrange things. Less time spent being made to wear a silly hat and sit still = happier pet. For Timmy’s picture, I made the props and scouted the set location ahead of time. I even took a few practice shots so I would know which angle would best hide the street behind the pine tree and the apartment building two feet away. And no matter where you’re taking your pictures, natural light is best—shoot during the day, near a window, or outside. Natural light makes the details of your pet’s beauty shine—her fur will look its softest and most beautiful, whiskers will be illuminated, and big liquid eyes will have more depth. Plus, shining bright lights directly into your bebe’s eyes is not a good idea.

5. Get your pet ready for his close-up. 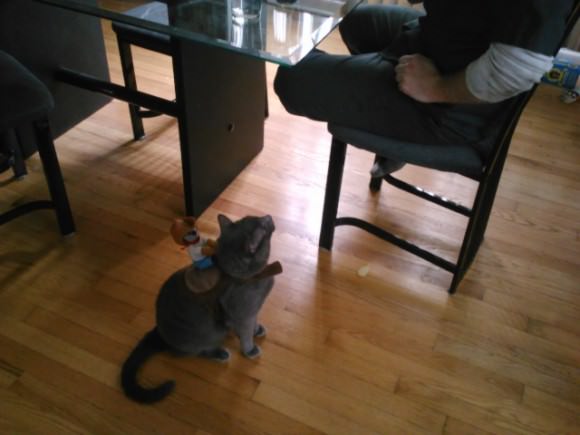 Stephanie says Kaspar Kuehnert is “very food motivated, so he is willing to put up with hats and funny outfits in the hopes that he’ll earn a treat.”

Brush your pet so he/she is looking their fluffiest (Or polish their scales? I have no idea who you’re working with), then gently put the outfit on him. TIP: It can be useful to get your animal used to the idea of wearing something before you put them in it. Run the outfit over their fur several times—snuggle them with the outfit, then let them smell it with their scent on it. (Most animals are rampant narcissists.) Again, keep in mind that you should always stop if they’re really resisting you. 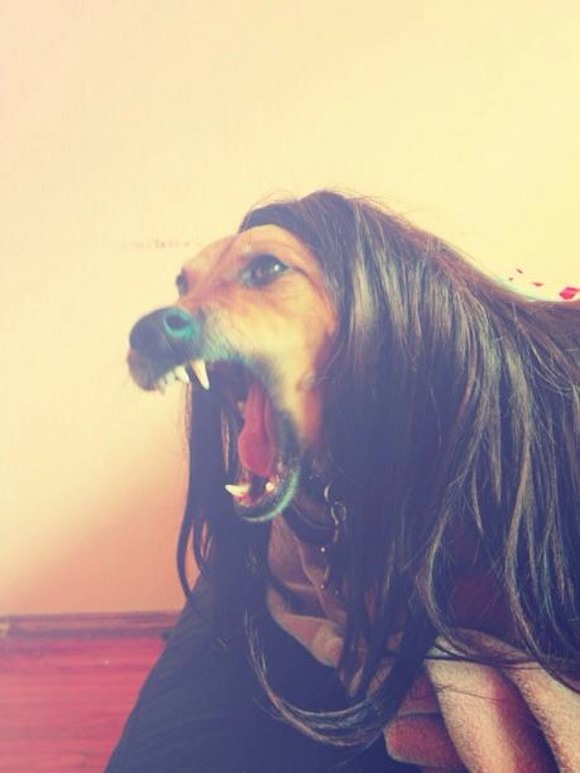 This is Vinicio Molins. His caretaker, María Fernanda, says, “Vinicio’s really into art. He enjoys doing performances such as The Lion King, as seen in this picture, where he’s playing Scar.”

First, BE PATIENT. Timothy Maxwell Thumperton is no supermodel. He’s an animal. He runs, hops everywhere, moves too quickly and blurs pictures, and sometimes he absolutely REFUSES to put on his special outfits. Rude! Timmy actually sucks at posing. I have to take lots of shots for every one picture I’m pleased with, and that’s completely normal. But is it worth it? OK LOOK AT THE TINY MARSHMALLOWS AGAIN AND THEN YOU TELL ME.

Photographing animals is not like photographing humans. Don’t give up! Keep your finger ready on the shutter button, and keep going! If your pet is motivated by food, make sure you have a supply of tiny treats on hand at all times to bribe your pet into sitting, staying, or looking at you. And get as close as possible, allowing us an intimate view of a seriously cute li’l critter—get on your pet’s level and put the camera on the floor if that’s where your dog is, or hold it on the same shelf your cat is lying on. 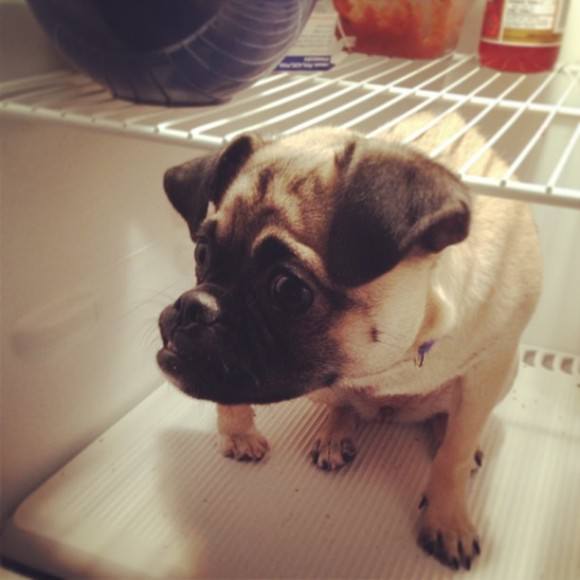 This is Nigel Fitzpatrick. Nigel is actually female, but she’s named Nigel because she has the face of an old man. She is scared of loofahs.

Amazing pet pictures are within your reach! So have fun, and don’t forget to give your bestie a treat when the shoot’s over. Just don’t let the insta-fame go to her head! ♦