Beyond Inversion: How to Make a Benefit Compilation

And the premiere of a rad new one including work from Perfect Pussy and Potty Mouth. 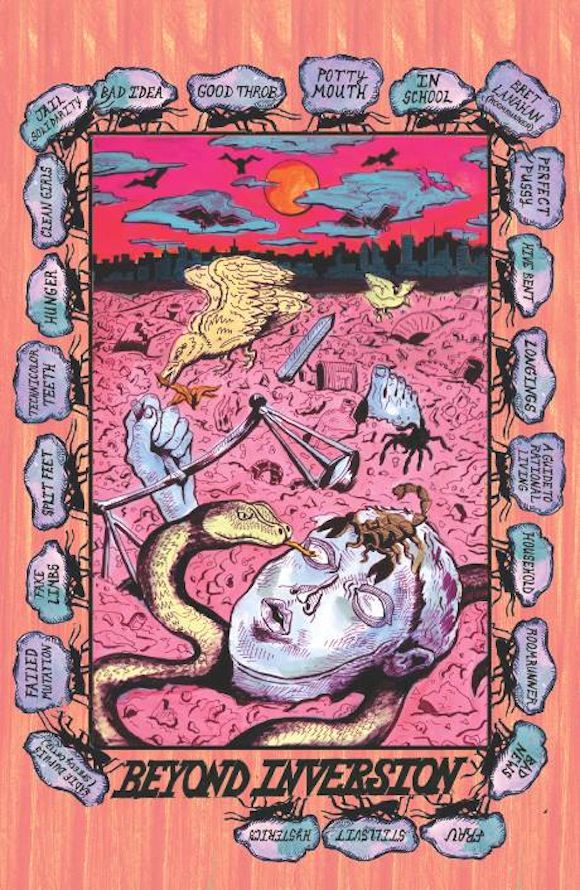 Foldout artwork for Beyond Inversion by Leah Wishnia.

Benefit compilations are collections of tracks from various artists that are sold to help a cause, and they’ve long been an important part of community-based DIY musical scenes: It makes sense for musicians to give back to the places that hold and nurture them, right? These compilations are great for tons of reasons—they’re awesome for you because they provide historical snapshots of those scenes and a chance to hear new tracks from artists you already love (and others you may grow to love), and they strengthen the people and organizations that are doing amazing work around you.

When Sean Gray, who is part of Fan Death Records and the owner of Accidental Guest Recordings, asked me to be his partner in putting together this benefit compilation, Beyond Inversion, I was incredibly honored and excited. While it’s available to stream for the first time here, all proceeds from the sales of the limited-edition cassette and donation-based download will go toward Rachael’s Women’s Center, a Washington, D.C., shelter that’s been providing homeless and formerly homeless women with basic life necessities, support, and professional training for over 30 years. It includes awesome tracks from Perfect Pussy, Potty Mouth, and many other bands, and I couldn’t be prouder of it. And now I’d like to share with you a few tips for putting together one of your very own!

1. Look around your local scene for inspiration.

Sean and I identified the bands we wanted to work with and the organization we wanted to help by reaching out to friends, colleagues, and neighbors. We chose Rachael’s because it’s a longstanding nonprofit that fills a vital need in the community—besides offering practical services and resources to people who need them, it’s also one of the few centers in the country that is equally accessible to trans* and cis women.

Do some research before you decide whom you want to raise funds for. After you find a place that speaks to a cause that’s important to you and check out where their funding comes from, see if they have a specific project that needs money and public attention. It’s best to keep your focus local and practical—big organizations might be flashier and/or better-known, but a lot of powerful work happens outside the spotlight.

From the outset of this project, we also knew that we wanted to work with people we respected completely, which meant excluding work from artists who had histories of abusive and violent behavior. You might not think we’d have run into this issue that frequently, but it came up more than once during the few months we worked on the compilation. Luckily, because we’d spoken in depth about where we were coming from and what our ethics and values were, when it came to making decisions, we knew we could stand behind them.

Don’t be afraid to contact bigger-name artists outside of your immediate community—the worst they can say is that they’re too busy. While some bands have the resources to be able to donate their time and work, most working artists can’t afford to, so be clear about what your budget is.

There have been cases where a bigger band has been able to play a show I’ve set up instead of contributing material to a recording. This is a neat option because their participation can call wider attention to the organization for which I’m trying to raise money. Some bands also choose to do separate fundraisers for the operating costs of the project.

3. Understand how to work with the resources you have.

We kept Beyond Inversion simple and small in order to make it happen. With our budget, we were able to create a pay-what-you-want digital download and a limited-edition cassette tape with a beautiful foldout print and pin by the artist Leah Wishnia. If the cassette sells out quickly, we’re thinking about reissuing it on vinyl. LPs cost more and take more time to make, so if we’d chosen to go that route right off the bat, the project might have died before we had the means to put it together. Take stock of what you have and don’t try to make something you don’t have the resources for.

Since organizing a benefit project is a huge undertaking, it helps to split up the work. I like collectives where everyone has an equal say, but they can get bogged down in minutiae very easily. Even though you might have a lot of people really interested in helping out, there won’t be that many volunteers who have the time and energy to be in constant communication when it comes time to figure out all the small details together. For a project like ours, a core team of two people was enough to get things done. We even found that our friendship grew stronger as it progressed, which was a lovely side outcome that may happen for a lot of you, too.

Instead of posting constant advertisements for the compilation, which could be easily scrolled past and ignored, we chose to interview every band involved and post the interviews on our Tumblr. It helped people learn about the project, the contributors, and our beneficiary organization in greater depth and gave us a non-irritating way to remind people about our compilation. And it was fun too: The interviews we got were smart, funny in many places, and always thoughtful.

And you don’t have to limit yourself to musical compilations—all of these tips can be applied to pretty much any kind of benefit organizing! Putting a project together for charity requires a lot of work, precision, and thoughtfulness, but it’s one of the most rewarding things you can do. We hope you enjoy Beyond Inversion, and we really, really can’t wait to see what you put together, too. ♦

Jessica Skolnik is a freelance writer, labor union archivist, and organizer in Chicago. They play guitar and sing in the band Split Feet; you can follow them on Tumblr and Twitter.