Nothing changed me that summer. 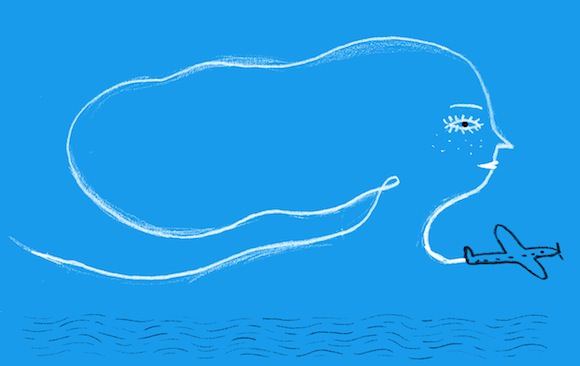 My father hands me an envelope full of cash. It’s the day after my eighth-grade graduation, and we’re at the airport.

“Don’t declare it,” he says, in his soft rumble of a voice. “She will not accept it, so leave it for her to find, yes?”

“OK.” I take the envelope and trace my thumb along the tucked-in flap.

Marge puts a thin hand on my shoulder and bends to kiss my cheek. Then she takes her usual position, one step behind my father, her arms crossed and her weedy body leaning toward him. If she ever touches him, it’s never more than a hand on his arm when he spits Polish curses while driving. I don’t think I’ll be the kind of man who has road rage when I get older.

My father announced that I would be spending the summer in Poland over breakfast on the last day of school. He was sending me to my aunt’s in Bytom, and had gone ahead and cancelled the check for tennis camp. Marge set a plate of oily sunny-side up eggs in front on me. The orange juice tasted sour.

As I found out later, my aunt had just had heart surgery, and my father couldn’t take the time off himself to look after her. He felt guilty, so he sent me with 500 dollars across the Atlantic to make up for it. He didn’t ask my opinion, so I assumed there was no discussion to be had. I remembered my aunt as red-haired and loud. She was what my father called eccentric, which meant he thought she was at least a little bit crazy.

I didn’t tell anyone about the change in my summer plans. I signed everyone’s yearbook just “Andy,” in my worst possible handwriting. I went to Laura Daniels’s pool party and hung around the picnic table, staring into the bowl of cheese curls that everyone was sticking their wet, chlorine-scented hands inside. I graduated middle school, said See you next year, and then left without explanation. What was I missing? A summer spent sweating on tennis courts and changing my clothes three times a day, at least, drinking Pepsi and watching TV in the basement, and hanging around Rita’s Italian Ice like some girls were going to talk to us?

At the airport I start toward security, and when I turn back my father and Marge are already walking away. They don’t stay to see me off, like in movies when the family waves and waves long after the shoes are off and the kid is past the metal detector, and then stays to watch the plane until it’s just a piece of glitter way, way above them.

Eight hours later, I’m in Warsaw, but I don’t see it because I’m stuck in the station waiting for my train, which leaves in an hour. I try to remember what the city looked like when I was here five years ago. I sit at a café table and eat a dry croissant. I’m starting to smell.

I think of the time at camp when I wiped my nose on my T-shirt and realized I smelled like my father does after he mows the lawn, like a combination of cafeteria food and sweaty gym mats. I ran to the bathroom and rubbed paper towels covered in pink gel soap under each armpit, but the smell was back by the time Marge came to pick me up. I was so embarrassed I could barely mumble hello. That was before they were married, and she still had the beat-up green Mercedes. I could almost feel the smell leaving my body and filling up the car.

A few days later, I found a stick of Old Spice in my medicine cabinet. It’s probably the nicest thing she’s ever done for me. That and the time she gave me a copy of the picture of my mother that my father kept hidden on the top shelf of his closet. It was her wedding portrait. She’s wearing a plain white dress. Her hair is up, and she’s smiling. Marge left it on my desk for my 13th birthday.

When the train pulls up to the platform in Bytom, my aunt is standing there and waiting for me. She grabs me by the shoulders and pulls me into her soft bulk. She kisses my face. Then she tugs down the front of her blouse right there in the crowd and makes me touch the outline of the pacemaker lodged right above her vast chest. I notice the gray of her bra. I look away. “See that, Andrzej? See what they do to me?”

In the car, Aunt Aga tells me about the surgery—a fever dream of knives, coming to under the cracked blue heaven of a ceiling in the hospital. She’s a retired English teacher, so she speaks to me in the language I know better than Polish, which was what we spoke at home when I was little. But my father stopped speaking it to me years ago because, though her grandparents were from Poland and she knew how to cook the things my father liked, Marge doesn’t understand a word.

She insists we drive the long way to her apartment, so she can show me the town she and my father grew up in. She shows me things I almost remember from before: the park where she’d go with her boyfriend when they skipped religion class; my father’s and her childhood home, where my father once played ball in some shadowy courtyard that’s just beyond my line of vision. She swears to me it was once less shabby. We pass bakeries and corner stores and flower sellers in brightly colored kiosks. We pass blackened and crumbling townhouses that were divided into small apartments after World War II, and rows upon rows of huge apartment blocs: some painted in tangy blotches of lemon, lime, or peach, others just left in their plain plaster gray, all of them covered in graffiti. We pass street-side trees thin and splintered as used toothpicks and ancient oaks that, instead of adapting to the city, rage through it, growing into and around iron fence-posts and breaking up sidewalks.

My aunt apologizes and tries to explain again how much nicer everything looked when they were children, when horse-drawn carts brought fresh potatoes and coal right to their apartment. I nod at all of this and hold my arms tight at my sides because I’m afraid to let the smell get out.

We pull up to one of those endless gray blocs. On the ground floor, the entrance is damp and empty, and all the lights are out. The elevator we ride to the eighth floor has no door. We watch the levels plummet downward as we pass them on our way up, as if they are moving and not us. My suitcase barely fits in there with us.

I remember being here years before, in her tiny apartment. On our left is the kitchen, where more than once this summer I will see her stirring our dinner on the stove while easily opening the refrigerator on the kitchen’s opposite wall. The bathroom is across the hall, behind the front door. Then there is the living room, with its small breakfast table, and her bedroom, with its door always shut.

Her son, whom my father and I almost never see even though he sells cell phones in Brooklyn, sits frozen at age five on the coffee table, next to a vase of dried yellow flowers. There is a frilly lace thing decorating the table and a silver ashtray. There is the vague, nauseating smell of old tobacco. The shelves, which house an English-language encyclopedia set from 1986, are lined with photo albums. A small TV sits in the corner, the couch sags across from it. Everything is the same muted ’70s brown. The carpet is a little long, like it’s in need of a haircut. She sits me down at the little breakfast table and disappears into the kitchen.

I quickly unzip my backpack and put the envelope on the table, then think again and put it on top of the TV. No—I move it to the bookshelf above the couch. As I sit back down Aunt Aga appears with a bowl of hot broth. She places it in front of me. “Eat,” she says. I stir the soup and some dark chunks of meat float to the surface. She pulls the ashtray closer to her and lights a cigarette. She watches while I chew.

“You are here to spy on me. I know,” she says through the smoke. “But don’t tell this to your father.”

It was her neighbor who found her sitting at this table almost a month ago, turning blue. He carried her down the stairs and drove her to the hospital where they promptly put her on the operating table. “The heart,” she says now, “is a ridiculous muscle.” She exhales and looks at my bowl. “Are you done?”

“I think so.” She picks up the bowl and takes it to the kitchen and I hear a splash as she dumps the broth back into the pot. I imagined Marge grimacing at the thought. Marge is a good cook, and that is important in a woman, I remember my aunt telling my father when she came to the U.S. for their wedding. Woman. I always get stuck on that word. I don’t think I’ve ever said it. I stick with girl or Mrs. or lady. Never woman. It makes me think something beautiful, of my mother. Her hair halfway down her back, one of the only things I remember. And the color blue, I think of, always. Springtime sky. A fresh change of sheets. The feeling when sun comes through your eyelids.

My aunt comes back into the room and puts some coins on the table. “Go buy the milk. And flowers for your grandparents.”