A dreamy, haunted version of the Pretenders’ “Birds of Paradise.”

Our Picnic at Hanging Rock 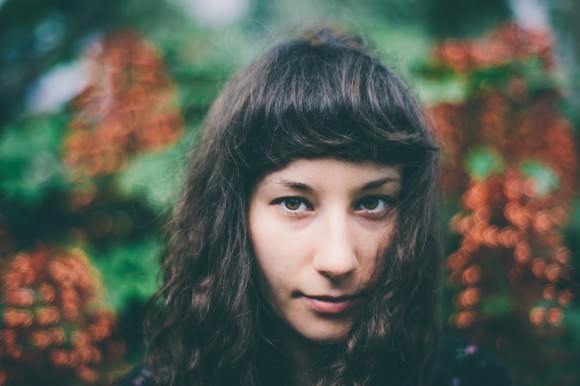 Emily Reo is a one-woman music team: She writes her own dreamy pop songs, sings them in a beautifully mellow, sauntering style, backing herself on a lo-fi synthesizer, and then produces them herself. So it’s kind of funny that she’s also a member of the FMLY collective, firm advocates of the DIT (do it together!) mentality. Her new album, Olive Juice, is available at Bandcamp, and it’s the perfect soundtrack for staring out a window and daydreaming.

For our theme song this month, Emily did a ghostly reworking of the Pretenders’ “Birds of Paradise,” just in time for the spookiest time of the year. We talked to her about Halloween costumes, her belief that we’re all FMLY, and weird pop songs about the ocean.

PUJA PATEL: How did you approach making that Pretenders song your own?

EMILY REO: This is going to sound so amateurish, but I had never really listened to the Pretenders before this! Their music is a total 180 degrees from the kind of music I make or generally listen to, so it was a really awesome experience to take something completely unlike anything I do and translate it into a sound that I feel reflects what I do. It’s a great song, and I’m really happy that my introduction to such an important band was through an intimate experience like this.

Do you ever feel limited by others defining your music or aesthetic?

Yes! I’m really glad you brought this up. A lot of the pop music that I love happens to be made by really talented women who could probably produce their own material, but men are doing it for them. I feel like women should try to do as much as they can without a man’s help in this industry. I totally understand the reason for wanting to work with a well-known, successful male producer, but it’s not making it easier for new female artists or producers to gain recognition in an impossibly competitive field, or teaching women that they’re just as capable as anyone else. Grimes is a big inspiration—she writes, records, and produces all of her own material, and often comments on men trying to produce for her. A lot of times after I play a show, a guy will come up to me and ask if I wrote everything myself—is that something a man would ever be asked? It’s also frustrating to be listed as a singer/songwriter. Since I’m a female playing under my given name, the assumption is that I must be singing sad love songs with an acoustic guitar, when I’m actually using 10 electronic boxes and a synthesizer to play weird pop songs about the ocean. Being properly respected is an ongoing struggle, but I hope that we will help defeat this treatment by relying as little as possible on help from men when we’re just as capable of doing something ourselves.

I love the idea of FMLY and the do-it-together mentality behind it. Can you tell us a little bit about how you all came together?

I became involved with FMLY about four years ago. I connect with FMLY because it provides me with a set of ideas on how to interact with people both outside of and within my community—treat everyone with respect, work together, create positive and intentional change—and I think it’s super important that folks everywhere, no matter how big or small their town, feel a sense of community with their neighbors. It’s not about moving to the most popular cities to be a part of something that already exists—if you have ideas and inspiration, why not start something where you and your friends live?

You yourself have moved a lot over the last few years. Has that affected how you write and what you write about?

Environment has definitely affected both the process and the content of my writing. In my hometown, Orlando, I had only been writing music for a little while, and was in a different place literally and figuratively—I feel like my work definitely had some naîve, adventurous, and dreamy qualities. It was really hard to write in New York and in Boston, due to sharing confined spaces, having roommates, and a general lack of inspiration. I’ve only been in L.A. for a few weeks now, but one of my biggest hopes is that this move will provide me with the resources I need to work on music, art, and photography.

Do you do Halloween?

I love Halloween! Probably even more now than when I was younger. I never even liked candy until I was an adult! Plus, fall is my favorite season. This time of year is just magical. ♦

Puja Patel is a writer whose work appears on Pitchfork, MTV Networks, and Stereogum and in Spin and Rolling Stone, among others. She lives in New York and would like to give you a high-five just because.