No matter what goes wrong, you will live to bone another day. 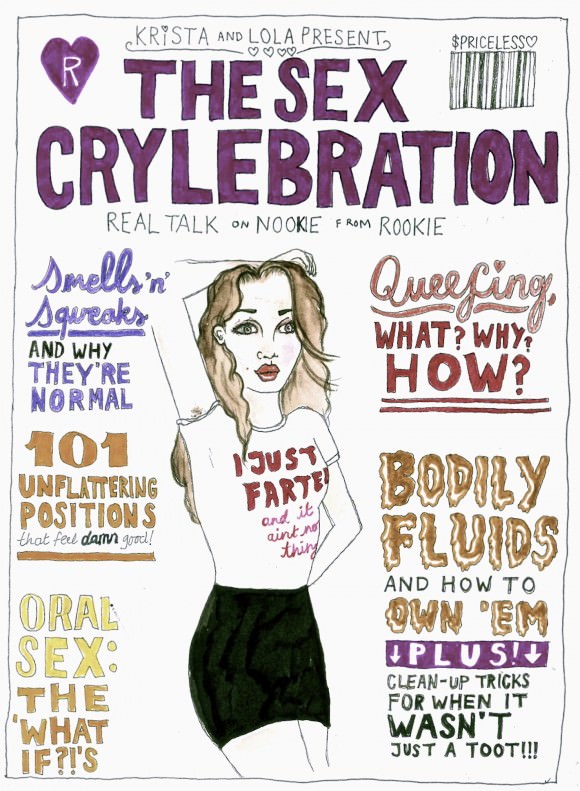 Close your eyes and imagine the most embarrassing thing that could happen to you during sex. OK, now come back here. What did you think about? Does it involve blood? Barf? Farting? Pain? …Pee? Someone seeing you naked and in a weird position for the first time and just baaaaacking away slooooowly and then grabbing their clothes and running out the door? OK. Get a good, horrible picture in your mind of what would be a worst-case scenario for you. Now take a deep breath, grab a cup of mint tea, and sit down right here *pats comfy couch* with us, and let us tell you a story.

It goes like this: Once upon a time, two people rubbed their genitals together, and nothing embarrassing happened. No one queefed or farted. Candles literally lit themselves all over the bedroom. No one’s parents were home and everything smelled like roses and everyone felt sexy and didn’t go past their limits, and when it was over, the sheets were still white as a snowy dove’s wing and everyone high-fived and it was the best and that was what happened the end.

HAHAHA NOPE! The above scenario has probably happened like five times in the history of sex. Sex CAN be perfect and not make messes and not be interrupted by weird-seeming things, but—especially when you’re first starting out—that’s unlikely to happen very often. Sex is a vulnerable and kind of strange thing: We get naked with one another and see each other at odd angles and…fluids happen, making it almost unavoidable that something we weren’t necessarily prepared for right at that second will occur at some point during the proceedings. But take heart! While no sexual encounter is likely to be perfect, it’s equally unlikely that all of your WORST SEXUAL FEARS will come true. Some will, though, and here’s what you need to know about those: They will not be nearly as bad as you imagined.

You know what we’re talking about: All those nightmare scenarios that have been playing themselves out in your head ever since you heard about sex. A lot of them were formed by rumors passed around in overheard whispers: “She says she made this horrible noise down there and it was super loud” or “She was giving him a blow job and she tried to swallow and she threw up on his dick.” WAIT, WHAT?! We can totally hear your imagination going into overdrive from here. WHAT IF THAT SORT OF THING HAPPENS TO YOUUU?!? Sex is new and freaky enough as it is without having to deal with the idea of weird noises and barfing in the presence of your partner. Vomiting while in a state of undress with someone you like? You’re getting pre-motional just thinking about it.

So we put our heads together and thought of a few of the most common things that make people cringe during sexytimes. Things that cause rumors, things that cause your face to burn just hearing about them. And now we’re gonna give you the true stories on all of them.

So, whatchoo afraid of, bb?

“What if I look/sound weird?”

When you’re having sex, you and your partner(s) are doing things you would not normally do (hopefully). Would you normally put your tongue in someone’s ear and then trail your hands down their chest, ending with your hands cupping that person’s genitals, all while stark naked and making little happy noises? I mean, in your everyday life, maybe in line at the store? No. During sex? Yes.

So, the way you look and sound during sex is normal…when you’re having sex. Sex is all about what’s happening in the moment. Not what happened last week, not what’s coming (hopefully you, hyuk hyuk) later. Sex is about the present tense, and being into what you’re currently doing and experiencing.

If you’re still worried about how you look and sound during sex, here are three more things to keep in mind:

1. By the time you get to the having-sex stage of making out, your partner is already so turned on that they are NOT thinking, Huh, she looks really weird from this angle or She is really sweaty, ew. NO. Here is what your partner is thinking: Holy fuck, we’re having sex, I am having sex with a girl, oh my god she’s so hot, whoa this feels great. This is a not a guess; it is a guarantee.

3. Are you busy critiquing what your partner looks like from every angle? I’m betting you aren’t. I bet you have never thought, like, Huh, Skylar looks SO DUMB bent over like that, it’s ridiculous, actually. When they took off their clothes, you probably weren’t like, Oh wow, this is the opposite of what I thought this person would look like naked. Your guess was probably pretty close to reality, right? Right. What’s going on in their head is not so different from what’s going on in yours, to tell you the truth. What if you knew that your sweetie was feeling weird and self-conscious? What would you do to help them feel comfortable? How would you help them understand how hot you find, say, their butt, or their jaw? Do that!

Are you still freaking out about making a weird face/noise when you come? If you can, ambush this fear by calling it out: “I’m a little nervous because I get self-conscious about how I look when I come.” The look of disbelief on your partner’s face should tell you everything you need to know. This is a maneuver Lola calls “breaking the sexy fourth wall.”