Was reading books a way to get lost, or disappear? 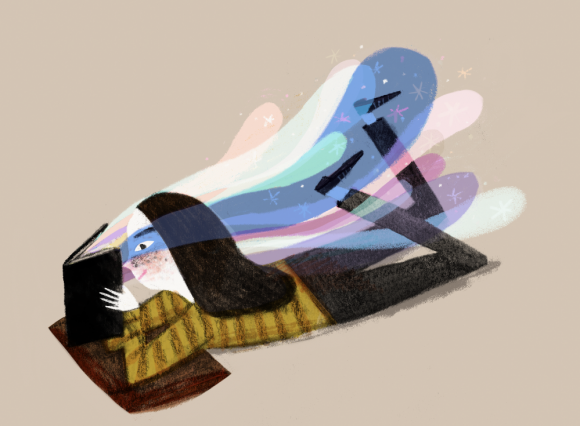 Stories have always been an important part of my life. I started writing in middle school, when my chronic anxiety was becoming a big problem. I wrote a story about a princess whose city is taken over while her parents are away. This girl was lost, scared, and alone, but she was the only person who could lead a rebellion and drive the enemy from her lands. I obsessed about her, so much that I developed a chronic ache in my shoulder where she had an arrow wound. Instead of feeling anxious about my own life, I could feel anxious about hers. And when she and her friends won their battle and regained the city, I was able to celebrate with her. Her story was an escape when I desperately needed one, a way to channel my anxiety into something harmless and fun, all while proving to myself that my real-life problems weren’t that bad.

Plenty of people before me have obviously talked about the sense of comfort
and escape fiction can provide. We get attached to—even obsessed with—
reading and watching stories because they take us somewhere we long to go, the
kinds of places we can’t visit in our regular lives. In middle school, my bond with
everyone I considered a close real-life friend was shaped by our mutual and often
reciprocal tastes in books and movies. We devoured the Wheel of Time books together, dissecting Robert Jordan’s fantasy world and spinning theories about the characters. We watched Monty Python and the Quest for the Holy Grail more times than I could count. We even started writing our own series together, all set in the same land. I had my own princess alter ego, and my friends had knights, mages, and even a servant as their fantasy counterparts. As we lived our day-to-day lives of school, sleepovers, and chores, we each had our own inner adventures, which we dutifully wrote down and shared with each other. We were heroes, saving kingdoms and sometimes even finding romance (with purely imaginary boyfriends). Growing up in rural Ohio, a place lacking in obvious opportunities for adventure, and too young for most life experiences, my friends and I made our own excitement. Stories gave us access to experiences we’d never had, and many we would never have.

Around the same time, I was reading and rereading The Baby-sitters Club books so many times that I felt like I knew Kristy, Claudia, Mary Anne, Stacey, and the others just as well as my real friends. Not only did they have truly amazing friendships, but they had all sorts of experiences that I could only dream about, like riding horses, starring in ballets, and traveling across the country. I loved reading about their adventures—at least the first few times I went through the series. But after that, it stopped being so fun. Living vicariously through them started to make me depressed. I had to stop reading them for a few weeks so I could get over the fact that I didn’t live in Stoneybrook and I’d never get to be a part of the club or hang out with these awesome girls.

Back then, fiction was often too real for me. I would get immersed in a book or a movie or a TV show, become obsessed with the world described within it, and my real life would gray in comparison. Years later, some of these same books disappointed me by not being real enough. The first time I ever understood anything about grief was when I read a Baby-sitters Club book called Mary Anne and the Memory Garden, about a girl named Amelia who dies in an accident. When her classmates broke down at seeing Amelia’s empty desk, I broke down; I felt some fraction of what they were feeling, and my world became a bit bigger (and sadder!). A bit later, Bridge to Terabithia and the movie My Girl made me revisit the same feeling, and face the fact that death could, and eventually would, happen to me and my friends.

But in high school, when my childhood friend Leigha died, I thought about those stories—especially Terabithia—and realized that their descriptions of grief were in many ways inaccurate, or at least incomplete: They never warned me that I wouldn’t react strongly to the news but would then cry for months even when I wasn’t thinking about her, that I would feel sad even when I was happy, or that I would develop an overwhelming aversion for the trend of posting messages for the dead on Facebook. Even the strongest emotions elicited by fiction tend to fade. But in real life, emotions like pain, fear, and love just keep coming.

When I’d moved on from The Baby-sitters Club, I began devouring any and all books set in boarding schools and universities. I was still in high school and longed for the experience of living away from home; I couldn’t wait for college. Prep by Curtis Sittenfeld and Light Years by Tammar Stein were my bibles. And then there were movies and TV shows set in universities, particularly Buffy the Vampire Slayer’s middle seasons, which would not exactly help me understand college (my schooling involved very little vampire slaying), but still gave me a healthy excitement for university life. Roommates! Secret trysts! Drama! These stories even got me excited for the hard stuff.

I brought Prep, Light Years, and a couple of similar books with me when I moved to college, where my obsession with residential-education lit abruptly ended—not because school wasn’t as awesome as I’d dreamed, but because once I was living it, I didn’t need to be reading about it. When college stopped being an exotic, unattainable goal, these stories lost their glamour. And anyway, it turned out that all the secret trysts and complicated dramas I’d been so entranced by were purely fictional. My college years were all about test taking, reports, therapy, essays, Humans vs. Zombies LARPing, writing, movie sessions with my roommate, and writing my thesis. The school part of college was more stressful than the stories made it out to be, and the personal-life part was WAY less complicated and drama-filled. And I was totally OK with that, even if it meant that my favorite books were suddenly way less intriguing.

As real life got busier and more complicated, I didn’t need to turn to fiction so much to escape. I’ve had some real adventures of my own, I’m learning more effective ways to deal with my anxiety, and I have a better grasp on the differences between fiction and reality. I still can’t live without having some sort of fictional entertainment in my life, and I bet none of you could either—there’s nothing like getting swept up in a great story. It is so satisfying to temporarily enter the lives of those who have more responsibilities, more risks, and more zaniness. Their stories might be scary, funny, sad, or uplifting, but it’s nice to know that when it’s over, you’re right back where you were, and maybe a little smarter to boot.

I’ve never been kissed, gone on a date, or survived a breakup. I’ve never been a hero, never had to use my wit or my skills to save my friends or save the world—I’m just cruising along for the ride. I’m mostly OK with that—I have great real life friends, and I’ve been pretty successful in school and work. But sometimes I just want to know what it feels like to be a member of the Baby-sitters Club, or train to be a knight alongside Alanna in Tortall, or be a student at Hogwarts. I’m never going to have a harrowing adventure in an exotic land. I’ll never have the responsibility of saving an entire nation. I’m okay with that—more than OK, because I don’t want that kind of responsibility hanging over my head. I’m less OK with not being best friends with the Baby-sitters Club girls, but I actually had a pretty cool group of real best friends growing up. And to tell you the truth, I don’t think I would have liked babysitting that much. ♦