Have you ever seen my favorite Wikipedia page? I’ve clicked every link up in there, and have learned about some truly beautiful places from days gone by. Abandoned theme parks are eerie and beautiful for so many different reasons. What really gets me about them is thinking about how in the parks’ operational days, SO MANY PEOPLE must have crowded their streets and roller coasters and teacup rides, and now they’ve been quietly given back over to nature. Here, in no particular order (except that the first one is my all-time favorite), are some of the most incredible relics of family fun gone by, described by me and rendered beautifully in drawings by Leanna. 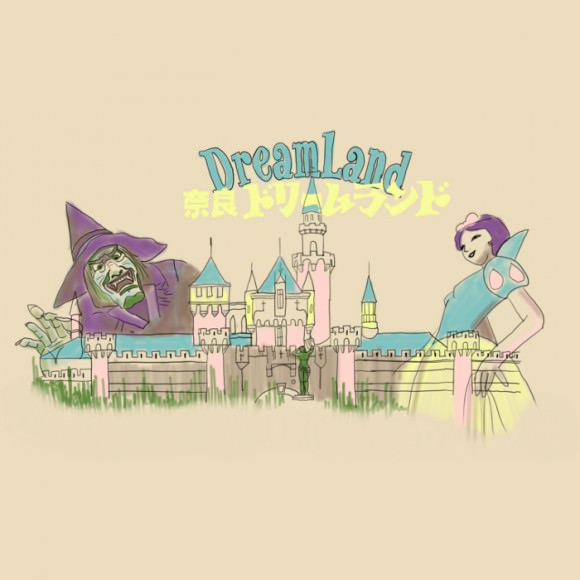 All illustrations by Leanna.

Nara Dreamland is an unsanctioned carbon copy of California’s Disneyland built in the Nara Prefecture, just outside Osaka. It is maybe the best preserved of all the abandoned parks I obsess over. It opened in 1961, and from the start it was obvious that it was a giant ripoff, not just because of the nearly identical pastel pink castle (which is allegedly even bigger than the one at the real Disneyland), but also the monorail, Main Street, and scads of rides, like the Jungle Cruise, that looked suspiciously familiar. It’s been vacant since 2006, when it was shut down because of almost nonexistent attendance, and has since somewhat ironically become one of the most popular abandoned theme parks in the world, attracting so many trespassers that it now requires constant surveillance. Gorgeous vines have overtaken the park’s roller coasters (one of which was actually modeled after a ride from a very different park, Coney Island’s famous Cyclone coaster), and every aspect of Dreamland is rad and surreal—like, AN ABANDONED JAPANESE FAKE-O DISNEYLAND ACTUALLY EXISTS IN THE WORLD, SERIOUSLY, HOW IS THIS EVEN POSSIBLE, I LOVE LIFE SO MUCH? It’s a dream and a nightmare rolled into one apocalyptically beautiful dream destination. I’ve spent hours upon hours gazing at pictures of it on the internet, unable to face the harsh reality that I don’t actually live inside it yet. ONE DAY. Fuck a house. 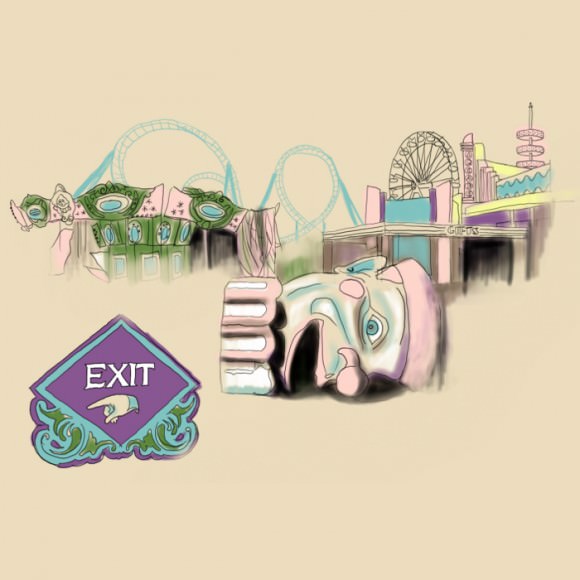 Until recently, the tragedy that caused this park to close was announced on a huge sign that was easily visible from a nearby highway. The billboard, which had for years advertised special deals and attractions, was stuck on the last message the park put up there: CLOSED FOR STORM. That was right before Hurricane Katrina.

Relative to the loss of lives, homes, and livelihoods, Six Flags New Orleans was one of the least important things destroyed by that storm, but it still hurt. A lot of its rides are still standing, albeit corroded irreversibly by salt-water flooding and damaged beyond repair by colossal winds. It’s really something to see now, littered as it is by the skeletal, graffiti-covered husks of old rides.

The good news is that after years of neglect, the park was recently rented from the city for use as a movie set, and more filmmakers are following suit in the next year or so, which will bring some much-needed money into the city and let more people experience the ghostly beauty of this place. 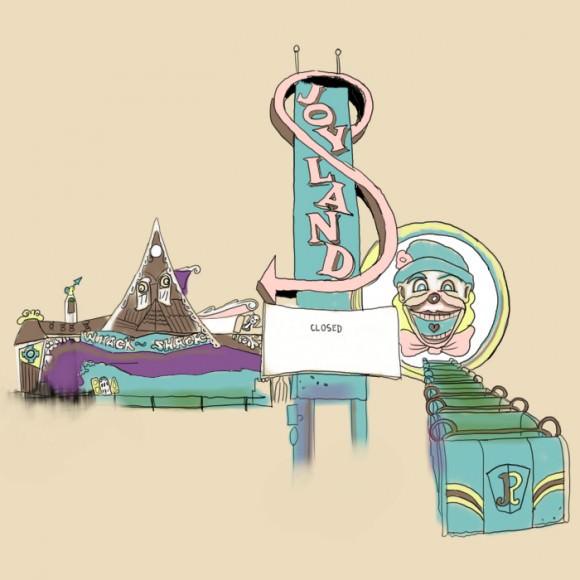 Over its nearly 60-year lifespan as an active park, Joyland Amusement Park housed tons of classic (slash-ancient) attractions, like a one of the first carousels, carousel, a wooden roller coaster (the only one in North America built using 20th century technologies), and one of the two oldest Wurlitzer organs known to exist (Joyland’s was made around 1905). Sadly, the things that made Joyland so special are the very things that brought it down—rides that are older than your parents, while very beautiful, require constant, expensive repairs and refurbishings, and since they weren’t exactly built to accommodate modern thrill-seekers, people got bored with them, and attendance at the park dwindled to the point where spending all that money to keep the rides running just didn’t seem worth it anymore.

There’s an avid group of Kansans who remain devoted to restoring Joyland to its former glories. Calling themselves Restore Hope, their goal is to reopen the park within five years and re-establish it as a cultural institution in Wichita, which is probably the sweetest thing in the world, ever, and which someone (maybe you?) should definitely make an uplifting movie about. 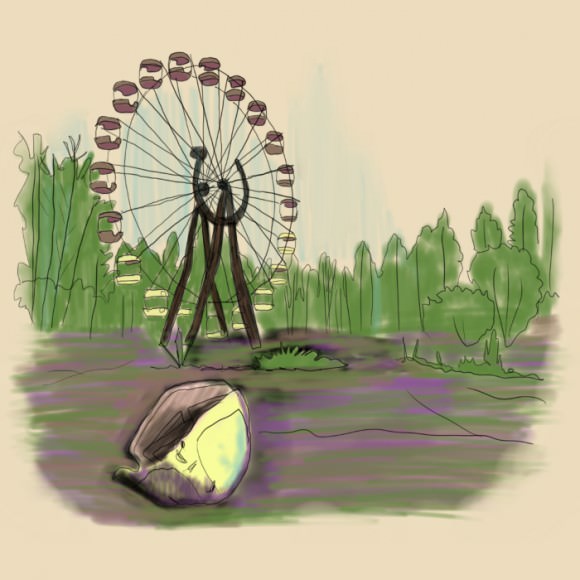 This amusement park was abandoned after being open only a few hours. That’s because the worst nuclear-power-plant disaster history had just occurred the day before in nearby Chernobyl, and the city had to be evacuated. Fallout from Chernobyl caused massive fires that released fatal levels of radiation throughout the atmosphere, surrounding the plant, leaving Chernobyl and Pripyat, home to this park, completely and irreversibly uninhabitable.

Pripyat wasn’t fully evacuated until a few days after the disaster, and some citizens allegedly sought distraction at the brand-new Pripyat Amusement Park for a few hours on April 27, although the park wasn’t officially slated to open until May 1. It’s unclear whether it did actually open for business the day following the explosion, as there’s seemingly no verifiable evidence of this anywhere, but it is confirmed that people did use the park at some point—there are photos of the ferris wheel, its feature attraction, in use, and of people lining up in front of other rides—and the predominant theory goes that city officials opened it the day after the explosion to distract residents as the government decided what action needed to be taken.

After the city was evacuated, the almost entirely unused amusement park was left behind for good, and became a symbol of the nuclear disaster. Although there’s evidence that there’s still some radiation in the park’s ruins, many brave souls have gone in to explore the overgrown, but otherwise largely undisturbed, facility.The ferris wheel remains the derelict city’s most iconic landmark, and visitors are known to leave stuffed animals in its cars in memorial tribute to Pripyat and its people. So spooky and fascinating and sad. 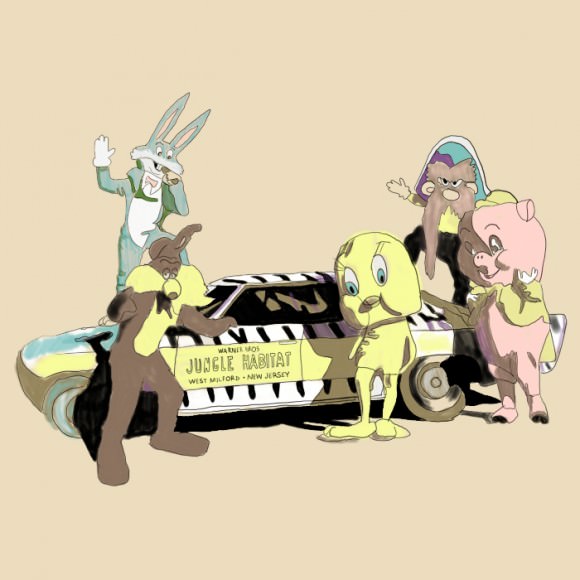 Whatever your ethical stance might be on zoos, I think we can probably agree that animals like rhinoceroses, zebras, and African lions totally don’t belong in a flimsy, easily escapable, “family friendly” amusement facility in suburban New Jersey. Warner Brothers learned this the hard way in the mid-1970s, when they decided to take part of the woods of West Milford and make it a drive-thru zoo park where lions, tigers, and bears (oh my!) could run right up to your car and maul the heck out of you if you decided to open your window. SIGN ME UP, right?!

I say it was easy to escape from because West Milford residents reported sightings of kangaroos, emus, and baboons intown throughout the ’70s. That only two reported attacks took place at the park during its four years in business seems like a miracle.

Unfortunately, the animals at Jungle Habitat were in far more danger than the people: They lived in unsafe, neglectful, and abusive conditions, and when the park closed due to bad publicity in 1977, many of them were left there to die. Awful.

Nowadays, old cages, ticket booths, and other vestiges of Jungle Habitat are the only evidence of this park, which once served as the home for about 1,500 species of animals. The state bought the 800-acre property in 1988 and returned it to its former glory as a woods that’s very popular with hikers. The only animals living there now do so by choice. Jungle Habitat itself obviously deserves a big “fuck you man, seriously,” but I’m glad NJ kept the cages up to remind people how NOT to treat animals. ♦