A celebration of online archives. 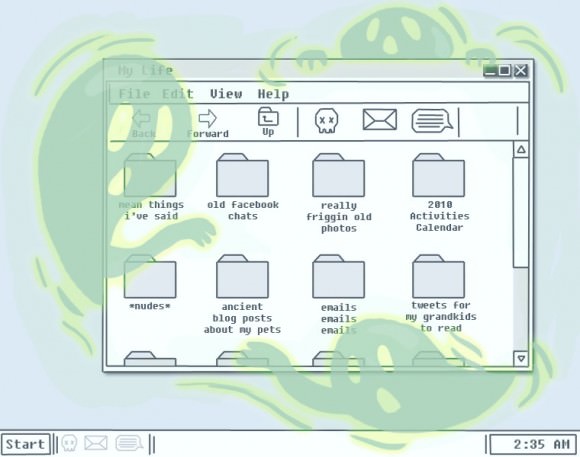 One of my favorite things about the internet and computers in general is that, unlike a parent or a best friend or a significant other, they never forget a single thing about you. You can download your Twitter archive and scroll back through all your old posts, your most embarrassing middle-school pronouncements displayed dispassionately alongside logistical conversations with friends you’re meeting up with, and your Facebook messages, photos, and wall posts are all similarly archived. I realized recently that I had been using my iCal since 2010 (aka my sophomore year of high school) and, because of my tedious record-keeping, I can see what exactly I was up to almost every day for the past four years, whether it was a geometry quiz or seeing Best Coast live. My Last.fm account has kept track of what I’ve been playing on my iPod and my iTunes since I was 14—down to the minute of the day I listened to each specific song. For example, it’s fun to think about exactly WHY I listened to “Kiss Me” by Sixpence None the Richer 37 times (in a row!) on April 18, 2010. And I can remember how fun Gabby’s fondue birthday party was December 3, 2011, even though that weird dude made her cry and I sang Lesley Gore to her. 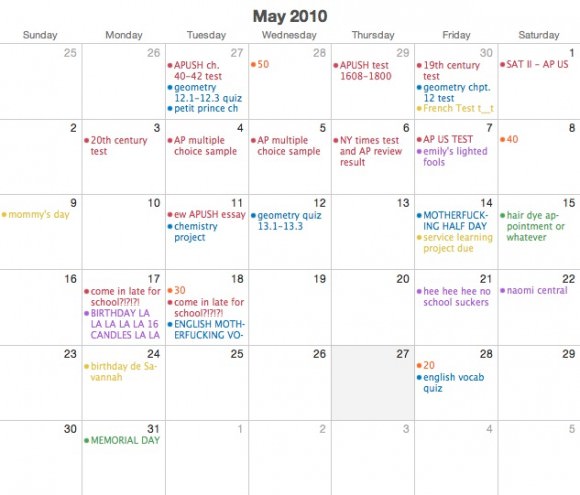 Back in the 1930s H.G. Wells wrote about a “world brain,” an encyclopedia of all “important” recorded information that everybody could share and make use of. As he described it, “this World Encyclopedia would be the mental background of every intelligent man [sic] in the world. It would be alive and growing and changing continually under revision, extension, and replacement from the original thinkers in the world everywhere.” Dude was talking about the internet, for real. His thinking was that since each person’s consciousness is the sum of her memories, if we could all agree on the past, we’d achieve a global consciousness that would bring about something like world peace. “Without a World Encyclopedia to hold men’s [sic] minds together in something like a common interpretation of reality,” he wrote, “there is no hope whatever of anything but an accidental and transitory alleviation of any of our world troubles.”

I feel like the internet works like this on a personal level. I regret never having kept a diary as a teenager, but I kind of didn’t have to, because I’ve been blogging and tweeting in some for since I was 13, and my electronic trail serves as a digital diary more detailed than anything I would have forced myself to scrawl at the end of each day. Some of it is hard to look at now—like my whiny girl-hate tweets when I was 14, or the dramatic selfies I posted to my Blogspot in ninth grade—but reading through my old tweets, blog posts, and Facebook updates helps me understand how much I have changed, or not changed, through the years. It’s funny and weird to post something now and then discover that I posted almost exactly the same thing at a younger, less experienced age. There are also unfunny parts: bits of a first love here, bits of self-hatred there. Without this record to consult, I might forget this stuff, and I don’t want to forget any of it—it would feel like deleting a piece of myself. And since everything I type into a computer gets archived somewhere, I don’t get to pick and choose what goes into this virtual journal. With a written journal, I’d probably try to make myself look better to myself, and I’d definitely leave out seemingly mundane details like a Slowdive song or a routine chat with my best friend from three years ago, but these are the very details that most strongly trigger memories of what was happening IRL then. Looking back on them is like getting into a mental time machine.

Everybody always tells people, especially young girls, not to post things on the internet that you wouldn’t want everyone—including future potential employers and criminal-court judges—seeing, because what’s on the internet is out there forever. Everybody loves that word: forever. We’re told that our old pictures and tweets will come back to haunt us in our adulthoods, and there is plenty of evidence that this can indeed happen. Friends of mine have been fired from their jobs because of things they’ve tweeted (#rebellious). The same thing happened to Kimberly Swann a few years ago because of a Facebook status. People have been banned from countries based on Google searches.

And I do worry sometimes that that nude I sent could GET OUT into the blogosphere (ew!) one day, or that the terrible thing that one time I said about a person I love will be circulated by someone aiming to do me harm. California’s state senate apparently worries about this too (not in relation to me specifically): They recently signed a bill that will let California teens erase pieces of their online footprint. On one level, I love the idea behind this law. As long as revenge porn exists, and as long as kids are committing suicide over cyberbullying incidents, it’s important that legislators take Internet and the harm it can do to young people seriously, even if this particular law is pretty limiting in terms of what can actually be deleted. But there’s another part of me that resists the idea of deleting all but the most seriously harmful internet ghosts. I know the urge to cover up embarrassing or potentially controversial things you’ve post on the internet, but I say leave it all up there. That stuff (a) is what makes you human, and (b) will be the funniest stuff in the world to you in a few years.

I have never thought twice about writing about my life online, probably because, like you, I grew up with the internet. People—especially adults—love to roll their eyes at how much we teenagers are willing to share, and at our constant status-updating, @ checking, tweeting, ’stagramming, and selfie-taking. They use these activities as “evidence” of our supposed narcissism. But I think many if not most of use all these stops on the internet as storage spaces for our memories. I mean, I’m going to take the picture of my dog anyway, but putting it on Instagram will ensure that even if I delete it from my phone, it will be housed in a server somewhere else. That way when I’m like, “Where is that photo I took of my dog wearing a hat on 9/25/13 using a Rise filter?!” I will know where to find the answer. It’s less of a “pics or it didn’t happen” situation than an “Oh, it happened, I just want the pic for my records” guarantee.

Frankly, I hate the idea that we can’t be honest online out of fear that we won’t get a job. I’m actually not too worried about this, though, even though there is SO MUCH of my life online. In a few years, there will be no one applying for a job who doesn’t have at least ONE embarrassing thing—a compromising photo, a drunk tweet, an overly dramatic blog post—come up in a Google search of their name. Any employer demanding a perfectly clean internet record is going to have a hard time finding people to hire. We’re all in this forever-archived world together, so let’s just accept one another and all of our dimly-lit Photobooth selfies, right?

Having said all this, I have to confess that I recently started having internet-shame nightmares—and by nightmares I mean literally waking up in a cold sweat à la some messed-up horror-movie dream montage. In one, a friend publishes our entire Gchat archive, containing everything I’ve ever said about anybody, as a book. In another, a mean thing I said about someone in an email is forwarded to everybody I know. In all of them, something I thought was private is made very, very public. I know where these are coming from: A year or two ago, a close friend decided he was going to publish, in book form, his entire Facebook archive as some kind of weird art piece. At first I was pretty much on board, but I started thinking about all the deeply personal conversations we’d had over FB message, and it started to feel pretty creepy. He did not end up selling his archive. Maybe he will, though, and I guess that’s just another internet ghost floating out there.

The internet is absolutely filled with ghosts. Your breakup notification on Facebook is a ghost. Your drunk tweets are ghosts. That blog post about being depressed is a ghost. I’d rather live with these ghosts than forget about them. This way, when I’m an old woman I’ll be able to look at that a picture I took of my taco during that one lunch back in college. I mean, seriously, think about your grandkids reading your tweets. Damn, I bet you’re scared now. ♦