How to Kill K 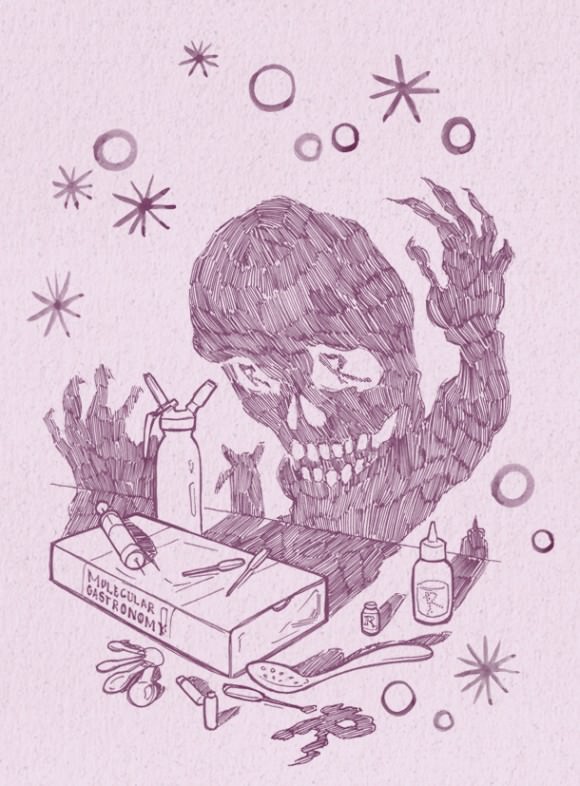 The worst way to kill someone is to plan to do it. Anyone would realize that if they thought about it for five seconds. But that’s the problem with people: They don’t think.

If I ever kill someone, that won’t be my problem.

Why aren’t we having fun? Keely thought. They were supposed to be having fun. But all she wanted to do was leave. Too bad this was the month Cooking Club was meeting at her house.

She checked her phone: A billion new pictures had been posted of what a great time the rest of the world was having at the Halloween party across town, at Krystal Harkin’s house. Halloween party. Keely could have killed her— Krystal knew that Cooking Club always met on the last Friday of the month. She had obviously scheduled her party specifically to steal away Keely’s guests. Of course, this month’s theme wasn’t helping. “Molecular gastronomy”—what did that even mean?

“It’s modernist cuisine based on applied principals of chemistry and physics,” Parker Schuler had explained blandly during morning announcements. Keely could have killed him, too. Why did he have to make it seem so boring? It was like he wanted everyone to desert Cooking Club. In the end, only four people had shown up: Parker the humorless; his (equally humorless) chemistry lab partner, Brooke; that social drifter Sophat Taing; and, most randomly, the German exchange student Karl, who seemed to show up everywhere although no one ever really invited him anywhere.

Keely watched boredly as Brooke funneled steaming black liquid into a pair of beakers. She couldn’t follow what they were doing, but it apparently involved “cyropoaching” and a “motorized aspirator” and “lobster spheres.” Parker and Sophat were looking on attentively, double-checking Brooke’s measurements. Keely was pretty sure Brooke was dating one of them, but she couldn’t tell which. In theory every girl wants two guys fighting over her, but not if the guys are Parker and Sophat. Talk about a lose-lose situation.

“When is something going to explode?” Keely said, breaking the silence (and Brooke’s concentration). She just wanted something to happen. Her parents were out of town, so they could explode whatever they wanted. Then she could put it on Instagram and everyone at Krystal’s dumb party would regret choosing that over Cooking Club.

“Nothing’s going to explode,” said Parker flatly. “Not if we use the equipment responsibly.”

Keely rolled her eyes. They were 16 years old; what was the point of doing anything responsibly?

Karl was flipping through the recipe folder, pointing at words and reciting their names in English and German (“Cucumber. Gurke!”). As Keely watched him, she felt slightly creeped out that this foreigner she barely knew was in her house. Karl was incredibly good-looking, Keely couldn’t deny that. His hair was light blond and wispy, like a child’s. His face was childlike too, with a kind of blank innocence. He wasn’t like the other guys, who paraded themselves around school like it was a stud auction. Maybe that should have made him an exciting novelty, but for some reason it didn’t. People just ignored him.

“Disperse iota carrageenan and xanthan gum over cold milk,” Parker read from the recipe. “Then blend and vacuum-seal.”

Karl spoke up suddenly: “How to kill K.”

Keely looked up from her phone. “What did you just say?”

They’d been ignoring Karl all evening, but now they all turned to look at him. He held up a piece of paper with a recipe typed on it. “How to kill K,” he repeated in his deep, sonorous accent. “Is vat it say here. I find among ze recipes.”

Keely leaned forward and snatched the paper from Karl’s hand. It was a recipe—but an unusually complicated one. There were almost 20 steps; it would probably take an entire day to make. At the top, clear as day, the words HOW TO KILL K were printed in bold, all-caps letters. It reminded Keely of a Law & Order episode she saw once about a serial killer chef who murdered restaurant critics.

“Omigod!” said Keely. “I bet it’s a game! One of those mystery party games! Whose idea was this?”

“What are you talking about?” Brooke asked, leaning over the counter to examine the paper.

Keely took out her phone and snapped a picture of the recipe, thrilled that something cool enough to post on Instagram had finally happened in her life. She captioned the picture “MURDER on the menu 2nite!” and clicked Post.

“Did you just post that on the internet?” said Parker. He looked annoyed.

“Can’t we just focus on cooking?” said Brooke, rolling her eyes. “These recipes are complicated enough without being distracted by some stupid game.”

“We can do both!” Keely insisted. “Come on, this is way more exciting than just cooking.”

“Well, it’s my house,” said Keely. She slapped the recipe onto the counter. “And I say we’re playing this game.”

Two hours later, one of them would be dead.

How many Rs are there in Allegra’s illustration at the top of this page?